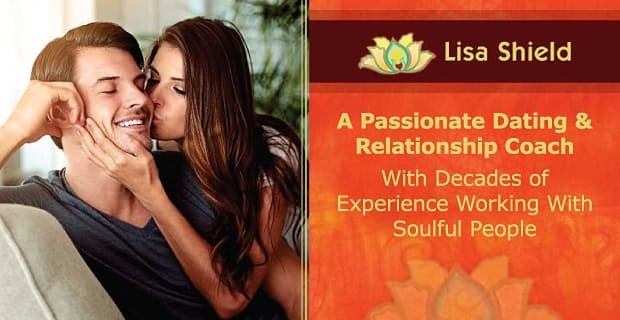 The Short Version: Dating and relationship coach Lisa Shield has lived a beautiful love story. She left a bad marriage, studied spiritual psychology, dared to be vulnerable, and found her soulmate after years of hard work and self-development. Now she shares her unique dating techniques and philosophies with romantic souls in Los Angeles. Lisa teaches single men and women how to speak up for themselves, build confidence, and create lasting, loving relationships. She also counsels couples through bumps in the road and offers brilliant takeaways on emotional hurdles in all aspects of life. Through private and group coaching sessions, Lisa Shield can guide you to find love in your own heart and in someone else’s eyes.

Lisa Shield had been married to a man she describes as a pathological liar for 13 years when she realized she couldn’t spend her life dealing with his issues. She wanted to work on herself. So she left that toxic relationship and sought a fresh start. She got her master’s degree in spiritual psychology and spent years developing stronger core values and a higher self-esteem.

After years of training and self-exploration, Lisa Shield became one of the country’s first dating and relationship coaches.

Then, just before turning 40, Lisa realized she was finally the best version of herself, but she didn’t have anyone special in her life. No loving partners. No dates on the horizon. She felt ready for real love, so she went in search for it online.

“When I created my dating profile, I didn’t know what I was doing,” she told us. “I only posted one picture. I had no sense of what to put up there.”

This was in the early 2000s, when online dating was still stigmatized as the last resort of the desperate, but Lisa didn’t care. She believed it was the answer to her prayers. She threw herself into a new dating arena, going on 100 first dates in two years. She recalled, “I felt in my heart of hearts that I’d know when the right man was sitting in front of me.”

The right man came into her life 30 minutes late after getting lost on his way to their first date. As he walked up, Benjamin smiled, saying, “It’s so nice to meet you,” and that was it. Lisa thought he had the kindest eyes she had ever seen. Exactly one year later, he proposed. They’ve been together more than 15 years now and could not be happier.

Inspired by her journey to love, Lisa decided to help other singles enjoy similar transformations and happily-ever-afters. In her work as a private dating and relationship coach in Los Angeles, she brings hope to singles and couples unsure how to deal with matters of the heart. She lays out the dating plans and relationship mindsets that worked for her to empower her clients to sustain fulfilling partnerships like hers.

“Benjamin is the finest human being I’ve met in my life. We have the relationship most people are looking for,” Lisa said, glowing with joy. “It was such a huge feat for me to go from my first husband to this.”

Private Consultations With a Diverse Group of Singles in LA

Decades ago, Lisa was one of the first to make a career out of dating coaching. She pioneered the niche because she saw a need in the dating community for true, passionate, and targeted advice. Trained by the Coaches Training Institute and inspired by author Don Miguel Ruiz, she takes a traditional approach to coaching, one that is grounded in a deep understanding of human nature.

You can call (323) 939-1770 to find out more and set up an in-person, phone, or Skype appointment. Lisa can only take on so many clients, so she does an initial screening after which she decides to either work with someone herself or refer them to a colleague. She’s a direct and empathetic guide for men and women willing to take her advice and do the work.

“I’m not a therapist. I don’t want to coddle or hold anybody’s hand,” she said. “Coaching is meant to be fast and results-oriented. I get people out of their stories and into their dream relationships as fast as possible.”

Lisa models the end result of her advice in her personal life and shows her clients what’s possible.

Lisa’s love story provides inspiration for many singles who want the life and relationship she has. She accepts people from all walks of life — all races, religions, and orientations — and is grateful to have such an amazingly diverse clientele trust her skills and knowledge.

Because she’s based in Los Angeles, most of Lisa’s clients are successful individuals (even some household-name celebs) ranging in age from about 28 to 42. She explains that finding love isn’t about looks, wealth, or youth — it’s about something much deeper.

“We’re all searching for love. What’s magical is that all sorts of beautiful people come to my office,” she said, “and I realize we’re all the same.”

Over the past few years, Lisa has retained her many tried-and-true coaching techniques while developing new and exciting offerings for her clients. Today, she focuses her energy on an eight-week coaching program called Emotionally Naked Dating. This intensive program provides step-by-step guidance through the trials and tribulations of the dating world. Singles can contact Lisa directly to book a spot in the upcoming program.

The daily modules include meditation videos, interviews, and information-rich material designed to show daters the power of being vulnerable from the outset of a relationship. In weekly video calls, program participants can pose questions and listen to other people’s experiences so they can learn from one another while under Lisa’s tutelage.

The dating coach tells singles to tap into their vulnerability and learn to open up to potential love matches. She encourages people to take control of their own stories by communicating their emotions — even when ghosted by someone — and inviting people in instead of pushing them away.

“People don’t communicate or ask for what they want because they’re terrified,” Lisa said. “I’m giving them a voice and a way to express themselves. That’s what Emotionally Naked Dating is all about.”

In addition to her coaching program, Lisa has started a private singles support group on Facebook. Dating Without Drama (DWD) has over 4,100 members who contribute to the community discussion about what it’s like to be single in this day and age. Members can ask questions, provide feedback, and share experiences in an open, friendly forum.

“The Facebook group helps people not to feel alone,” the dating coach said. “In the group, they can see that so many people are going through the same experiences.”

Heartfelt Testimonials Speak to the Power of Her Coaching

Over the years, Lisa has worked with people of all stripes. She’s helped couples reaffirm their bonds, singles rediscover their self-worth, and she’s even helped a Persian princess realize her vision for an ideal relationship. The woman descended from royalty said she found love with her childhood friend and thanked Lisa for giving her the clarity to see that what she wanted was right in front of her.

So many other clients have gone on similar love stories. Just in the past summer, Lisa has gone to six weddings of former clients (three of which she officiated). She loves witnessing men and women at their highest high because they often come to her feeling pretty low.

Beth F., a 47-year-old single, said she was bored with her career and frustrated with herself when she came to Lisa. Finding a loving partner seemed impossible to her. Within two years, she did a complete 180. According to Beth F., “With Lisa’s help, my life just gets better and better!”

“My coaching experience with Lisa has been transformative and life-affirming. I’m touched by her wisdom, skill, and heart.” — Marika K., one of Lisa’s clients

“Lisa is a very caring person, and her greatest passion shows when she is helping others find their partners,” wrote M.O. in another testimonial. “She is encouraging, fun-loving, and a dynamo in the area of loving relationships.”

One man recently sent a thank-you note to say he’s getting married in Maui in November. He’d first come into Lisa’s office in 2008 and said he felt she played an instrumental role in his romantic life. She helped him change his wardrobe and his mindset so he became more confident and successful in the dating scene. “If not for you, I wouldn’t be the man I am today,” he wrote to Lisa.

“I can’t even begin to tell you what it means to me,” Lisa said with tears in her eyes. “I worked with him in 2008, and he’s writing to me today because he wants me to know that I’d been a help to him… it’s just extraordinary.”

As a hands-on spiritual guide, she’s with her clients every step of the way with motivational words and actionable advice. Lisa’s coaching programs reach people on a deep emotional level and teach them to approach their relationships with authenticity, vulnerability, and hope. Ultimately, the dating and relationship coach aims to give her clients the strength and vision to live their dreams.

“I don’t know how it happens,” she said. “I just show up and give people hope. I love them, and I open up a safe space where I can show them what’s possible.