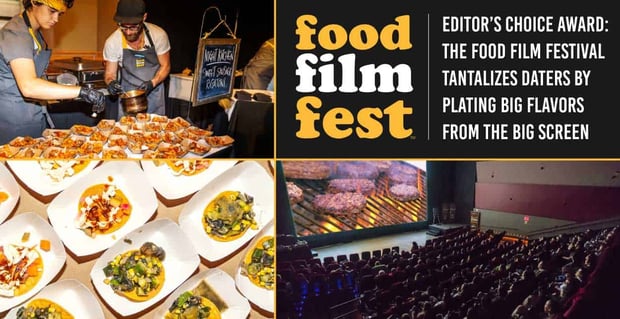 The Short Version: The Food Film Festival is a must-see and must-taste event for couples seeking a lively date activity. The three-day festival serves dishes and beverages that pair wonderfully with its original film screenings, and its multicultural menu has been pleasing palates since 2007. At The Food Film Festival, daters can enjoy a unique cinematic experience and savor the moment when food and film come together in perfect harmony.

One of my all-time favorite date nights took place just a couple weeks ago when my boyfriend and I made spaghetti and meatballs and then watched Disney’s original “Lady and the Tramp” together. We put out a checkered tablecloth and candle, and we waited for the iconic spaghetti scene before digging into our bowls of pasta.

As soon as the Italian restaurant owner started singing “Bella Notte,” my heart melted like butter. I grew up imagining what it’d be like to be a lady on a date like that, and it was fun to experience such a classic romantic moment for myself.

Couples can take their date nights to the next level by bringing on-screen moments to life, and it doesn’t take any culinary skills to make such special memories. Thanks to the creative minds at The Food Film Festival, daters can enjoy mouth-watering treats inspired by and featured on award-winning films.

The Food Film Festival has combined a love of food with a passion for film to create an event like no other. People attending an original film screening can sample some of the dishes they see on the big screen and immerse themselves in the story one bite at a time.

For the last 13 years, the festival has brought thousands of foodies together and given them the opportunity to spice up their movie nights. This memorable date activity is a crowd-pleaser, and it frequently sells out, so be sure to get your tickets as soon as they go on sale.

“The Food Film Festival has attracted a cult following from around the world,” said Executive Producer Seth Unger. “While it’s designed to celebrate food and foodways from all cultures, what has kept it growing is its ability to create meaningful and memorable moments that are fun, but also make people feel a hope or promise for the future.”

The Food Film Festival got cooking in New York City first, but now it’s ready to go international and give everyone a taste of excitement. In 2020, Tokyo will host the Food Film Festival for the first time from April 17-19. This three-day event will highlight cross-cultural dishes and bilingual films that are appropriate for Japanese and English-speaking audiences.

Food lovers from all walks of life enjoy the fun-loving spirit of The Food Film Festival. The tasteful entertainment (pun intended) can capture the imagination and give people something to talk about and savor with loved ones.

People come from all over the world to savor the sights, sounds, and tastes of The Food Film Festival, which highlights all different cultures, backgrounds, and viewpoints.

“Our guests not only appreciate the flavors we are serving them, but also the messages of inclusion, open-mindedness, and exploration that we weave into each event,” Seth said. “They like to see their heritage celebrated, but also like to experience new ones — and we offer both together.”

The Food Film Festival has offerings that can satisfy omnivores, vegetarians, vegans, pescetarians, and people with other dietary restrictions. However, the chefs cannot guarantee that foods do not come in contact with nuts, soy, and other allergens, so people with food allergies should proceed with caution.

The Food Film Festival is a one-ticket, all-inclusive event. There are no hidden fees, upcharges, or additional price points once you get your ticket. You can choose the VIP-level ticket to get an exclusive Meet, Greet, and Eat with the featured chef before the screening, but the standard ticket is enough to fill the plates and satisfy the appetites of most budget-conscious attendees.

“The reason why Food Film Fest is such a great date night is that all of our tickets are all-inclusive of screenings, food, and beverages,” Seth said “Once inside, there is not a single time when a guest has to choose whether to buy something or not. No looking cheap in front of your date!”

The Food Film Festival invites guests to “taste what they see on screen,” and that’s a pretty tantalizing idea to couples looking for a fun shared experience. Some food items are served the moment they show up on screen, while others await audience members at the After Party just outside the theater.

The Food Film Festival is the passion project of two men. Seth Unger is a third-generation event producer with a degree from Columbia University and an eye for fun. George Motz is an Emmy Award-winning filmmaker and author. When these two innovators put their heads together, they came up with The Food Film Festival and started a multisensory sensation.

“George and I set a vibe at the center that flows out throughout the organization,” Seth said. “We believe that every job is an important one and that everyone should be offered the same respect that we’d want for ourselves.”

Chefs, filmmakers, and event producers pool their talents to put on a jaw-dropping festival.

As an event producer, Seth empowers people to be creative, try new things, and give their all to their work. Sometimes The Food Film Festival can offer creative challenges, and that’s when the team really shines. The event-planning process pushes them to excel and find the fun in everyday situations.

Seth told us all the hard work is worth it when he hears the laughter and sees the smiles at every Food Film Fest. He loves it when guests tell him they’d never been to an event like his and they can’t wait to come back. Some attendees have been regulars at the festival for the last 13 years and say it keeps getting bigger and better every year.

“That’s what fuels the continued hard work to bring the Food Film Fest back every year,” he said. “We hold ourselves to a high standard. At every turn, we ask, ‘Is this something I’d like to do? What would be funny here? How can we surprise people in a fun way?'”

The Food Film Fest 2020 Worldwide Call For Entries is now open to food filmmakers around the world. You can go online to submit your food film to be part of the 14th Annual Food Film Festival in New York City, October 22-25, 2020. The deadline is April 3, 2020, for regular submissions and April 24, 2020, for last-minute submissions (which incur a higher fee).

The Festival Selection Committee will review all submissions and make its selection by July 31, 2020. The chosen films will then inspire a menu of delectable dishes and drinks for the audience’s added enjoyment.

My boyfriend and I recreated the spaghetti scene in “Lady and the Tramp” because it sounded like a cute date idea, and we had a lovely time from cooking the pasta to watching the end credits. By making food that appeared in the film, we turned an average movie night into an unforgettable shared event, and it led to a lot of laughter and cheesy comments.

It’s a powerful thing when audiences can engage with what’s on screen and feel more involved in the storyline, and that’s the type of interactive experience you can expect at The Food Film Festival.

There’s always something new cooking at The Food Film Festival, and the event producers hope to pack in a special surprise every time.

“We try to set an expectation that’s high enough to attract people and keep them coming back,” Seth said. “As an event producer, you always want to keep a few things in your back pocket — little details that will make even the most jaded guest give a little smile.”