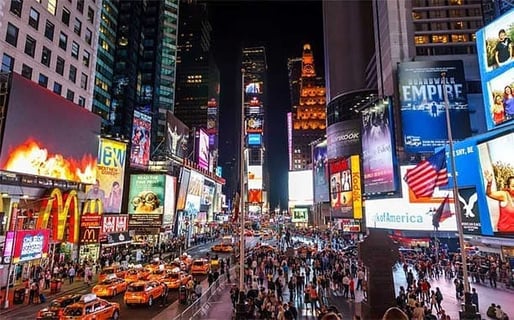 How to Meet Gay Guys in NYC

New York City is known far and wide as a gay mecca, and it certainly lives up to that reputation, making it one of the best places a gay man can live if he wants to date and meet a lot of gay guys.

Even beyond the fact that NYC is filled with a lot of gay men, it’s also filled with a lot of very high-quality gay men, and the combination of these two factors means it isn’t that hard to have an abundant, satisfying dating life as a gay man in NYC, especially compared to so many other parts of the country.

Of course, to take full advantage of the city’s gay dating scene, you need to know where to meet gay men in NYC.

Here are a few of the top places you should check out.

OK, that’s a bit of an exaggeration. To be more specific, there are tons of gay men in every neighborhood in NYC, as long as that neighborhood is remotely hip.

You probably aren’t going to want to head up to the Bronx to meet your match. There are plenty of poor neighborhoods in Brooklyn and Queens you probably won’t find a whole lot of attractive eligible gay men within.

As a general rule, know that as long as a neighborhood seems safe, cool and like somewhere you might want to visit in the course of your normal social life, you’re probably going to meet more than your share of gay men there.

“NYC is one of the places you can find

a large volume of gay bars and clubs.”

One of the reasons why there are so many gay men in NYC is the fact that gay men tend to flock to the creative sectors of the economy, and NYC is one of the country’s main hubs for creative work.

While you will find openly gay men in just about every possible social circle in the city, you will find the highest concentration within the city’s creative population.

If you are a creative individual yourself, then you don’t need to worry. Through your normal daily life you will meet all the gay men you could possibly ever want to meet.

But if you don’t work in the creative fields, you should either make friends with creative individuals who will bring you into their social circle or you should make a habit of frequenting creative-oriented events such as music shows, art gallery openings and, of course, anything theater related.

The rise of the Internet and the increased prevalence of mixed sexuality social circles have been combining to make times hard for many gay bars and clubs throughout the country.

But even though NYC’s gay scene might not be as firmly delineated as it once was, the city remains something of a bastion for sharply defined gay venues.

And not only is NYC one of the places you can find a large volume of gay bars and clubs, it remains home to some of the biggest and best gay bars and clubs in the world, including the perennial favorite Splash.

How to Meet Gay Men Online

How to Know Your Boyfriend is Cheating for Gay Men

How to Choose a Dating Site for Gay Men

How to Create a Good Relationship