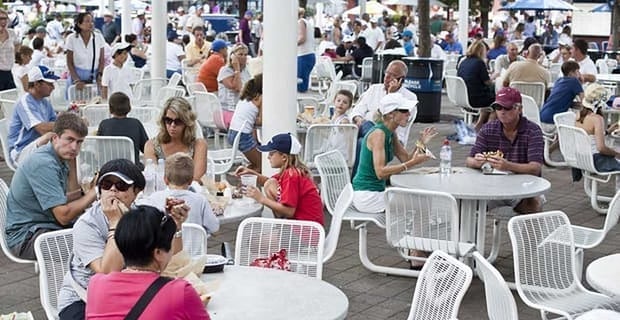 How to Pick Up Senior Singles at the Food Court

Where can you go to meet potential mature mates? One of the places that always draws a good crowd any time of year is the mall’s food court area. Keep in mind, this extends to the food areas at airports and bus and train terminals, too.

Senior people over 50 will also often take their daily exercise walk at the mall, doing what is termed as “mall walking” when the weather outside is inclimate, whether it’s rain, sleet, snow or extreme heat. And, at some point, they will migrate over to the food court area to relax, unwind and grab a beverage or bite to eat. That’s when you can meet them!

Wherever there is already a crowd means you increase your chances of meeting new people, some of whom just might be some other senior singles. This is leveraging what is known in the influence and persuasion fields as The Law of Large Numbers. Simply put for you and me, it’ just easier to meet people where there are already a lot of people!

When should you go sit in the food court?

Since you are aiming to take advantage of The Law of Large Numbers, you want to go sit when you’re expecting a crowd of people during the major meal times.

Now, you don’t have to go to the food court every day at 10:30 a.m. However, just venture over there once or twice during your week to see who shows up that early. If there are some potential mate men there, then you know you want to start taking your lunch early. Get your food at the same restaurant where they are and go sit by them!

“Being prepared with something

to say is half the battle.”

Where is a good idea to sit to invite social interaction?

Be sure to go sit in the food court open area. Look around for both crowds of people of any age who are already sitting there (and sit by them!) as well as some good empty spots. This gives you options each time you go.

Where there is already a crowd, it is so easy to break the ice with those around you. If you are companionably chatting with the folks at the table next to you in their 30s, then when someone over 50 or so sits down, it is perfectly natural to just continue the conversation flow and loop them into the light holiday banter.

Where there is plenty of seating, you can ask anyone already seated in the area, “Oh, are you saving these seats for anyone?” This gives you your conversation ice breaker. They might even think it is a silly question because it must be so obvious the seats are open. Who cares?

Being prepared with something, anything polite really, to say is half the battle when it comes to meeting people or not.

Now you know where to meet quality senior singles, as well as when to go, where to sit and how to break the ice. So tell me, where are going for lunch today?

How to Meet Single Women Over 50

How to Make the Most of a Senior Singles Event

What are You Doing New Year’s Eve?

The #1 Senior Dating Activity You Should Do This Month