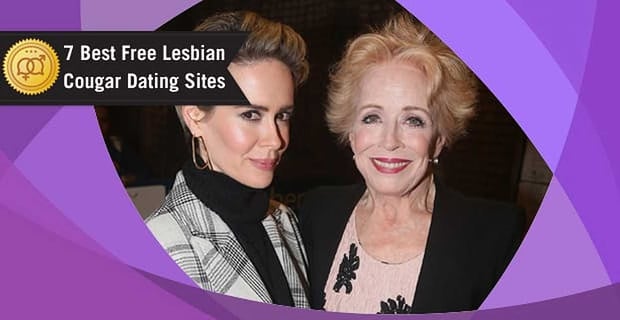 7 Best Lesbian Cougar Dating Sites (That Are Free to Try)

Actresses Sarah Paulson and Holland Taylor are one of the cutest lesbian couples ever. Just look at their tweets and interviews about each other, and you’ll see what I mean. Some people have criticized their 32-year age difference, but they couldn’t care less. To them, age really is just a number, and love is love.

Sarah once said Holland is one of the most exquisitely beautiful women she knows, and that’s just plain adorable.

If you’re looking for a lesbian cougar of your own (or if you’re a lesbian cougar), we recommend taking a spin on the following dating sites designed to facilitate age-gap dating. These sites don’t charge a cent to join and view profiles, so there’s no risk involved.

Match has tens of millions of members and more success stories than any other dating site, so while it’s not strictly a lesbian dating site or mature dating site, it’s our number one option for any singles seeking a love connection. You can filter your searches by sexual orientation and age — not to mention gender, location, education, interests, and appearance. Finding that special someone should be really easy on Match.

One of the most popular senior dating sites, OurTime is a sister property of Match, so you can rest assured that it works just as well. Another secret about OurTime is that anyone over the age of 18 is allowed to join, not just those who are 50 or older. You can take OurTime wherever you go by downloading the app via the App Store or Google Play, and then you can start viewing profiles and photos, seeing who’s checked you out, and sending and receiving flirts and emails.

BlackPeopleMeet makes the online dating process as straightforward as its name. All black and biracial lesbian singles have to do to join the site is provide their gender, the gender they’re seeking, country, zip code, username, password, birthday, and email. You can then upload a photo and write a paragraph or two about yourself and your wants.

If you’re looking for no-strings-attached relationships BeNaughty is one of the best sites to turn to. There aren’t any games you’ll have to play or facades you’ll have to put on — everyone here has the same goals. Security is another pro — BeNaughty uses SSL encryption to protect your personal and financial information, every profile is vetted by the team, and you can reach customer service 24 hours a day, seven days a week via email.

LesbianCougarDating strives to redefine “cougar-ism” to mean “ageless beauty of women.” The site describes its users as poised, experienced, independent, sensual, and practical. You have numerous features for easily and privately flirting with thousands of women. Plus, after you sign up, your profile could be displayed on the homepage for even more single lesbians to see. It’ll only take you a few minutes to get started, but don’t wait too long or you could miss out on someone truly amazing.

Founded in 2007, PinkCupid is among the most established lesbian dating sites in the industry. The site only requires you to complete three steps, and then you’ll become part of the community: 1) Create a profile. 2) Browse photos. 3) Start communicating. Nadia, one of hundreds of happy users, said: “I met my soul mate on Pink Cupid! She’s perfect for me, and she’s the most intelligent and beautiful woman I’ve ever met. We were both pretty skeptical of online dating at first, but it worked for us!”

The self-proclaimed largest cougar dating site, CougarLife has been seen on large media outlets such as USA Today, Fox News, ESPN, Playboy, and Sports Illustrated. The site’s goal is to dispel myths about age-gap dating, including that it’s just about looks and/or money. Note: CougarLife allows straight men and women and gay men to join, so make good use of those search filters.

Forget About Age & Just Listen to Your Heart

Sarah Paulson and Holland Taylor aren’t just #lesbianrelationshipgoals — they’re #relationshipgoals in general. While some people may give them weird looks or make rude comments, they know that their feelings are real — and age isn’t a factor. We say buck the rules if you’re a younger lesbian looking for an older lesbian, or vice versa, and these seven dating sites are the best place to do that.