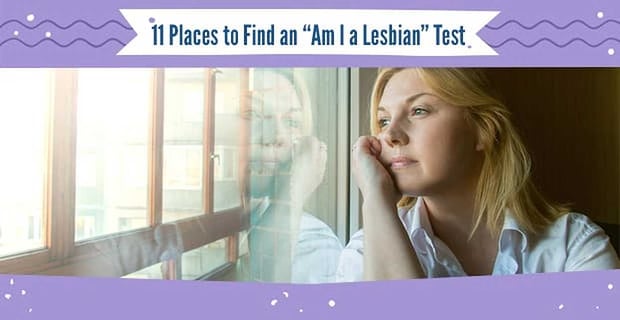 Me and my friends take Buzzfeed quizzes almost every day. I don’t know why, but it’s fun to find out who my favorite Harry Potter character is based on my favorite cheese or where I should travel to next based on my sign. But there are also quizzes out there that claim to help determine some important details about yourself, such as your sexual orientation.

We get a lot of lesbian readers asking us for places to find lesbian tests and quizzes, so we’ve compiled a list of the top 11 — all of which provide pictures. While we’d recommend taking your results with a grain of salt, these kinds of activities can be entertaining and sometimes enlightening. Ultimately, though, you’re the only one who can determine what your sexual orientation is.

The Epstein Sexual Orientation Inventory (ESOI) on MySexualOrientation.com was created by Dr. Robert Epstein, an American research psychologist who polled about 18,000 people from over 40 countries. First, you give them some basic information, like your ethnicity, gender, and age, and then you take the test. There are 18 yes-or-no questions, including “Have you ever felt sexually attracted to a member of the same sex?” and “How frequent are your same-sex sexual fantasies or dreams?” Of all the tests on this list, we’d say this one is the most serious.

PinkNews, a media outlet for lesbian, bisexual, and trans news, entertainment, and issues, has a test that’s more about finding out what type of lesbian you are vs. if you’re a lesbian in the first place. The multiple-choice questions consist of selecting your favorite drink, type of date, body part, and movie (“Pretty in Pink,” “Coach Carter,” “American Sniper,” or “The Perks of Being a Wallflower”).

PinkNews has quiz results such as Hipster Lesbian, who takes “your outfits almost as seriously as you take your lady-loving!”

The Buzzfeed lesbian quiz asks you to choose things like your favorite color, hot or cold, and up or down. It doesn’t seem very accurate, but I don’t think it’s supposed to be. One example result is “Butch/boi/Stud/Dom/AG/Tomboy,” for what it’s worth.

PsyMed is a site that focuses on providing mental health quizzes. In addition to having a lesbian one, the site also has quizzes to determine if you may have an eating disorder or narcissistic personality. For most of the questions (e.g., “Have you ever fallen in love with a female?”), you’ll answer never, rarely, sometimes, often, or very often.

One of the questions on PsyMed’s quiz is “Do you feel sexually attracted to females?”

Quiz Rocket is strictly for taking all sorts of tests — they have thousands of them. Their lesbian test, in particular, is full of sarcasm like “Who do you know who drives a pickup truck?” One of the selections to which is “THIS GUY RIGHT HERE! (I mean this girl… damn, I always do that.)”

A quiz-making website with over 100,000 quizzes created and more than 4 million quiz takers, ProProfs’quiz helps tell you if you’re lesbian, bisexual, or straight. This is a short quiz (only five questions), and it’s full of grammar mistakes and text speak. So, I wouldn’t trust this one that much.

PlayBuzz has a test that’s similar to PinkNews’ in that you’re not finding out if you’re lesbian — you’re finding out what kind of lesbian you are. The questions seem to be pretty stereotypical such as picking a type of flannel, the best “The L Word” character, and your go-to gay lady movie.

GoToQuiz is another quiz-taking site, so their lesbian expertise is questionable. I’m not sure what my favorite subject in high school has to do with my sexual orientation, but it only takes a couple of seconds to complete so there ya go.

GoToQuiz has thousands of quizzes, so it’s fun, but take their lesbian expertise lightly.

When someone says something about a lesbian couple on TV, do you blush and have a lot to say? Then you might be a lesbian, according to Quibblo. On the other hand, if you shiver and turn away (what?), you’re probably straight. If you catch my sarcasm here, then you’ll know this is a lighthearted test you can take if you’re just trying to pass the time.

Zenhex has another quiz to figure out if you’re heterosexual, homosexual, or bisexual and the site claims their results are very accurate. I think you’ll have to be the judge of that. Plus, it’s only six questions, so you don’t really have much to lose.

According to Zenhex, this is one of the most accurate lesbian tests you’ll take.

OkCupid’s “Are You a Lesbian?” test includes 15 questions such as “When you go to the beach, do you find yourself paying more attention than needed to a girl’s swimsuit?” It’s humorous and not meant to be taken seriously at all.

So, Are You a Lesbian? That’s Up to You!

We all love discovering new qualities, characteristics, and traits about ourselves, but in terms of sexuality, you’re probably better off talking with one of our experts. Remember, try not to let quizzes tell you who you’re attracted to and what kind of person you are — just enjoy them for what they are.

Should I Date Straight Girls?