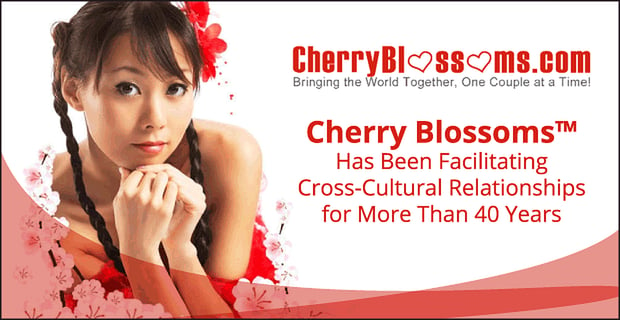 The Short Version: When Cherry Blossoms was created in 1974, it introduced Western daters to Asian singles through a catalog that included photos and descriptions. But Cherry Blossoms has since evolved. In the mid-1990s, the platform was one of the first to go digital, becoming the fourth dating company with an online presence. Throughout its evolution, though, Cherry Blossoms has remained focused on its mission: building cross-cultural romances between men in Western countries and Asian women. And over more than 40 years in business, Cherry Blossoms has helped develop more than 250,000 relationships.

Users of the online dating platform Cherry Blossoms often make connections so quickly they surprise themselves. Cherry Blossoms CEO Mike Krosky shared the story of one user who joined the platform hopeful, but who didn’t believe he would make a romantic connection as fast as he did.

After nearly 30 years of marriage, the user had recently gone through a divorce, and he wanted to find a new partner, so he joined Cherry Blossoms. While he was hesitant about the likelihood he’d find love, he was open to the possibility.

And that’s exactly what he found — in a short time.

“Three weeks after he joined the site, he’s off to the Philippines to see his fiancée,” said Mike. “He went back a few more times, they got married, and she just got to the US.”

Mike explains that many Cherry Blossoms users find love quickly — especially if they’re open to possibilities they may not have explored before. But, if users aren’t open to alternatives, they may linger on the site for years, never finding love.

Cherry Blossoms was one of the first online dating platforms for Western men and Asian women.

“Life is all about what we attract. I have clients who pay attention to their point of attraction and make sure they are available for love. If they’re open-hearted, they’re going to meet someone in six months,” Mike said.

But the user love story that Mike shared is far from the only one that Cherry Blossoms has fostered. The platform’s users are often divorced men from Western countries seeking love and marriage different from what they found in the first go-around. The women on the site are from Asian countries — including China, Thailand, and most prominently, the Philippines.

“The guys on the site are typically 40 to 60 years old and have been married before,” Mike said. “And 90% of our guys are divorced. They want a different experience than the last time.”

And that different experience is what they find. It is also why Cherry Blossoms has had its hand in 250,000 relationships and marriages over more than 40 years of operation.

Moving From Catalog-Based Dating to the Digital Age

With 50,000 current users, Cherry Blossoms is still going strong, but the platform has seen many different iterations since it was created in 1974.

Cherry Blossoms’ original two founders decided they wanted to meet women from overseas. To attract those women, they placed personal ads in Japan and the Philippines, noting their interest in love and marriage.

As the replies flooded in, the founders realized that many Western men were likely looking from romance with Asian women. After advertising in the United States and receiving plenty of responses, they started pairing these men and women.

In the early days, the company relied on catalogs to pair daters. Because of all the marriages spurred by the site, Cherry Blossoms also started helping users with fiancée and spousal paperwork for immigration.

“We’ve been doing fiancée visa support for more than 40 years,” said Mike. “It used to be a two-page application, and now it’s 13 pages. The average package we end up putting together weighs four or five pounds.”

Cherry Blossoms has fostered a quarter of a million relationships over more than 40 years in business.

The catalog-based format lasted until 1994 when Mike first learned about the company. One of his friends — who he describes as “an average-looking, 57-year-old guy” — met an attractive woman through Cherry Blossoms.

Impressed by the pair’s connection, Mike offered his technical expertise to the Hawaii-based Cherry Blossoms.

“I told them I could help them get online,” Mike said. “ I made an offer to buy the company, and my bid was accepted. I put Cherry Blossoms on the internet, and off we went from there.”

After signing up, the platform allows users to upload photos and a profile detailing the qualities they can offer a mate. Users can then search for partners using parameters they think are important, like physical appearance, education, and work history.

While Mike suggests that many Western men are interested in meeting women from other cultures, he notes that many of the websites that say they can create such relationships aren’t trustworthy.

“Some websites even send out fake messages,” Mike said.

Alternately, Cherry Blossoms users do not want to play games. The women who use Cherry Blossoms are primarily from the Philippines, and most are around 30 years old and seeking partners with whom to build their lives. Mike suggests that the focus of Filipino culture on life and love is what makes these women sign up to meet appropriate partners.

“The women are not looking for Tom Selleck or Tom Cruise,” Mike said. “They’re looking for a nice guy who’s coming home tonight from work. A good husband and a good father. They’re traditional in those ways.”

And they aren’t always looking for men their own age, as long as they’re focused on building a sincere relationship.

Other female users come from China, Thailand, and Vietnam, and they tend to be older than their Filipino counterparts.

“One thing you can say about Cherry Blossoms is we’re honest and sincere about what we’re doing,” Mike said. “We’re about love and marriage — period.”

Cherry Blossoms helps many users who may have had previous failed relationships find the long-term connections they seek — many times faster than they imagined. Often, Mike finds that users weren’t satisfied in their marriages and instead stayed together out of obligation or responsibility.

“In the United States, 37% of marriages last, but only 10% of those couples say they’re in love,” said Mike. “The reason is that people went in different directions. When they get older, they realize marriage wasn’t what they thought it would be.”

“Love is the master’s course in life, and most people never get the diploma. It’s a practice of focusing on only what you want.  Change the inside circumstances, and that will change what’s happening outside.” — Mike Krosky, CEO of Cherry Blossoms

But Cherry Blossoms offers these divorcees — and those who have never been married — opportunities to find long-lasting love. Mike believes success on the platform comes when users focus on what they want.

“Love is the master’s course in life, and most people never get the diploma,” he said. “It’s a practice of focusing on only what you want.  Change the inside circumstances, and that will change what’s happening outside.”

The platform is all about helping users find their true love. From offering daters a once-in-a-lifetime opportunity to meet one another to completing spousal visa paperwork, Mike feels Cherry Blossoms is a worthwhile endeavor because it is helping people.

And after more than four decades in the business, Cherry Blossoms remains committed to answering one question.

“How can we bring the world together, one couple at a time?” Mike said.