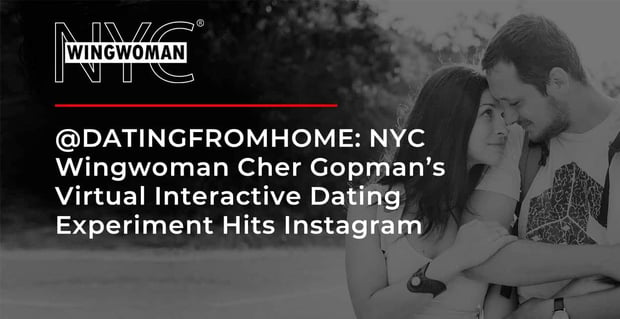 The Short Version: Matchmaker and dating coach Cher Gopman found a way to help singles keep dating while keeping their social distance. She turned to Instagram to keep pairing singles as part of her new platform Dating From Home. Singles fill out an application describing themselves and why they want to find love online. Then Cher uses her matchmaking skills to set up compatible partners on virtual dates. She posts parts of those video dates on Instagram so her community can comment, vote, and follow along to see who each single chooses.

Quick-thinking matchmaker and dating coach Cher Gopman, aka NYC Wingwoman, found a way to ensure dating doesn’t have to go on hiatus during this time of social distancing.

The idea started when New York City suddenly went on lockdown in March 2020 due to the COVID-19 pandemic. Cher’s single friend and business partner, Lauren Festberg, had her very first FaceTime date at the beginning of quarantine. Lauren was filling Cher in on how incredible the virtual date went when a realization hit them: Virtual dating is the way of the future.

The pair coined the handle @datingfromhome on Instagram within the first week of lockdown. It represents an interactive virtual dating experiment on social media designed to build a community of love at home during these hectic, and often stressful, times. Singles who want to be a part of the fun can fill out an application on the website describing themselves and why they want to find love online.

Each week, there is a lead single guy (“Homie” aka “The Bachelor”) or single girl (“Homette” aka “The Bachelorette”). Cher uses her matching making skills to interview potential compatible partners to find the two best suited for the 10-minute blind Zoom dates.

Those dates are recorded and posted to Instagram for the @DATINGFROMHOME audience to watch, comment, and vote for who they think should get the second date. The Homie or Homette will then choose who they’d like to continue to date from home — with one catch.

Cher will call the chosen contestant live on the phone to ask if they accept the second date or reject it and become the next lead single, getting set up with two new potential partners.

The @DATINGFROMHOME team includes Cher, who has appeared on VH1, Fox & Friends, Inside Edition, and whose NYC Wingwoman matchmaking service has been written been written about in countless blogs, magazines, and news articles. It also includes Co-Creator Lauren, Cher’s best friend, and a New York City single who understands how challenging the dating scene has become during the COVID-19 pandemic.

A Creative Way to Find Love During Quarantine

Jesse Montana from “Vanderpump Rules” was one of those isolated singles looking for love during the lockdown. Rather than waiting for the stay-at-home order to be lifted, Jesse decided to take matters into his own hands and sign up for the @DATINGFROMHOME experiment.

@DATINGFROMHOME has had success in both entertaining people and matching singles.

Jesse, who is an attractive, famous, single gay man, was a logical first choice. Cher asked him questions about what he was looking for in a partner and then paired him with two possible matches, Jake and Noah. The 10-minute Zoom dates were then uploaded to @DATINGFROMHOME’s Instagram for its audience to watch.

Later that night, Jesse and his dates were invited on Instagram Live to share their thoughts about the experience. And 24 hours later, viewers again tuned in to the @DATINGFROMHOME Instagram Live feed to hear Jesse’s decision. He picked Jake and according to the viewer poll, fans agreed.

Jesse and Jake continued to date from home for the weeks to follow and finally decided to have their first in-person date, socially distanced of course.

Is This the Next ‘Love Is Blind’ Meets ‘The Bachelor’?

If you are not interested in looking for love on Instagram, or you already have a partner, you can still get into the action by following @DATINGFROMHOME to watch, comment, and vote. That interactive entertainment experience was part of Cher and Lauren’s goal, as well.

Instead of binge-watching TV during quarantine, they wanted to give people the opportunity to see others find authentic happiness, in real time.

Instagram users were recently hooked on Jennifer and Chase’s story. When it came to decision time, Homette Jennifer chose Chase to ask for a second date. He turned down the offer for the chance to find love with two new singles as the next Homie. He is the only contestant so far to throw that curveball.

Comments about Chase were lively.

The following week, Homie Chase’s first date was with Kari, who prompted one Instagram user to comment, “I hear a jersey/philly accent!” His second date was with Jacqi. The audience really liked the two of them together, with one noting “How do I vote for her? She is so cute.”

After both dates, the @DATINGFROMHOME team checked in with the singles on Instagram Live to talk about compatibility. It’s surprisingly hard to gauge whether you will click with someone online, even if you like everything about their profile and the way they look in photos.

Cher talks to some past @DATINGFROMHOME singles to update fans on their relationship status.

Ultimately, Chase chose Jacqi to ask for a second date, and she accepted. Luckily, he found someone he was compatible with during quarantine and the fans got to follow along in their journey. And since it has been a while since the pair got together, @DATINGFROMHOME even caught up with Chase and Jacqi to update fans on their journey.

“The fans are so invested in the couples that we created a ‘Where Are They Now?’ segment,” said Cher and Lauren. “It’s so rewarding as a matchmaker and dating coach to see actual relationships established. Most of the couples are still ‘dating from home’, which is so exciting that what started as an experiment is leading to real love success stories.”

And, according to Cher and Lauren, there are plenty of plot twists and turns in the “Where Are They Now?” segment.

“You will not believe some of the crossover and juicy gossip, it’s like bachelor nation on steroids. Shout out to our first Homette Rachel,” said Lauren with a laugh.

If you want to participate in @DATINGFROMHOME, you’ll have a lot of competition. Forty-eight hours after launching the Instagram page and channel, Cher received 365 applications from singles who wanted her help in finding love.

Since @DATINGFROMHOME premiered, Cher and Lauren have already helped eight Homies and Homettes find a connection during quarantine. The Instagram page has also expanded in popularity, with more than 2,500 followers in just eight weeks.

“The goal of this fun, interactive experience is not only to bring love into people’s lives but also to provide entertainment to our quarantined communities during these unprecedented times,” said Cher.

@DATINGFROMHOME has plenty of potential to help singles find love during social distancing while also offering entertainment to the Instagram community.

Even reality show stars, like Jesse, are turning to @DATINGFROMHOME to help them find love.

NYC Wingwoman Cher Gopman created Dating From Home when she saw that lockdowns were making it harder to date.

“Jesse’s episode really kicked off the rest of the reality TV stars that we’ve set up. From MTV’s ‘Real World,” “Are You The One,” “The Challenge,” “Ex on The Beach,” “Temptation Island,” “Love Island,” “Big Brother,” and “The Bachelor, just to name a few. It’s crazy that I’ve watched these contestants on my favorite shows, and now they are taking a chance with us,” said Lauren.

“It’s amazing that the reality stars are turning to Instagram for a chance to date their fans in the hopes of finding love,” Cher added.

Cher is also very familiar with the reality TV scene, starring in “My Super Sweet Sixteen,” “Exiled,” and most recently, “sMothered.”

And even with the economy opening back up, Cher and Lauren don’t expect the dating scene to go back to normal anytime soon.

“I personally want to continue having every first date over FaceTime for two reasons: One, I’m not comfortable going back to a bar or restaurant anytime soon and, two, to avoid that bad-date, discouraging experience. Now I can vet the guys and form a connection before meeting in person,” said Lauren.

Cher agreed, saying, “It can be really tough to be single under these circumstances, and that’s why I decided to take my expertise to Instagram. As a dating coach and matchmaker for nearly five years, I have helped countless people successfully find love, and I’m excited to continue doing that through this new platform,” she said.

And anyone can follow@DATINGFROMHOME on Instagram to catch the weekly episodes. And those who would like the chance to get set up on a virtual date can either apply directly on www.datingfromhome.net or through the link in the @DATINGFROMHOME Instagram bio.