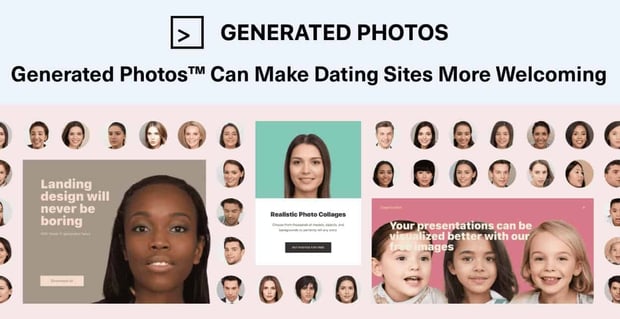 The Short Version: Generated Photos leverages Artificial Intelligence (AI) to create realistic human faces for companies, designers, and other creative purposes. Dating site entrepreneurs can use Generated Photos to design websites and landing pages that appeal to all dating demographics — without making a real person the face of their platform. The company’s AI generates realistic faces of different races, genders, weights, and ages. Generated Photos works with real-life models and uses AI to alter, render, and combine their features in ways that make them completely new faces.

Global dating site entrepreneurs are probably familiar with using stock photos to add diversity to their websites and landing pages. Those types of photos are popular because they’re an economical option to foster inclusivity and build a worldwide dating brand.

Without those stock photos, entrepreneurs would need to find a diverse group of models to become the faces of their worldwide collection of sites. But both options mean that real people are attached to your product — for better or worse.

But with Generated Photos, dating site owners can produce photos that appeal to singles who visit each country’s landing page without using stock photos or models. That’s because Generated Photos uses artificial intelligence (AI) to create faces that are hyper-realistic — but don’t belong to a real person.

Through a combination of photographs of real models and virtual technology, the company generates faces that can display a variety of emotions. Those faces can also represent different genders, ages, ethnicities, and weights, among other characteristics.

That means dating site visitors in India can see singles who look like them, as can those hailing from America or Japan. These changing landing pages can better engage singles, letting them know that the dating site has their interests in mind.

“And each time you run your page, there can be a different version of the same person. If you open it from Japan, for instance, there will be models in the same positions and with the same emotions, but they are Japanese,” said Ivan Braun, Founder of Generated Photos.

Today, Generated Photos offers more than 100,000 faces that anyone can download for free. The only requirement for use is that users link to the Generated Photos website whenever they use an image.

The Importance of Creating Faces That Aren’t Real

Ivan and his team decided to create Generated Photos after they struggled with stock photography and real models. For example, sometimes models would become the face of a company or product that they had no interest in representing. Further, stock photography can often be homogenous and unappealing to a wide range of audiences.

Before he created the company, Ivan ran a graphic design studio. One day, he needed to quickly find a model to put in a mock-up for a campaign he was designing. He asked his friend — who wasn’t a model — to pose for him so he could create his marketing materials. She was supposed to be taken out and replaced with a different photo.

But it turned out that the company never got around to taking out her face, and when the campaign launched, she was still part of the advertisement. Ivan’s friend wasn’t happy.

“There are live people behind every picture, and their lives are a factor. Even in stock photography, there are famous stories where someone becomes the face of a brand they didn’t specifically agree to be in,” Ivan said.

Often, models sign release forms to protect themselves, and companies, from those types of problems. But not everything is covered by the legal process. Even with stock photography, entrepreneurs who use the images can run into problems with distribution rights, copyright, and infringement claims.

Ivan knew that the industry needed something different. That’s why he created Generated Photos, which doesn’t use any real faces, so no one can take issue with their image being used to market a particular product. Even the models who work with the company as baseline image canvases can’t recognize themselves, as the AI distorts their features.

AI-generated photos don’t come out of thin air, and Ivan and his team had to experiment with different processes to figure out which one worked the best.

“We wanted to add some magic to stock photos, and we got some traction and got some attention from the press,” he said.

The process begins when the Generated Photos team, including a photographer, a producer, a stylist, and a post-production team, comes together to photograph real models. These models also contribute to the photo development process, something that doesn’t happen in stock photography.

“We create a technical environment for creative professionals. We want everybody to have their own ideas and help the process,” Ivan said.

The Generated Photos team includes photographers and stylists who work with real models.

Later, the eight-person software development team leverages AI to combine, alter, and render the photos so that the models aren’t recognizable — even to themselves.

“The machine that generates the faces doesn’t know anything about the people we had in the studio. But it learns what people look like based on the pictures we took in the studio,” said Ivan.

That means that the AI knows the essential characteristics of human faces, and it understands how to keep them proportional and symmetric.

If dating site owners want to use those images for their dating sites, they have plenty of options to make the photos inclusive and representative of their users. For example, they can choose the ethnicity, age, and gender — including a transgender option — of the person in the photo.

Generated Photos signals a move away from stock photography, which can be a minefield of legal and ethical issues. The company has found a wide range of clients who want to make the switch to a new kind of face.

“Some people use it for design or mock-ups. Others use it to create videos and play around with them, and they’ll find exciting uses we never thought about,” Ivan said.

One company has even asked Generated Faces to create the faces of famous historical figures for a documentary. It’s also common for clients to use the faces in simulated games. But AI-generated faces are still only in their infancy, and Generated Photos is still exploring the possibilities.

The Generated Photos API will allow users to choose the features and characteristics of faces.

Next up, Generated Photos will roll out a commercial version of its website. The photos on that version of the platform will be higher quality than many of the free images.

Generated Photos is also planning to let companies send images of their own models. Then, its AI will create a face that’s unique to the company’s mission and goals, but that doesn’t actually depict a real person.

Video is another area in which Generated Photos sees a need for AI-generated people.

“We will soon be able to create short movies and videos — and even customize the videos. You might be able to open Netflix and see yourself or your family or friends in the movies,” Ivan said.