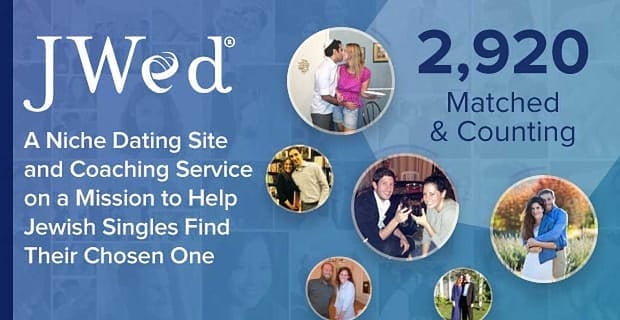 The Short Version: Since 2001, JWed has connected nearly 3,000 marriage-minded Jewish singles with their mates. This niche online dating platform’s success is due, in large part, to its carefully curated membership, innovative search and communication tools, and friendly, Jewish-focused environment. For those in need of a bit of help in the dating and relationships arena, JWed also offers coaching and profile-writing services for clients regardless of religious affiliation. At JWed, it’s all about empowering clients and members to find lasting partnerships, and the site’s thousands of success stories prove it’s doing just that.

Finding love in today’s digital-centric world can seem like a tall order for many. There are countless dating sites on the market, and just when you think you’ve finally found the right platform, the task of weeding through a sea of profiles begins.

Most online daters are looking for someone who shares a similar cultural background and belief system, and many of the general dating sites just don’t narrow down potential match results far enough to meet these needs. But Jewish singles are in luck — JWed offers an intimate meeting place for them to connect.

At this bespoke dating site, members enjoy an atmosphere where they’re sure to meet others who hold similar worldviews and traditions. JWed opened its doors for business in 2001 and has since helped couple nearly 3,000 members with compatible partners.

The site’s secret ingredient is its mission that aims to give members the tools they need to form meaningful relationships.

“We try to do everything to encourage an environment where people are looking for their soul mate and having serious conversations about compatibility,” said JWed CEO Ben Rabizadeh.

Ben told us JWed’s founding story is a unique one. The site was originally called Frumster.com, and he was one of its first users.

“I was using the site for about six months and was very happy with it,” he said. “Later on, I made the owner of the company an offer, and I went from being a user to an owner. I was just happy I found an opportunity to make it better.”

Ben’s experience on Frumster gave him firsthand insight into what it was like to be in the trenches looking for a soul mate. As a result, he was able to take a good platform for Jewish singles and make it great.

“I wanted to create a small, niche service,” he said. “A Jewish dating site with a focus on marriage-minded people.”

Don’t let JWed’s niche status fool you into thinking it’s small. The site has a diverse reach with a high-level of activity. Ben told us the site is currently home to roughly 10,000 active users aged 18 to 70 and split equally between genders.

“Demographically, we now welcome all Jews of any background — as long as they are marriage-minded,” he said. “Although 65% of members are Orthodox, the site boasts a firewall, which provides a comfortable experience for all and prevents the most religious and the least religious from ever seeing each other as we have found that matches are impossible to create between these two groups. We do, however, have a cross-over where we encourage searches between traditional or conservative Jews with Modern Orthodox Jews. ”

JWed isn’t the first niche dating site created for Jewish singles. However, it prides itself on being only for the marriage-minded. Ben and his team have no interest in being associated with hookups and one-night stands; instead, they ensure every feature of the site promotes its goals of getting more Jewish singles the walk down the aisle they deserve.

“When a person joins, they’re not on the site right away,” he said. “A person goes through their profile, and we make sure they are eligible to join our site — they must be Jewish and looking for a serious relationship. There’s a lot of fraud out there, so we’re very big on screening. We like to attract people who are here for the right reasons.”

Since its inception, JWed has helped match nearly 3,000 Jewish couples.

Protecting members from fraudsters and those who may have less-than-committed intentions is just one way JWed stays true to its mission. Ben pointed out that the site’s features work to encourage thought-provoking, introspective, and fulfilling connections.

“We do try to massage the features a little to make them a little more serious-minded,” he said. “For instance, another site has a very casual initial messaging tool branded as Flirt that sends pre-written messages. We’ve branded ours as Icebreakers where messages are written to encourage more serious conversations.”

These small, but meaningful, adaptations promote the kind of environment that makes connecting on a deeper level possible, Ben said. That means less time talking about the latest Netflix series and more time discovering if you have genuine compatibility.

Professional Coaching That Helps Clients Attract and Keep a Partner

Relationships aren’t easy, and the team at JWed understands that, sometimes, people need a little assistance. As a result, JWed developed a coaching program to help all people — regardless of religious affiliation — obtain healthy, fulfilling relationships.

“We work with professional dating coaches and profile writers who help people with their dating experience,” Ben said. “What’s great about this service is you can choose your dating coach based on your situation. However, the best part about this is you don’t have to be a JWed customer to use it; you don’t have to be single or Jewish. Basically, anyone can use this service. We even offer couples and marriage coaching.”

JWed coaches are available to chat remotely with clients to help them navigate relationships.

Ben and his team have been hard at work testing the new service for the past year to ensure it meets JWed’s quality standard.

“We’ve thoroughly vetted our coaches, and the profile writing is only $49, which can be used for writing any profile, including career profiles,” he said.

It’s both beneficial and affordable and caters to every part of your life, not just dating.

There are several coaching and combo packages from which to choose, and there’s something for every client type — from those looking for basic dating advice to those who may need a lot of hand-holding to attract and keep the kind of quality partner they are looking for. JWed also offers JWed-specific and general coaching services to help clients reach their relationship goals.

JWed Works! Stories from Couples Who Found Their Soul Mates

Since its launch 15 years ago, JWed has been the springboard for nearly 3,000 reported engagements. An extensive success stories page is dedicated to relaying the heartwarming stories of couples who met on the site.

At their first rather nontraditional date, Betty sat in Brad’s car drinking smoothies during Sukkot. Since they couldn’t find a café with a sukkah, Brad improvised his own plan. He reached into his backseat and brought out the aravos and hadassim he had brought with him. This gesture stayed with Betty, and a week later she revealed that she couldn’t forget the way he had delicately and respectfully unwrapped the aravos and hadassim. He, in turn, was touched that she had noticed.

Soon the pair committed to a long-distance relationship. They traveled to see each other and their families often. Months later, Brad moved with his five children to be with Betty and her four children. They were later married in a magical, intimate ceremony with their nine kids, friends, and family cheering them on.

Thousands of couples like Betty and Brad have found love thanks to JWed, and Ben couldn’t be prouder.

“When I know that I helped people get married, it’s amazing,” he said.