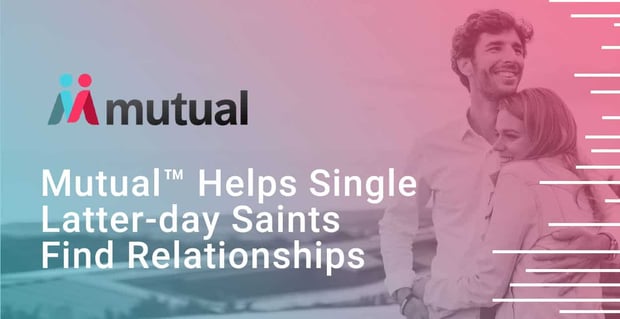 The Short Version: It’s not always easy for singles to find someone who shares the values of the Church of Jesus Christ of Latter-day Saints unless they live in the heart of Utah. Mutual is a popular dating app designed to connect singles for long-term relationships no matter where they live. Many single Latter-day Saints are looking for the love of their life and want to find faith-driven partners. Mutual understands the importance of religious compatibility and caters to members who are ready to get married and start a family.

Sometimes finding love can feel like a tall task. Whether it’s online or in person, singles must find common ground and compatibility in key areas of their lives to have a chance at a long-term relationship.

That is especially true for members of The Church of Jesus Christ of Latter-day Saint, who are searching for partners who share their faith.

Mutual is a dating app that aims to make those connections a little easier for single Latter-day Saints worldwide.

One couple who met through Mutual, Paula and Nathan, spent years waiting for the Lord to help them find each other. Paula was visiting the United States from Rio, Brazil, and decided to extend her visa for a while. Nathan lived in Salt Lake City and attended Brigham Young University.

Mutual connects singles no matter where they are in the world.

Both of them had been members of Mutual for a while, and they’d been on a few dates. But nothing felt perfect yet.

“I always hated the American dating culture, it was really different for me, and sometimes I really didn’t know what to do or expect,” Paula said in a blog post on Mutual’s website.

In fact, she even stopped using Mutual for a while. But she said signs from God began to appear, including a message on social media encouraging her to give love another try. That’s when she decided to sign up for the full Mutual experience, including its premium features.

One afternoon, she was scrolling through the app when she noticed that Nathan had liked her profile. His profile had never popped up for her before, but when she saw it, she liked it. The day they matched happened to be Nathan’s birthday. They started chatting and went on their first date two weeks after that.

Mutual helps single Latter-day Saints like Paula and Nathan find each other no matter where they are. Many church members live in small communities, so finding a compatible match may not be easy — especially outside of Utah.

“Within our faith it’s easy to find people to date in Utah, where we share a lot of the same beliefs and values, but outside Utah, that’s not the case,” said Cooper Boice, Co-Founder of Mutual. “I wished a dating app existed for the members of my church. I couldn’t find anything out there, so I built a team that created Mutual.”

That’s why Mutual opens up a vast array of possibilities and connects like-minded singles through their faith for long-lasting relationships.

The Founders Saw the Need for the Dating App

Cooper said he started the app because of his own experience with dating. He attended Brigham Young University, just like Nathan, and had a blast going on dates with other Latter-day Saints. But when he moved to Arizona, he realized how much more difficult it was to find people to date who shared the same faith.

Cooper said he didn’t know anything about creating an app. But it was clear that there was a need for a dating app focused on Latter-day Saints, so he and his team launched Mutual in 2015.

Paula and Nathan connected on the Mutual app and eventually got married.

The entire team works remotely, and they have even before COVID-19 protocols made it more common. It’s a fun, young team of developers, marketing professionals, and creative types. Whenever there’s a significant update to the app, the team throws a Zoom party, ordering food for everyone and playing games together online.

“As far as people, they say to surround yourself with those who are smarter than you. I’m taking that to heart. Everyone working on the app is a lot smarter than me,” Cooper said with a laugh.

The team includes fellow Co-Founder Bob Carroll, who previously worked for the University of Phoenix and helped assemble the talented team of developers. Michael Patterson, who built the first version of the app, was in college when he joined the Mutual team.

The number of Mutual users has grown significantly in the last year, due in part to the COVID-19 pandemic not allowing people to meet in person as much, Cooper said.

The number of swipes has doubled, and 15% more people sign up every day. Mutual matches have increased by 23%, and the total number of monthly active users has increased by 26%.

Love is a Main Goal Among Users

Mutual has nearly 30 team members, and some of them have found their partners through the dating app — which is available on iOS and Android.

App users are fairly evenly split between men and women, with half of users between 18 and 24 years old. They tend to skew younger, and the majority live in the United States, with most of the remainder located in Canada, Mexico, and Brazil.

The free version of the app follows a standard concept, so it’s easy to use right away. User photos and information are presented on one screen by design, making it easy to scroll through and find someone interesting. It’s also possible for singles to add details on where they’ve been on church missions, which often makes for great ice-breaking conversations.

The premium version offers eight more features that make the user experience more comprehensive. Premium members get Unlimited Double Takes, which removes the limit on the number of times singles can undo a swipe.

Another premium feature is ninja mode, which lets people hide their profiles. Users don’t see ads in premium mode, and there’s even a height filter for people who are only interested in dating someone of a particular height.

Read receipts are also a new and popular option on the Mutual app. Paula, of course, benefited from being able to see who liked her, which is another premium benefit. Some people also decide to upgrade so they can create an expanded profile.

Mutual is Adding More Features to Better Serve Its Audience

Cooper said it’s deeply rewarding to hear feedback from couples who found love and started families thanks to the app. Nathan and Paula, by the way, are expecting their first baby.

“It’s more than a job for me,” Cooper said. “Having a purpose in life is one of the most important things you can have, and this gives me a lot of purpose and fulfillment. We’re actually having an impact on people’s lives. Multiple people reach out to us every day who are married and have kids who never would have met if it wasn’t for Mutual.”

The team shares success stories each week when they meet to talk about updates. One new feature that is in the works is called Mutual Dates. The company has teamed up with popular date spots around Utah, where a majority of the app’s users live.

Mutual Dates is a way to find date ideas, and Mutual users even get discounts and deals when they book their date through the app.

“You can find a date, and now you can plan a date through the app as well,” he said.

The team is working on another project, and Cooper plans to reveal the details soon.