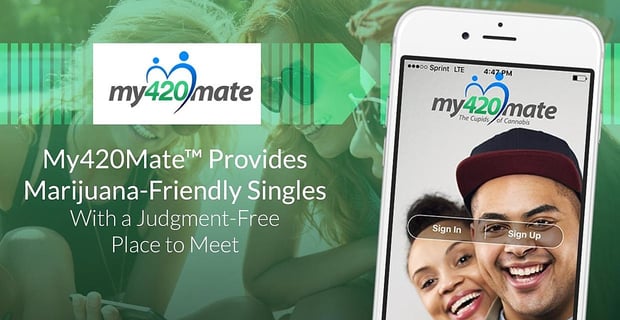 The Short Version: As more states legalize marijuana — both for medical and recreational use — the general attitude surrounding cannabis is changing. Still, it can be tricky to navigate the topic when searching for romantic partners. Marijuana enthusiasts can log on to My420Mate.com if they’re looking for someone who shares their interest in the plant or the culture. Through the website or app, users can connect with compatible singles in a welcoming environment.

According to a national survey, nearly a quarter of Americans regularly use cannabis, with 35 million people reporting using it at least once a month. The total number of people who say they enjoy using marijuana — either medicinally or recreationally — is around 55 million, which is close to the number who say they smoke cigarettes (59 million).

Still, cannabis use can be an awkward topic of conversation between people on a first date. If one person uses marijuana regularly, and the other isn’t comfortable with it, the pair may not be compatible in the long term. It’s not always necessary for both people to partake, but it can be helpful if both are at least comfortable with marijuana use.

Since the plant is still illegal in the U.S. on a federal level, and also illegal in many states, it can be a touchy subject to bring up on a date. But it’s not if you create a profile on My420Mate.com.

While the origin of the expression 420 is disputed, the term is well-known among the cannabis community as a reference to smoking marijuana, and My420Mate is focused on connecting the millions of people in the U.S. — and beyond — for whom marijuana use is both normal and acceptable.

“We have members in all 50 states and in more than 80 countries — 250,000 members worldwide at the moment,” said My420Mate Co-Founder Justin Lindberg. “We get new members every day, people from all walks of life and all ages. It’s been interesting to see all the different genres of people who are using our app.”

The inspiration for the platform came from Co-Founder Miguel Lozano’s years of experience within the cannabis culture.

“I realized that even with other niche dating sites, there was still a void for those who enjoyed marijuana,” he said. “I came up with the idea, talked to Justin about it, and we launched the site on April 20, 2014 — or 4/20.”

A Free Platform With Premium Features — Including Cryptocurrency

Despite the growth in membership the platform has seen over the years, My420Mate remains free to use. You can log onto the desktop version of the site or download the app for iOS or Android.

“Everything is 100% free: free to join, free to use, on iOS, Android, and on desktop. That’s something we’re really excited about,” Justin said. “We’re working on some new paid features, but It will always be free to join. We will soon offer additional features that people can pay to unlock if they choose to.”

My420Mate caters to those who use cannabis — for medical or recreational purposes.

For example, the app will soon integrate with the blockchain to offer user credits. The cryptocurrency is called Cangea and was developed specifically for the cannabis industry.

“We reward users with blockchain tokens they can use to unlock other various features on our site,” he said. “For instance, if you create content that gets a lot of action and engagement, you may earn tokens. And you can use them to unlock other features. You can even use them to put yourself on our hot list. Those are things we’re implementing.”

Creating a profile to use on the app or desktop site is intuitive and straightforward. When users register, they are asked to input basic information, including location, age, and dating preferences.

Users will also be asked to answer questions about their cannabis use — since every type of user is different. The app asks whether you use the plant for recreational or medical purposes, how often you consume it, and what type of cannabis you prefer. The answers offer a window into your lifestyle and can help narrow your list of compatible dates.

The company has found success in hosting live singles events throughout California — and they’ve been popular. My420Mate plans to host more events in California in 2019 and throughout the country — including cannabis hot spots like Denver, Seattle, and Nevada.

“As time goes on, we’ll reach out to other cities and put them on our schedule. The ones we’ve had so far have been different,” Miguel said. “We did speed dating for one event, an evening event with a cannabis-infused dinner menu, and even a movie night. Next up, we’re planning bowling, miniature golf, and other events that will bring people together for some no-pressure fun.”

The events average between 100 and 125 people, with the participant demographic split about 60% men to 40% women.

The demand for those in-person meeting events is increasing, but online dating is still one of the most popular ways for people to find romantic partners — and even friends.

“We have been steadily making upgrades on the technology side, and we’re happy with what we’ve accomplished,” Justin said. “We see a lot of engagement of the site, and we see many people connecting and hooking up. And we’re aware of at least one marriage.”

That result is astounding for a core team of just six people — two developers and a few folks working on marketing. Justin describes the team culture as laid-back.

“We’re all start-up guys, visionaries, and entrepreneurs. We’re constantly thinking up new ideas to add more value to the industry and for our users,” he said.

My420Mate is Reducing the Stigma & Fostering Relationships Among Cannabis Lovers

Both Miguel and Justin said they enjoy being at the crossroads of the dating industry and the marijuana culture — which has exploded as more states legalize both medicinal and recreational cannabis use each voting cycle. And those who underestimate the number of people who enjoy using the plant should think again.

“Marijuana is an industry that generates billions of dollars. The stigma is evaporating, but there are still those who perceive it in a certain negative way,” Justin said. “It’s not just about finding people to smoke a joint with; it’s about finding people open to the whole concept of cannabis — the legalization and the benefits.”

Miguel’s passion for bringing people together is shared by the entire My420Mate team. And the team is working not only to connect people who enjoy the positive benefits of cannabis but also to help make its usage more mainstream.

“People like to have fun, they want to meet people, and they want to socialize. It’s not just about meeting someone from behind the keyboard,” Justin said. “We want to give people the ease to meet digitally, but the goal is to bring people together for real-life relationships.”

My420Mate accomplishes that goal by offering digital options — its website and app — and real-world events where cannabis enthusiasts can meet face to face.