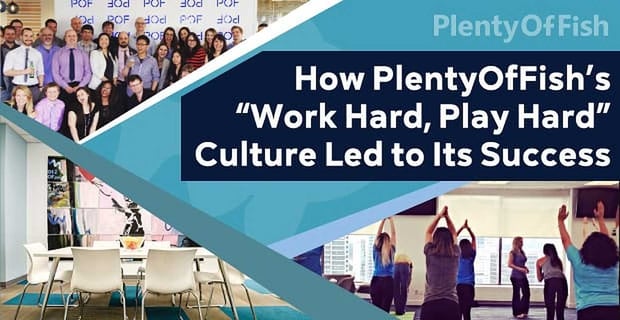 The Short Version: Whether it’s hosting quarterly hack-a-thons, taking company ski retreats, building intuitive features, or holding in-office happy hours, the folks at PlentyofFish.com have found the perfect balance between working hard and playing hard — and it’s paid off. Since its 2003 launch, this Vancouver-based company has gone from being a one-person start-up and a new name in the dating industry to a team of 75 creative people and one of the most successful sites of its kind.

It would be great to have a career where you could create innovative products that have a real impact on people’s lives, learn something new on a daily basis, and even go bobsledding with co-workers who’re like your best friends.

PlentyOfFish’s “work hard, play hard” culture has made it one of the top dating sites in the world.

At PlentyOfFish, that’s exactly what the team gets to do.

Founded in 2003 and fearlessly led by Internet entrepreneur Markus Frind, POF has always had a hardworking attitude, commitment to its members, and one-of-a-kind company culture. And all of that has cemented the site as one of the best and largest in the dating space — with 100 million registered users and 50,000 new singles joining every day.

To get some exclusive insights and personal stories about life at PlentyOfFish, we spoke with three veteran employees from three different departments — PR Manager Shannon Smith, VP of Revenue Optimization Kim Kaplan, and Director of Engineering Chris Simpson.

From marketing to business to tech to HR, the departments at POF are just as different as the people. Shannon (who started as a customer service rep in 2010 and quickly moved up to PR manager) said while there’s not an average type of PlentyOfFish employee, the main things they have in common are their welcoming personalities and drive to always get better at what they do.

“It’s a whole mix of different people, and it’s interesting to see how well everyone gets along,” she said.

No matter who you talk to, whether they’ve been there for 10 years or 10 days, it’s the knowledge employees gain from interacting with so many unique people that’s the hidden gem of the company.

“There are things you just know because you’ve been around or because you’ve tried it or you remember a conversation — you can’t teach that,” said Kim, VP of Revenue Optimization.

And perhaps that’s what Kim has enjoyed the most — learning from the variety of people who’ve come aboard.

“Working with Markus and everyone over the last several years has been one of the most amazing experiences,” she said.

The Optimization Folks Interpret Member Behavior to Improve Their Processes

Kim, who’s been with the company for over seven years, met Markus through mutual friends and joined the POF team when there were only two or three people on staff.

In terms of day-to-day life, Kim and her team are the go-tos for looking at data, analyzing trends, and then figuring out what’s causing shifts in user behavior. A big component of their job is A/B testing — comparing details like page layouts, content, and features to see what’s performing better and where there’s room for improvement.

“That’s been our focus in the last two years — split testing product changes and scaling that out, but historically we watch our numbers and ensure that we’re constantly moving in a positive direction for our core metrics. That’s been a key to our success,” she said.

Developers Use Their Unique Expertise to Make the Site Functional & Instinctive

On the technical side of things, Director of Engineering Chris came on five years ago and has played a significant role in growing the site’s smartphone apps and expanding that particular team to 45 strong. They all have their own specialties (e.g., iPhone vs. Android expertise) and use those talents to make a positive impact on the user experience every day.

“I try to keep a hands-on approach. My day generally consists of working with people and helping them develop features without causing some major drop in our revenue numbers or change for our users,” he said.

One of the techy activities the whole company gets involved in that’s outside the box for some of them — yet contributes a lot to the company growth — is the quarterly hack-a-thon. For two days employees, whether they’re tech-savvy or not, are encouraged to build prototypes of features and tools they’ve been wanting to implement on the site.

“Quite often those projects go directly into production or they’re the inspiration for future features, and that lets people enjoy creativity and try something out that they haven’t tried before,” Chris said. “That’s a really important aspect that keeps our culture friendly and creative.”

The typical 9-5, cubicle work environment is slowly dying out — being replaced by one that boosts productivity, encourages co-workers to get to know each other, and leads to happier people. And this is another facet PlentyOfFish excels at.

The unbeatable company culture at POF is directly reflected in the office setup — a huge open plan where everyone shuffles their seats around every couple of months in order to spark creativity and work with various departments.

There are several conference rooms — all with breathtaking views of the Pacific Ocean and mountains that surround Vancouver — for larger meetings. There’s also the Aquarium area, which is a community space with bean bags for people working on their laptops and all-hands meetings for discussing company goals and industry events.

Not to mention there’s a fully stocked drink and snack bar as well as 4 p.m. happy hours every Friday — which allow employees to talk about what projects they’re working on, weekend plans, or anything else that fosters relationships.

Kim added that this kind of setting is especially nice for staffers who are new to Vancouver and haven’t built up a solid circle of friends yet.

To get employees out of the office and relating to each other in other ways besides work, PlentyOfFish holds at least two company retreats a year, with activities like ziplining, wine tasting, and scavenger hunts. The most recent one was held at Whistler Mountain, where employees spent two days skiing, eating and drinking, and playing team-building games.

And while these events can get “notoriously rowdy” and competitive, the camaraderie among everyone during these weekends together is an important factor to building strong and trustworthy relationships both in and out of the office.

PlentyOfFish holds annual retreats for staffers to get to know each other better.

“I got clotheslined by one of our co-workers one time. You kind of sabotage each other but in a fun, playful way,” Kim joked. “I can’t tell you what a difference it makes to have that quality time with your colleagues outside of that day-to-day work situation.”

Chris went on to say that they consider each other a family, even as the company continues to grow, which has created a communicative environment that’s informal yet professional.

“We don’t have a lot of rules. We don’t have set times to come in and leave the office, and nobody wears a suit. And we like it that way,” he said. “Everybody is encouraged to ask questions. Ideas can come from any corner of the company. That’s the part I really cherish and want to maintain.”

At any company, you’re often going to be faced with challenges, and with the POF team having those tight-knit bonds, they’re able to quickly and easily adapt to any situation and overcome obstacles together.

The POF team is fun and relatable, which transfers over to the site’s brand.

“I think it’s really important that you share bonds so that you can navigate and overcome any obstacle as a team instead of individually,” Kim said. “You can have frank conversations and, at the end of the day, share your views with one another.”

From Chris’ perspective, it means everyone, especially his fellow techies, can change directions if need be without missing a beat.

“If someone’s been working hard on a particular feature and we decide to move on to something else, if everybody’s on the same team and you’re communicating, that’s OK. We’re able to react well,” he said. “No one’s very protective about what they do and their work, so there are no secrets and it means we can move quickly and adapt quickly.”

A People-Centered Focus Leads to Major Milestones for Everyone

While many people have a self-serving outlook at their workplace, at PlentyOfFish a victory for one person or one department is a victory for the entire company. Shannon, Kim, and Chris were even kind enough to share some of their favorite accomplishments.

“It’s great to work for a site that affects the world we live in so much. You don’t always get to see the effects your work has on people, so being able to see this couple celebrate and knowing that we brought them together was really special,” she said.

Reaching the 100 million registered member mark and launching the site’s now-leading smartphone apps are two moments that will go down in PlentyOfFish history for Kim.

“It’s great to work for a site that affects the world we live in so much,” Shannon said.

“We became one of the first in the dating industry to develop mobile apps as well as step up our game and become one of the top apps in the App Store for dating. That was the unknown and we successfully navigated that,” she said.

Chris is especially proud of some of the things people don’t see that often, like employees holding themselves accountable for their duties every day — learning what works and what doesn’t and applying that to future projects (for the development team in particular, there are TVs that stream the site live and show real-time metrics).

“We can get on a problem as soon it occurs, and we can deal with it and predict issues in certain areas and make sure we’re ahead of the game,” he said.

With its modern features and tools, devotion to its members, and friendly spirit, PlentyOfFish is doing big things for singles and the dating industry in general. And it’s great to see the people behind the site are just as fun and down-to-earth as we expected. We’ve featured just a few of their stories here, but POF has so many more memories to share and create, and we can’t wait to hear them.