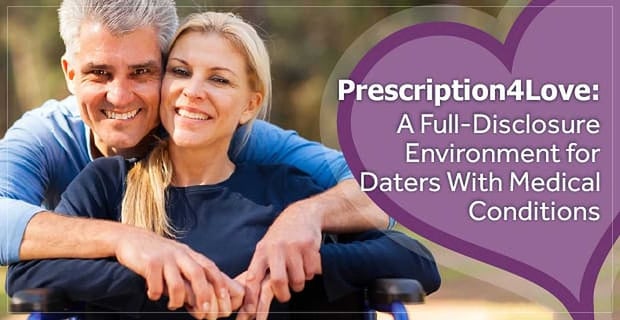 Prescription4Love: A Full-Disclosure Environment for Daters With Medical Conditions

The Short Version: The world of dating is full of challenges, but it can be particularly tricky if you suffer from a medical condition and are trying to determine when to reveal it to your date. For many, “the talk” usually ends with a one-way ticket to splitsville. Prescription4Love aims to take some of the awkwardness and heartache out of dating while living with a disability or illness by putting it all out there, upfront. Members of the site disclose their conditions openly and honestly, posted right on their profiles. Users can then search for potential partners based not just on the usual metrics of age and sexual preference — but mental or physical conditions they may have or be open to dating. The site has also evolved into more than a dating aid, building a network where its thousands of users can find support and understanding.

First dates are awkward for everyone, but they can be especially difficult for those suffering from uncomfortable or debilitating medical conditions. This was certainly true for Keith Durham, the brother of Prescription4Love Founder Ricky Durham, who suffered from Crohn’s disease — a chronic inflammation of the gastrointestinal tract.

Ricky Durham founded Prescription4Love to help people like his brother, who lived with Crohn’s disease.

It was sympathy for his brother’s plight that initially inspired Ricky to create the niche dating site, which caters to those suffering from mental and physical disorders that make it hard to find dates in the traditional ways. “It’s hard to relate,” Ricky said, speaking of his brother Keith’s dating woe. “He could meet people left and right. But he couldn’t find anybody that was going through the same thing he was going through.”

For many years, Keith lived with the severe limitations that come with Crohn’s disease, experiencing extreme weight loss and rarely going out. “No matter where he went, he had to be close to a bathroom,” Ricky revealed. “Most of the time, he didn’t want to go anywhere.”

Eventually, Keith received a colostomy bag that gave him back some freedom, allowing him to go out and have a life without being tied to the restroom, but the bag came with its own set of problems. “When do you tell someone you have one?” posed Ricky. “The first date? The third?”

The struggle with what — and when — to tell a potential date is one that many with similar conditions face in the dating world. Many times, the disclosure of a chronic or debilitating illness is an ice bath for the dating ardor, and even relationships that have been strong for months or years can be challenged by a medical condition. The beauty of sites like Prescription4Love is that it’s all out there at the beginning, skipping right over the awkward reveal to the excitement and butterflies of a new relationship.

Honest From the Start — Users Declare Their Conditions at Sign-up

As with other dating websites, the sign-up page for Prescription4Love has all of the questions you’d expect to see, including things like your educational background, favorite movies, and if you want children. However, this dating site doesn’t stop there. Members of Prescription4Love openly disclose their mental and physical conditions right there on their profiles, meaning potential matches have all the facts upfront.

Signing up for Prescription4Love includes disclosing your medical conditions upfront.

There are more than 40 options listed on the sign-up page, ranging from behavioral and psychiatric conditions like autism or Tourette’s, to physical conditions including IBS, MS, and quadriplegia. Users can select as many options as apply, and Ricky says he has seen many users with two, three, or even four different conditions. There is also an “Other” option for members with more uncommon ailments. Ricky monitors the inputs and regularly adds new conditions to the list of options.

The site’s search feature also allows members to search for friends and dates not just by location or sexual preference, but by the conditions they have. Prescription4Love has made it easy for users with the same or similar illnesses to make a connection.

Once signed up, members have access to many of the traditional dating site features, such as uploading pictures to a private or public gallery, and the ability to save favorite users. The site has also developed an internal messaging system that allows users to send and receive emails or take part in private chats. Having trouble breaking the ice? Send your potential match a virtual gift, such as a digital flower or illustrated cup of coffee.

Members Can Share Stories and Inspiration With Unique Features

While Prescription4Love makes it easy to find potential romantic partners, the site is not limited to users looking for love. Prescription4Love aims to go beyond the simple dating site by providing information and support to all of its members.

If you don’t know much about a certain illness, the Conditions page links to information on featured conditions, allowing users to become better informed about their illness or that of a potential partner. Links along the bottom of the page also offer a variety of tips on specific issues, such as places to take a recovering alcoholic or how to find a support group.

Members share their stories through Prescription4Love’s Journey for Peace journal.

Ricky is especially proud of one of the newer features, a journal called Journey for Peace, where members are encouraged to share their personal stories. Here, other users can find inspiration from those who have learned to live full lives despite their conditions. As one user writes, “I may have illnesses, but that’s not what I am.”

Additionally, each member has the option to post in a personal blog, which can be shared with any user he or she adds as a “Friend.” These blogs have turned into a support system for many of the site’s users, and members have been known to maintain accounts even after finding love, just for the friendship and community Prescription4Love has developed.

A Community of Support That Honors a Brother’s Memory

Regardless of your condition, Prescription4Love can help you find someone who knows what it’s like. The membership of Prescription4Love continues to grow every year, and the site is now home to nearly 15,000 people looking for love and understanding.

Ricky is responding to the growth by working a site-wide upgrade, which he hopes to roll out soon. Whatever the look, Ricky’s determined to maintain the open, supportive environment he always envisioned for his brother.

Although Keith, who passed away in 2004, was never able to experience his brother’s creation, he was wholeheartedly supportive of the idea during its development. Had he been able to see it come to life, it’s likely he would have echoed the gratitude his brother has received from dozens of members for whom Prescription4Love is more than a dating site, but rather a strong community. That’s true for people like Stella, who summed up what the website means to its users: “I really need someone to talk to. Thank you for this website.”