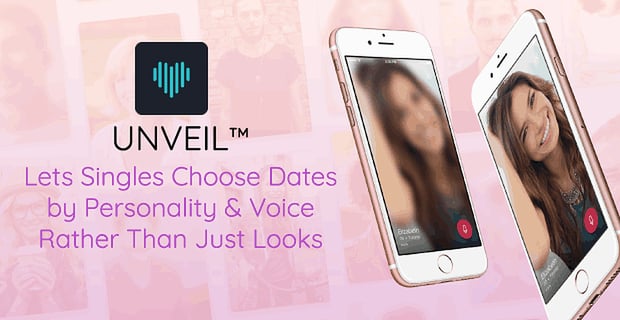 The Short Version: Online daters understand that their first impression — and often their decision to connect with someone — has almost everything to do with that person’s profile picture. If they aren’t attractive, it may not matter how much you have in common; there’s a good chance you’ll overlook them. But the innovative Unveil voice dating app turns this premise around and emphasizes compatibility, not just looks. Users can only “unveil” photos by trading multiple voice messages with other interested users. By encouraging conversation, Unveil makes dating less superficial and unearths deeper connections.

When I visit online dating sites, I often decide whether I want to connect with someone based on his picture. Most sites make it all too easy to judge people based on their photo, as that’s the most prominent piece of information presented to users.

Your bio may say that you’ve won the Nobel Peace Prize and enjoy buying women expensive bottles of both perfume and champagne, but if you’re not handsome, I’m probably not clicking.

Perhaps I should be looking for a guy who will make me laugh, think, and grow as a person, and I want that so much more than I want a handsome guy with whom I have nothing in common. Yet most dating apps make it easy for me to judge a match based on my first impression of his looks.

Of course, that means I’m wrong all the time. I connect with guys and accept dates only to find out they’re unable to hold a conversation, are incredibly boring, or, worst of all, don’t look anything like their picture. My shallow, picture-centric decisions often fail.

But one dating platform is looking to flip the script on those snap, superficial judgments. Unveil is a unique app that forces singles to exchange voice messages before they can see what the other person looks like. Unveil has become one of the hottest dating apps in the US, Canada, and the UK, because its design puts personality and conversational skills before looks.

“We wanted to design something with a bit more honesty built in,” said Geri McFadden, the Co-CEO of Unveil. “The voice messages make you unique, and the image is blurred, so the focus is more on the personality. By being anonymous, you can be yourself. You can really go for it.”

Dating Industry Experience Led to the Creation of a Unique App

Geri has been working in the dating industry for more than eight years and started out by coordinating speed dating and dinner dating events. When she met her business partner, the online dating world was starting to gain popularity. The two began brainstorming how to create a new way of dating, and an idea arose from what they had heard from the face-to-face dating sessions.

“Through the events, a lot of the feedback was, ‘I didn’t think he was my type, but, once I started chatting with him, I found out we had so much in common,'” she said. “So people like talking to people. That was the idea. We wanted to get people talking.”

“It isn’t always about true love. It’s about being more social. That’s how it evolved to the dating app we have now, Unveil.” — Geri McFadden, the Co-CEO of Unveil

Geri’s personal inspiration was her sister, who struggled for years to find good guys worthy of dating for years. She discovered that her sister — and others — enjoyed getting out and talking to people.

“I love meeting and helping people,” she said. “Sometimes they want to get out and meet people; it isn’t always about true love. It’s about being more social. That’s how it evolved to the dating app we have now, Unveil.”

Thousands of Singles From North America & the UK

Most Unveil users hail from America, Canada, the UK, and a handful of other countries. There are slightly more men than women who have signed up, and they all range in age from about 25 to 45.

Unveil’s Instagram page speaks to the app’s widespread popularity. On it, the Unveil team offers its nearly 12,000 followers quick tips and hints for starting a conversation. The goal is to get people talking again — face to face.

“Conversation is a dying art, isn’t it? Text messages are taking over, and an emoji response can suffice. We’re just trying to bring back the art of conversation, to help people talk and get to know someone,” Geri said.

Unveil differentiates itself from other dating apps and websites by matching users with each other based on personality rather than looks.

“We researched all of the other dating apps. Many can serve a purpose, and it’s great that there is so much choice out there for people,” she said. “But we wanted to put a different, more authentic spin on it.”

Unveil is free — available on both Android and iOS — and is designed intuitively. Creating a profile, writing a little something about yourself, and uploading a picture is made simple.

The difference is, your picture is blurred out.

When you connect with someone based on what each of you wrote, the photo slowly reveals itself, and the only way to see someone’s picture is by exchanging multiple voice messages.

Unveil is free to download and use, with no in-app purchases or VIP memberships.

“Then you can see their profile picture. You add that bit of mystery and excitement as well. Everyone I’ve spoken with who has used the app loves that feature,” Geri said. “It’s all about not judging someone based on their looks, not being superficial,” she said.

Of course, you can also choose to keep your photo blurred if you’re not enjoying the conversation with the other person. That provides an extra level of security for users.

There are no in-app purchases or VIP memberships on Unveil, and you aren’t obligated to listen to any messages. Each user has the control he or she needs to find love.

Unveil is Planning a Global Expansion

Geri and her team have been working to make Unveil function as smoothly as possible, and now they’re hoping to expand its functionality to serve more users throughout the world.

She said she loves encouraging socialization and helping people feel good about themselves. Even getting people talking is worth it because it takes the pressure off people and shifts their intent away from finding “the one.” Often, singles lose themselves in that search.

“We’re in a world of wannabe-Kardashians at the moment, and we’re taking it back to the real,” Geri said. “So many people don’t even realize that they’re swiping based on what they see. When we’re in a conversation, we may make a judgment about where they went to school or their job title, but those bits of information don’t make them any better of a person than the next.”

Geri wants Unveil to play a role in reprogramming how people size up prospective dates by helping them focus more on personality than on physical appearance.

“We want people to get to know people for who they are before they make any superficial assumptions about them,” she said.