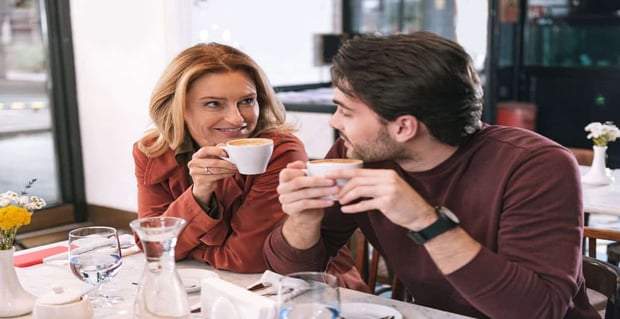 Should I Date Younger Men?

Maybe you’re a single senior lady who’s been dating and available for a year or two now, and it just seems that there aren’t that many good senior men to choose from. Maybe you’ve been on some senior dating sites because you want to increase your chances of finding love, but you still haven’t met that special someone.

Whatever your situation, chances are you’ve asked yourself at some point, “Should I date younger men?” I am here to tell you to go for it!

Much of society tells women that they should not date younger men. A lot of people picked up that cultural attitude when they were in school. Or sometimes it’s adult kids who pass judgment on their mothers making them feel bad for wanting to date a younger man. But this is your life.

Wherever the bias stems from, modern senior women date men of all ages. When looking for a relationship-minded man, always keep an open mind. You never know where Cupid’s arrow will lead.

Here’s more about what I think about senior women dating younger men:

If Younger Men are Pursuing You, Give Them a Chance

When Edward Albert’s character first starts to pursue Liv Ullman’s character in “40 Carats,” it’s all about sexual chemistry. She thinks he just wants a fling. But when he starts to pursue a lasting relationship with her, all her sexual mores, hang-ups, and beliefs about age-gap romances start to bubble to the surface. With her limiting belief system, she simply cannot fathom that he would find her more appealing than a woman his own age.

Why not go on a date with a younger man if he asks and see how things go?

Maybe that resonates with you a bit. Maybe you weren’t looking for love in the arms of a younger man, but you put yourself out there in the single senior scene, and that’s what happened. Embrace it and enjoy it.

Be open to love whatever the packaging. Sure, be smart and take it slow to allow room for a relationship to develop. But when a man is attracted to and pursuing you, accept the dates from him and put your age-defining limiting beliefs on the shelf. Hang on to your requirements for commitment. Just don’t let his age be one of the criteria.

When Fishing for a Relationship, It Helps to Cast a Wide Net

The next time you get together with your girlfriends, pop open the cork on a fun bottle of wine and sit down to craft your online dating profile. Maybe you first envisioned yourself in a relationship with a handsome man your own age, but, by the third glass of the cabernet, one girlfriend chirps up, “Cast a wider net!” And she cajoles you into expanding the age range to more than five years younger. You giggle and say, “Sure, what the heck!”

The big takeaway is to make a concerted effort to increase interactions with people in a broader age range. Get out there and place yourself strategically in society to keep meeting new people. It can be on a senior dating site or at a cocktail party. The gathering place really doesn’t matter, though. The habit of dolling up, going out, and having fun around others is what will yield a fun social life and possibly love after 50.

If Taye Diggs à la “How Stella Got Her Groove Back” crops up in your path, accept his pursuits and consider a relationship. Give Cupid more chances to zing that arrow of love at you.

Don’t Give Up on Romance Just Because You’ve Been Single a While, You’re Divorced, or You’re Widowed

In “All That Heaven Allows” with Jane Wyman and a young, hunky Rock Hudson, Jane’s character is a widow with adult children and hometown friends who all think she should sit at home happy being happy just watching television. Or they believe she should pair off with a much older man who, presumably, is no longer interested in sex. Jane’s heart is mending, but she hasn’t given up on herself as a sexual and romantic woman like all her friends and family seem to think she should.

The trees on her property need some proper care, so she hires Rock Hudson’s character to be her arborist. He’s attentive and treats her like a real woman, not to be put on the shelf and forgotten. In accordance with the mores of the 1950s, she acquiesces to her adult children’s wishes for quite some time not to pursue another romantic relationship. To them, the stigma was so strong that she shouldn’t be interested in romance and especially with a younger man. But love and mores shift. Jane and Rock’s characters do end up together, a romance blooming by the end of the movie.

Being divorced or widowed doesn’t mean you should be put on a shelf and forgotten.

My point is that this is modern life, not the 1950s. Sure, your friends and children may not immediately take to the age difference between you and your younger date, but don’t put yourself on the no-dating shelf just to please other people. Better to let them meet and mingle over family dinners and social gatherings until they come to realize he is now truly part of your life.

You Never Know Where Love Will Find You, So Keep an Open Mind

Another example of age-gap love is in the film “Tim” with a young Mel Gibson and hour-glass figure Piper Laurie. Their characters weren’t specifically seeking an age-gap love affair. It just happened.

Their romance is a tad reminiscent of the flipside of Pygmalion in that she teaches him to read and write, thus creating the nest for their romance to blossom. Their romance is unexpected and leads to marriage.

The takeaway is to keep an open mind and continue to be engaged and involved in life. Don’t let other people’s opinions impede the romance that Cupid sends your way.

The reality is with the ever-changing romantic socio-culture, age-gap relationships are becoming more acceptable and fairly common. In fact, they represent as many as 34% of mature women’s relationships. You owe it to yourself to consider dating younger men, so place yourself where they just may find you. Happy dating!

Why Do Older Men Like Younger Women? — 7 Reasons From a Senior Dating Coach

Should I Date Younger Women? 8 Factors to Consider in Senior Dating