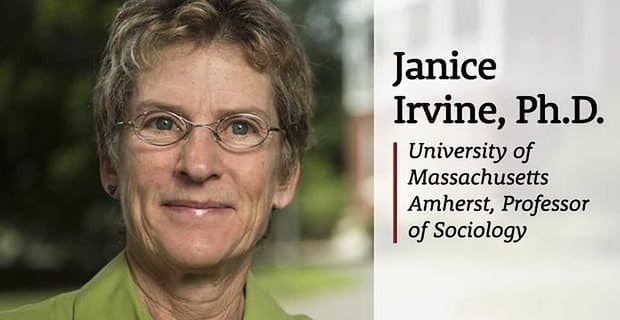 The 411: Dr. Janice Irvine may be going on her 22nd year at the University of Massachusetts Amherst, but she’s been working to get rid of the stigma that surrounds sex education since the ’80s.

Dr. Janice Irvine has always been interested in political activism, but it wasn’t until her graduate student years at Brandeis University that she discovered her passion for sociology, particularly when it comes to sex education and controversies over sex education in the U.S.

Now as a professor at the University of Massachusetts Amherst, Irvine uses that passion to examine how sexual knowledge is produced, who produces it and the role entertainment plays, especially with shows like “Transparent” and “Masters of Sex” being so popular.

“Sexologists started emerging in the 19th century, so there were always controversies over books that people published or lectures they gave or institutes that were established to study sexuality because people thought it was ludicrous to study sexuality,” she said. “These ongoing controversies, which I’ve written about for a long time, have just continued to intrigue me.”

While this article will only focus on Irvine’s latest article, “Is Sexuality Research Dirty Work?” you can see more of her work at www.umass.edu.

Do those who study sexuality do “dirty work”?

In “Is Sexuality Research Dirty Work? Institutionalized Stigma In the Production of Sexual Knowledge,” Irvine uses a survey she developed to examine the sociological concept of “dirty work,” a form of work that is considered socially necessary but is also socially stigmatized, such as funeral directors or garbage men.

Out of 400 questionnaires sent, all to members of the American Sociological Association whose work focuses on sexuality, she received 200 responses, which included situations where students couldn’t find mentors and professors couldn’t get tenure because of the topic they chose to study.

“People who have worked in this field have always had to deal with controversy about it,” she said. “It was just really surprising to me how many obstacles sexuality researchers still encounter.”

Dr. Janice Irvine studies culture and sexuality at the University of Massachusetts Amherst.

Another interesting finding was that people would assume sexuality researchers participated in the acts they studied.

“If they were studying gay issues, everybody assumed they were gay. If they were studying bondage, everybody assumed they did that kind of thing. Whatever it was, people thought they had a personal agenda somehow, which isn’t necessarily what we assume about other people doing other kinds of research,” she said. “It was interesting to me how many people reported colleagues and people at conferences or even family members and friends making these assumptions based on the sexual topics they researched.”

Irvine also found these assumptions happened more to women than to men.

“Men would often come on to them, they would get harassed by people they met or they would get these emails from people they didn’t even know from all over the world,” she said. “The topic sexualized women researchers in a way that seemed to make people assume they were loose women.”

With every study she conducts, Irvine strives to expose dilemmas that surround sex education.

“I’m hoping people who don’t study sexuality will read this work and realize that this is a problem, and I’m hoping that more junior faculty members can bring this work into their departments and use it to educate people and raise consciousness,” she said.

And what motivates her to put an end to the stigma is the positive feedback she receives and the cultural change she sees.

“The thing I find really interesting is the major players in sex research, like Masters and Johnson and Alfred Kinsey, have been controversial and stigmatized, and at the same time, they’re still so culturally iconic,” she said. “There have been so many films made about Kinsey, and now the ‘Masters of Sex’ show has been so popular. I think there’s a real interest in both sex research and the researchers who do it, but it is interesting to me that the stigma still persists.”