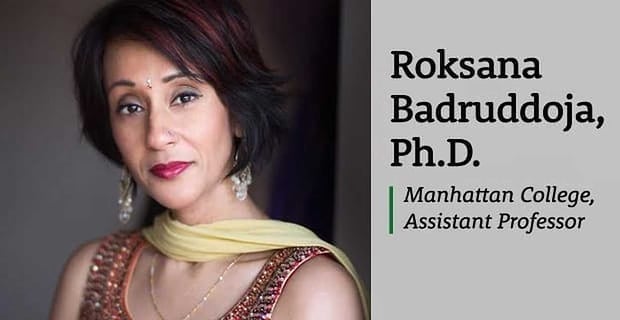 Dr. Roksana Badruddoja: What Does It Mean to Be a Woman in America?

The 411: No matter what she’s working on, Dr. Roksana Badruddoja dives head first into her research with dedication and passion, especially when it comes to helping the status of women.

Dr. Roksana Badruddoja may have an MBA in finance, but her true calling is sociology, something she discovered when working at a domestic violence agency and shelter 16 years ago.

“It was there that I really started looking at women’s roles in societies at large and the intersection of being a woman and the violence we experience,” she said.

Now as an Assistant Professor of Sociology and Coordinator of Women’s and Gender Studies at Manhattan College, Badruddoja mostly focuses on sexuality and gender, how these are constructed in American culture and how that construction affects women, particularly South Asian-American women, and forms representations of who they are and what they should be.

“Beyond that, as I explore  these constructions, I’m interrogating how power is created,” she said. “My purpose in looking at power is to figure out how oppression and marginalization are socially created in this country and what types of social categories we are trying to maintain.”

How are women represented in America?

In her special topics course on Sex and Violence, Badruddoja strives to find out what it means to be a woman in American society, who creates these meanings and who benefits from these meanings.

She argues that ideas of what the typical American woman should look like and what she represents maintains patriarchy, heterosexuality and whiteness.

“Patriarchy, heterosexuality and whiteness are key paradigms in constructing American culture and more so in constructing nationalism and the ideal typical citizen,” she said. “We don’t want to think beyond these categories because then it brings into question male privilege, straight privilege and white privilege. Here, what I really want my students to think about is the ways in which we’re categorizing people.”

Dr. Roksana Badruddoja’s research areas include race and ethnicity, sexuality, gender, religion and culture and how these impact South Asian-American.

According to Badruddoja, talking about American culture in this way often makes people uncomfortable because some are quick to judge other countries’ treatment of women before their own.

“I’m really urging our students to look in our own backyard when it comes to thinking about women and our status,” she said. “The fact that one in five women on college campuses are assaulted cannot be easily dismissed. Before we start looking at other countries that we’ve categorized as ‘backward’ and ‘oppressive’, we need to understand our own oppression as American women.”

She explores this even further in her latest article called “‘Third World Woman’, Family and Marriage: South Asian Diasporic Fiction as a Site for Consolidation of the American Nation-State,” which is a content analysis of three popular American books written by South Asian-American authors.

Badruddoja’s book looks at how the South Asian Diaspora negotiates various forms of identities, from sexuality to religion to culture to femininity and masculinity to motherhood.

Badruddoja analyzes these books in order to examine the ways in which South Asian women are being constructed in the U.S, and her analysis lies at the intersections of race, class, gender and the nation-state.

She also wanted to dispel this notion that South Asian-American are “free” once they come to America, as well as other stereotypes.

Making it safer for women everywhere

It’s easy to see that Badruddoja is a passionate woman who cares about her work, but her first desire is for people to understand that Americans do not live in a post-racial and post-sexist society and that American women do not fare better than their counterparts in other countries that are under the spotlight so often, like India.

“The argument that I make is that it is dangerous to be a woman anywhere. There are different ways of creating violence around women and women’s bodies based on the national space,” she said. “Women are targets everywhere, and our bodies have been used historically as a platform for violence.”