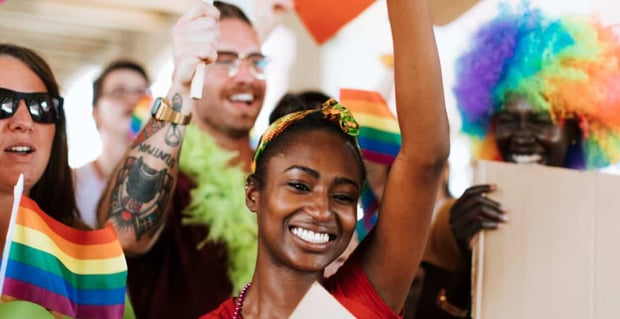 After decades of untold struggle, love has finally won.

In a historic ruling today, June 26, 2015, the U.S. Supreme Court declared in a 5-4 decision that it is legal for same-sex couples to marry nationwide.

Refusing to grant marriage licenses to LGBT couples now is a violation of the constitution.

This matrimony battle, which many have called the “defining civil rights challenge of our time,” comes to a close with this landmark decision, meaning the most significant change in laws of marriage since the court denied state bans on interracial marriage.

History Leading Up To The Decision

Before the Supreme Court made it’s decision today, they had two main concerns: if any part of the Fourteenth Amendment urges states to perform same-sex marriages — and if not, would states be required to recognize gay couples who married in a state where it was legal.

Fortunately, these are no longer concerns.

Massachusetts broke ground for the LGBT community in 2004 when it became the first state to allow same-sex marriage. In the subsequent years, the U.S. government offered certain benefits to same-sex couples because other states began following suit.

When the Supreme Court ruled that same-sex couples must be afforded the same federal benefits as other married individuals in 2013, the case behind today’s ruling began — although that decision did not solve the question of gay marriage as a Constitutional right.

Before today’s landmark decision, at least 36 states and the District of Columbia recognized gay marriage in some way, but the other states had passed state laws banning same-sex marriage. Today’s ruling means the ban has to end in states like Alabama, Ohio and Texas.

Referring to the decision as a “victory for America,” President Barack Obama spoke from the White House in full support of the Supreme Court’s ruling. He has always pushed for issues of gay rights, especially during his second term.

“When all Americans are treated as equal we are all more free,” Obama said.

Although he emphasizes that social progress is sometimes slow, the advocacy for same-sex matrimony has become increasingly popular.

Public support for gay marriage has reached a new high, with 61 percent of respondents saying gay and lesbian couples should be allowed to legally marry, according to an ABC News/Washington Post poll two months ago.

While there is a strong support system for married gay couples, numerous Christians and Republicans are still opposed. The questions is how they will act in public and in politics regarding the issue now that this ruling has been established.

Will they continue to oppose gay marriage and fight to reverse this decision the way conservatives have in the past with other things? And how they will they respond to other issues that involve the rights of LGBT Americans?

Individuals like Justice Antonin Scalia, who wrote the dissent for the decision, called the ruling a “threat to American democracy.” He and other opponents of gay marriage are the reason there won’t be peace, even after the Supreme Court’s final verdict.

Lasting Effects Of The Decision

Supporters like Jim Obergefell, the lead plaintiff in the landmark case, recognize the historical significance of the decision and fully embrace the positive impact it will have.

“Today’s ruling affirms what millions of people across this country already know to be true in our hearts: Our love is equal,” Obergefell said. “It is my hope that the term gay marriage will soon be a thing of the past. It will simply be marriage. And our nation will be better for it.”

In the last year and a half, court rulings struck down nearly 60 separate decisions that called for marriage bans in more than half of the United States. This progress in public and judicial acceptance of same-sex marriage is remarkable.

Today’s decision  also overturns a ruling from the Sixth Circuit Court of Appeals in Cincinnati, saying states had reason to maintain a traditional definition of matrimony.

The appeals court also said it would be better use customary political processes rather than the courts when dealing with change.

Public opinion has shifted dramatically in recent years on the issue of same-sex marriage, and it will continue to evolve over time with equally as prominent matters.

But today, the lingering battle for gay couples has come to an end. Love is love, and love always wins.