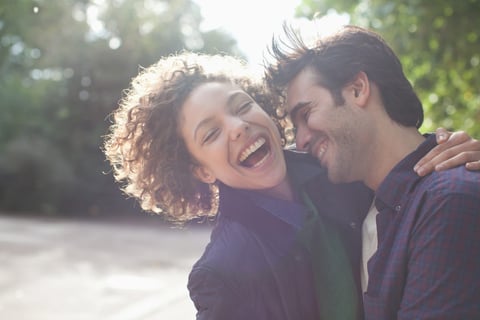 Who consistently provides us with the best quotes on love? Comedians.

Their relationships always seem strong, devoted and, well, hilarious. Who wouldn’t want to be part of a couple like that?

It’s no wonder one in four Americans say humor is the most important quality in a partner.

Clearly, there’s something to this being funny business.

To find out more, we surveyed more than 1,000 Americans to see which demographics rank humor above all other qualities. Who’s looking for love with the next Jeff Foxworthy? The results piqued our interest.

With 34 percent of our respondents with an income between $100,000 and $124,999 placing humor first, we found wealthy people are at much greater odds of saying humor is more important than less affluent people.

But why is that? We brought in our dating experts to offer their thoughts.

“Thirty-four percent of respondents with an income

Chair of Psychology at Monmouth University and co-creator of ScienceofRelationships.com Gary Lewandowski Jr. suggests when you have sufficient financial resources, “You can look for a more fun and intellectually stimulating trait.”

However, if you aren’t as well off, you might focus on traits that are more likely to provide you with the resources you lack. These could include being ambitious, hard working or others along those lines.

According to Harman, a few theories of humor suggest we enjoy jokes that put others down. We make fun of others to make ourselves feel better.

“The fact that this is something a higher status group values may point to an insecurity in their status and a preference for other people who also feel that way,” Harman said.

She also pointed out that being humorous is associated with intelligence, creativity and social skill, which are typically traits that are paired with wealth and status.

Humor would then be an indicator of finding someone with those qualities – typically, someone else with higher status.