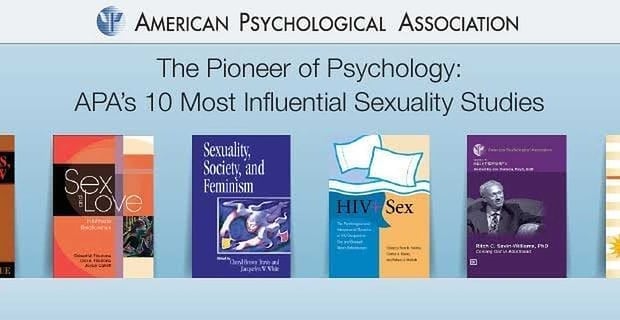 The Pioneer of Psychology: APA’s 10 Most Influential Sexuality Studies

Since 1892, the American Psychological Association (APA) has been paving the way for advancing the creation, communication and application of psychological knowledge to benefit society.

With nearly 122,500 members and 54 divisions in sub-fields of psychology, the amount of information it yields to scientific research is immeasurable. In an effort to understand the relationship among the brain, environment and behavior, one aspect APA focuses on is human sexuality.

By conducting a variety of studies and publishing the results, APA has helped psychologists and other physicians to better understand things like sexual functioning, intimate relationships, STDs and sexual orientation.

As the largest scientific and professional organization representing psychology in the U.S., here are 10 of APA’s most influential sexuality studies that prove its prominence in the scientific community:

1. It’s Possible To Understand Women’s Sexuality In A Positive Way

It is at the root of these issues, but it’s a subject we barely understand.

Because of the lack of information science has produced on how women experience sexuality throughout life, APA uses this study as a call for feminist scholars to form methods of inquiry that establish a feminist agenda.

Applying a feminist lens to the ways American society defines women’s sexuality, scholars in this study offer an alternative, more positive approach to understanding this area of human behavior and emphasize that it is a social phenomenon.

Extramarital sex is a leading cause for divorce, and adults who have a more positive outlook on it are obviously more inclined to engage in the cheating. Unfortunately, pornography often displays extramarital affairs and can influence attitudes.

In this study3. HIV-Positive Gay And Bisexual Men Can Celebrate Their Sexuality

There is such a negative stigma surrounding HIV because it used to be a death sentence.

This study illuminates the struggles that still exist in the HIV-positive community.

However, now gay and bisexual men with HIV are living longer, healthier and more sexually active lives than ever.

This study illuminates the struggles that still exist in the HIV-positive community as these gay and bisexual men engage as sexual beings, but it also gives voice to the stories of how hundreds of individuals celebrate their sexuality.

Delving into how they make decisions about sex, express their sexuality, choose partners and balance their health, along with extensive behavioral research, the study offers meaningful information on something that is highly misunderstood.

Sexuality is just as fulfilling as it is complex. Men and women often find it difficult to discuss and negotiate intimate relationships because therapy emphasizes physiological issues — one of the reasons the authors of this study believe psychological problems are at the root.

Using a longitudinal study of couples and families, Firestone and his co-authors propose that sexual problems are largely a result of traumatic childhood experiences. The illusion of a connection to the primary caregiver called a “fantasy bond” leads to negative internal “voices.”

These voices interfere with closeness and intimacy, but as the authors show in this study, people can overcome the physical and emotional issues.

5. The Sexuality Of LGBT Clients Can Affect Many Life Issues

Coming out in general can be a difficult situation, depending on how your family, friends and work handle the news.

Dr. Ritch C. Savin-Williams explores how the sexuality of LGBT individuals can impact their self-image.

In this study, Dr. Ritch C. Savin-Williams explores whether and how the sexuality of LGBT individuals can impact their self-image, relationships, careers and other choices in life.

He specifically focuses on adulthood, where he works with an African-American woman in her early 40s who comes out as a lesbian after being married and having two kids.

Because of her discomfort in public and other LGBT clients’ issues with their sexuality, Savin-Williams makes an effort to instill optimism in a world that’s heterocentric.

6. Misconceptions About HIV And AIDS: Prejudice Is Unwarranted

There is a multitude of diseases that cause fear because people are simply uneducated on the details. HIV infection and AIDS are two of the most misunderstood illnesses, as many people have misconceptions of how the two relate and how they spread.

Psychologist, researcher, educator and AIDS prevention counselor Seth C. Kalichman addresses these errors in this study by answering more than 350 questions about HIV and AIDS.

Misinformation about these illnesses leads to unwarranted fears and prejudice, so he sets the record straight. Kalichman provides guidance on issues like sexuality, social challenges and health care.

7. The Juvenile Justice System Is Not Effective For Adolescents

Existing laws prevent adolescents from having access to social services available to adults, even though they experience things like domestic violence and sexual harassment.

At the same time, adolescent offenders can be moved from juvenile to adult court.

In an effort to convey that adolescents are neither children nor adults, law professor and attorney Roger J. R. Levesque presents the flaws of the juvenile justice system and proposes a strategy to re-frame the concept of adolescence in his study.

Levesque argues for changes that would make adolescents responsible citizens but also reflect the realities of their age and maturity levels.

Studying the neuroscience and endocrinology of sexuality has released an explosion of research in the last decade. As experts in the field of psychobiology of human sexuality, contributors of this study present a variety of findings about the interrelationship of biology and sexual behavior.

The revelations discuss how compulsive sexual tendencies may be rooted in the limbic system, lesions in the hypothalamus can eliminate sexual behavior, women with spinal cord injury can orgasm and neurotransmitters are closely linked to sexual response.

Also mentioned are the practical implications for treating sexual disorders and other related issues.

9. Recovering From Childhood Abuse Is Particularly Difficult For Men

Experiencing abuse at a young age can have lasting effects in adulthood.

The gendering of victimization can make recovery from abuse especially difficult for men.

It leads to issues with trust, vulnerability, intimacy and safety.

The gendering of victimization can make recovery from this abuse especially difficult for men, as Dr. Laura S. Brown explores in this study. She works with a 30-year-old man who was abused as a child and explores all of the difficulties he still endures.

Brown’s client is challenged by intimate situations, letting his guard down and opening up to others because of his past. She engages in a long process to help him feel safe enough to trust another person again after the trauma he experienced.

Because of the backlash and criticism that non-heterosexual adolescents experience, the constant phrase of advice is, “it gets better.” As they struggle to be accepted and have confidence, heterosexual teens seem to have it much easier socially and mentally.

This study explores that idea, and the results are consistent with the minority stress model and identity formation theory.

While self-esteem for the two groups is no different, the non-heterosexual adolescents have higher levels of depression, suicidal thoughts, social alienation and alcohol abuse. Psychologically and socially, these two groups are worlds apart.

Through these sexuality studies and numerous others on topics ranging from addictions, depression and parenting, APA remains leader in psychological research. The progress that has been made in the science world would not even be close to where it is today without this association of talented individuals.