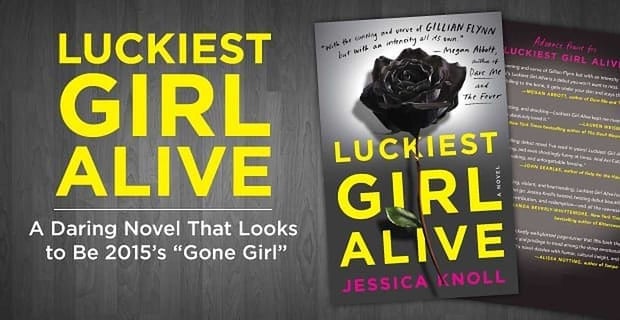 The 411: Jessica Knoll exposes the real, raw thoughts of millennial women in her twisted and sharp debut novel, “Luckiest Girl Alive.” With advance praise for the book, Lionsgate received the movie rights to the story, which will be produced by “Gone Girl” producer Reese Witherspoon.

TifAni FaNelli has it all: an envy-worthy wardrobe, a trophy husband-to-be and a secret. The 28-year-old’s glamorous New York City life holds everything most women only dream about.

You can imagine her horror when a documentary threatens to expose the one true blemish on the surface of her perfect life — a chilling and gruesome part of her past.

Jessica Knoll’s debut novel, “Luckiest Girl Alive,” which is officially available today, is a wickedly deviant tale of a girl torn between her present facade and flawed past.

Ani FaNelli narrates the underlying thoughts of the modern woman — the real, ugly, unconventional honesty of a woman combating the criticisms of contemporary culture.

“Why do the guys get a pass for their bad behavior and women don’t?” Knoll asked.

We sat down with Knoll to discuss the heart and history of this captivating new story and its brooding heroine.

Happiness May Only Be Skin-Deep

The story’s protagonist is a competitive, ambitious New Yorker juggling wedding planning and meeting the demands of societal standards.

Knoll shared with us her goal in writing this character: “to write a real woman.”

“She’s angry, she’s vicious and she’s judgmental in her head, because this is how the culture has shaped her,” she said.

Knoll offers Ani’s character as a “cautionary tale,” heeding women of the dangers of looking to status quos for happiness and acceptance.

This leading woman is a dominant force to be reckoned with in her world, but she isn’t a likable character at first glance.

While trying to find her way in a well-established, old money community of a suburb outside Philadelphia, as the outsider from the wrong side of the tracks, Ani is the “anti-hero who does despicable things,” yet you love and root for her in the end.

Are You an Ani?

Similar to Ani, Knoll was raised in the suburbs of Philadelphia and faced a 45-minute commute to a school of very privileged classmates. Knoll began writing the book when she was 28, after a career in the magazine industry, which she loved and still considers a special part of her “roots.”

“There’s no one character that I’ve ever written about that I don’t feel some sense of tenderness to,” said Knoll, who added she even had a soft spot for some “straight-up villains” in “Luckiest Girl Alive.”

“I think there are elements of me in all of my characters,” she said. “They’re a little bit like me, but also a little bit off.”

While writing “Luckiest Girl Alive,” Knoll was dating her now-husband and was facing the inevitable engagement question from peers.

“It felt like unless I was engaged, I didn’t have it all,” she said. “I was really ashamed of that feeling because I consider myself a feminist, and I consider things like my career and my friends and the life I built for myself in New York as achievements.”

Knoll channeled those insecurities to create her leading lady in Ani.

Millennial women face unbelievable pressures to be thin, docile, likable and submissive, and Knoll asked the question most women won’t: Why do guys get passes for bad behavior but women do not?

“Luckiest Girl Alive” has already taken on a life of its own. After a bidding war, Simon & Shuster moved Knoll’s manuscript to print and set May 12 (today, people!) as the release date.

In even more exciting news, Lionsgate recently received the movie rights to the story, with producers Reese Witherspoon and Bruna Papandrea, of Pacific Standards Films, behind the wheel.

While Knoll has been advised not to share her preferences on the actress to star in the film, she did share that “there aren’t enough really meaty roles for women, and this is definitely one of them.”

As we all patiently await the premier of this cunning, contemporary motion picture, what’s next for Knoll?

She will be writing the script for the film as soon as she’s given the green light from the studio. Then it’s only a matter of time before the devilish thoughts of Ani FaNelli are forever immortalized on the big screen.

Pick up your copy of this defiantly captivating page-turner on Amazon, Barns and Noble, IndieBound, iTunes and Google Play, but be forewarned: you won’t be able to put it down until you’re done.