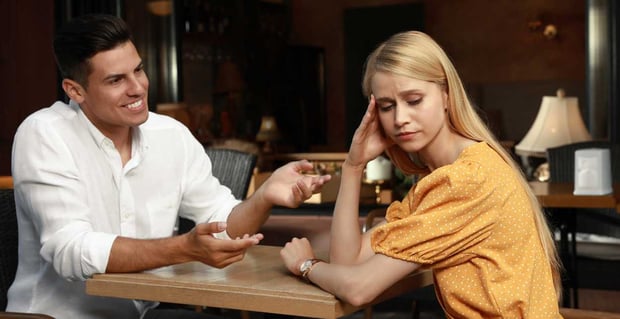 If you’re serious about meeting a guy, you’ve probably already read a ton of articles with different points of view on the best way to conduct yourself when meeting Mr. Right.

When you are ready to meet the man of your dreams, it’s important to know the right way to act.

One mistake can cost you the chance of meeting a great guy, send you home with a tub of Ben and Jerry’s and leave you wondering why the universe is conspiring against you. It’s not.

Relationships are fragile, especially in the beginning.

Whether it’s a blind date or a chance meeting when you’re out with your friends, it’s important to realize body language and behavior can go a long way with the initial meeting.

OK, imagine this situation: You’re out with your friends and you notice a guy at the other end of the bar or restaurant glancing in your direction and even throwing smiles your way.

What do you do?

1. Don’t turn and whisper to your friends.

“Hey, look at that guy over there. He just looked at me!” Suffice to say, he will immediately be turned off because he’ll think you’re talking about him and mocking him in some way.

Believe it or not, guys are sensitive creatures. The thought of being mocked will kill any chance of him coming over.

Worse, it’ll also communicate that you’re immature. Keep in mind he was looking at you, not your friends!

If you like the man who’s looking at you, do not look away. Facial expressions say so much about how people perceive you, whether you know it or not.

Hold a glance back at him for five seconds. This lets him know you find him attractive, too. Look into his eyes and let him look into yours.

Smile a little bit and share some positive energy with each other from a distance. That’s where the magic happens!

Remember “West Side Story” when Tony first met Maria? There is no reason you can’t have a piece of that.

You don’t have to start dancing with him in the middle of the bar or restaurant, but you get the idea.

“There is one thing these rules have

Give him the chance to come over to you.

Maybe he will tell the waitress to send you a drink. If this happens, and you like the guy, accept his kind gesture, look over to him, smile and say thanks!

This gives him the courage to come over, especially if he’s with his friends! While he’s approaching, remember rule number one: This isn’t the time for an “Omg moment.”

When he gets there, say thank you and ask for his name. He’ll feel special and appreciated.

4. Don’t ignore the friends you are with.

If and when he does come over, be kind, smile and introduce yourself. Then introduce him to your friends.

This will give him a sense of importance and acceptance with your group. He’ll think you’re a sweetheart, and that is a very attractive quality.

If you ignore your friends, they’re going to pull you away from him, and instead of helping you meet a great guy, they’ll sabotage the encounter. Nobody likes being ignored.

If you act catty and rude to the less desirable men, the ones you really want are going to see that.

They watch how you treat people, and if they see you act like a diva, they’re going to have second thoughts about getting to know you.

This doesn’t mean you have to carry on with a guy you’re not interested in for two hours, though. Be nice and graciously excuse yourself from him.

You’ll show everyone you are kind, and that is very sexy.

In the beginning of an interaction, there is little margin of error on both sides. But this does not mean it’s all over if you make a mistake when talking.

There is one thing all of these rules have in common: They are all about conveying emotions, and each one of these rules makes sure you are shown in a positive light.

It won’t matter if you say the wrong thing. People have the memory of a goldfish, so they won’t remember!

What they will remember is how you make them feel.

Take our dating advice, and hopefully you can avoid these mistakes when meeting men.

Are You Fishing for Men in the Wrong Pond?

To Meet Great Men, Focus On Yourself (And 4 More Ways)

15 Ways to Meet Someone New (After a Breakup, Divorce, or Any Situation)

How to Meet Guys (11 Surefire Ways to Meet Someone New)

How to Be Proactive in Dating (7 Tips From an Expert)