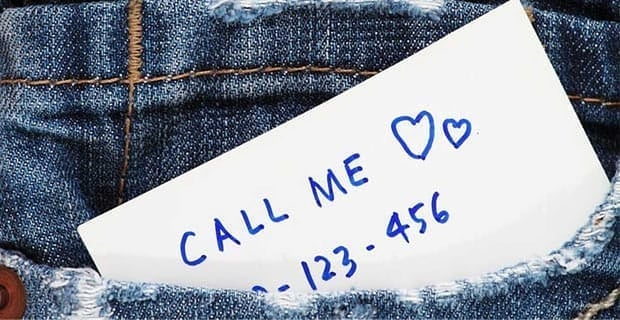 How to Get a Guy to Ask for Your Number

So, Captain Terrific finally approached you. You hit it off with a great conversation and a few laughs. You really like him, and you’re sure he likes you, too. But you just can’t leave it to chance and hope it happens again sometime. You have to get your number into his phone or wallet.

How can you make that happen? Here are a few tips:

This one is kind of a no-brainer, but it’s the most important step. He has to know you are interested in him as a man and not just a friend, and he has to be able to feel the excitement and the possibilities of romance that might be available to him if he were to pursue things further with you.

A simple, “I don’t see a ring. Are you married or seeing someone?” will let him know you don’t just want him to help you pick out shoes on your next trip to the mall.

Men fear rejection and need to know they won’t get smacked down if they make a move in the direction of romance.

2. Find a reason to see him again.

Look for a hook in the conversation that you can latch on to. Maybe he mentions a new sushi restaurant, a bar that’s starting free Happy Hour appetizers, the latest movie, a new exhibit at the science museum, or a great bruschetta at the coffee place. Jump on it and tell him the two of you should try that sometime — maybe next week.

Even if you actually land a time and date for coffee or sushi, you should still say that you need to exchange numbers in case something comes up. If he takes out his phone, just take it from him, call your phone, and let it ring once or twice. You now have each other’s number.

Then, as you hand him his phone back, make sure he adds your number to his contact list and puts your name on it. You should put his name in your phone right away, too.

“If you don’t hear from him within a

reasonable time, you can always drop him a text.”

3. Find a reason to text him later.

If he isn’t picking up on any hints to ask for your number, find a reason to ask for his. Maybe his family is coming over for dinner on the weekend and he doesn’t know how to cook very well. Tell him you can text him your famous recipe for lasagna or pot roast when you get home.

When you send the text, add a note: “Call me if you need any help along the way, or just to let me know how it went!”

Maybe he wants to see Doobie Schwartz play his guitar at the coffee house and you have the calendar at home (well, you might actually just call them to find out) and you can text him the dates he will be performing later.

The place where you got that $9.99 oil change, the name of the book you read last year with some information he needs, the dates of the Uptown Art Festival, or the parks that will be having fireworks can all be reasons to get his number so you can text him later.

Maybe you have a picture on your cell phone he likes. Hand him your phone and have him text it to himself right now. Once you text him for any reason, he will have your number and a reason to respond.

Just take out your phone and start playing with it. Pretend you got a call or a text or that you need to check your email. Bring up a picture of yourself and ask him if he thinks you should use it for your profile pic on Facebook. Ask him to take a picture of you. Any reason to make your phone the center of attention will do.

If he asks about your phone or wants to see it, tell him, “I’ll show you mine if you’ll show me yours — your phone!” Take his phone, look at it for a while, and then call your phone. When he tells you your phone is ringing, tell him to answer it because it’s you.

Once you start playing with your phones, you will definitely end up with each other’s numbers.

If it’s time to go and he still doesn’t have your digits, just tell him, “I really have to go, but we should continue this sometime.” If he agrees that it’s worth continuing, but doesn’t just ask for your number outright, you might need to prod him with, “How can we get in touch?”

If he’s a real Neanderthal, you might have to ask, “Should we exchange phone numbers?” Exchanging numbers is a less-direct way for a woman to give him her number without seeming forward.

With these tips, you should be able to get your phone number into the hands of most men. To avoid the “waiting for the phone to ring” syndrome that often follows, you should always try to do two things: Get his number too, and tell him when it would be a good time to call.

Be specific by saying, “You can call me Wednesday or Thursday at 7 or 8 p.m., or any day before 11 p.m. is fine, too.” And if you don’t hear from him within a reasonable time, you can always drop him a text to say that you were thinking about the fun conversation you had, and then ask how he’s doing.

How to Get a Guy’s Phone Number

How to Get Him to Call