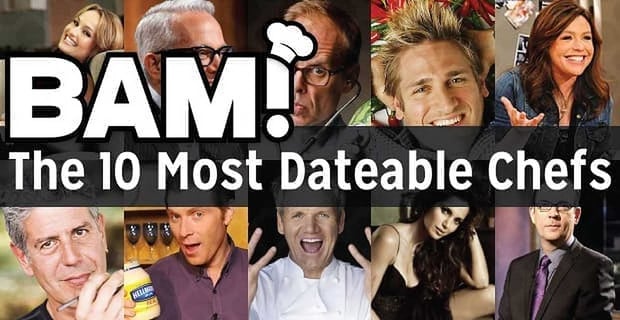 With more people Instagramming their lunches than actually eating them, foodies have taken over the world.

It’s seems like everyone’s caramelizing, deglazing and flambeing, so we’ve come up with a list of the most dateable celebrity chefs. Yes, most of these people are married, but in a perfect culinary world, they would be up for the taking like a Golden Corral buffet.

“Grilling his way into our hearts.”

Flay’s love of spicy Southwestern flavors proves he can throw down in the bedroom as well as the kitchen.

Sexy fact: This Iron Chef also has an interest in politics. He’s been quoted as saying, “After my restaurant career, I would like to go into politics at some point to help the city [New York City].” Can you say “Yes sir, Governor Flay”?

“She always keeps it al dente.”

Sure she over enunciates words like “spəˈɡeti” and “proh-shoo-toh,” but no one looks as sexy when grating a block of Parmigiano-Reggiano as she does.

Sexy fact: Olive oil isn’t just for cooking – De Laurentiis puts it on her face as part of her beauty regime. No wonder she looks like she’s 25.

Bourdain is the chef you’re mom wouldn’t want you to date, which makes him even hotter. He’s known as a culinary bad boy and isn’t afraid to let a few (or 20) F-bombs fly…in one sentence. My kinda guy.

Sexy fact: He was a lover of punk music, especially The Ramones.

“He’s willing to go down under.”

Known as “The Quiet Terminator” by fans of “The Celebrity Apprentice 3,” Stone is a pretty boy in the world of celebrity chefs. But behind those good looks is a master of food, life and, of course, love.

Sexy fact: Stone was named one of People Magazine’s Sexiest Men Alive in 2006.

“She’ll show you other uses for EVOO.”

Rachael Ray is someone every girl wants to be and every guy wants to date, and we’ll bet she can get more done in 30 minutes than just whipping up some shrimp fra diavolo.

Sexy fact: She’s a queen of designing for small spaces. We hope you like the color orange.

Gordon Ramsay is as passionate as they come. If you can look past his furrowed brow, you’ll see he’s got a heart of gold. Plus a man with so many memes deserves some recognition.

Sexy fact: His full name is “Gordon James Ramsay, OBE.” OBE stands for “Officer of the Order of the British Empire,” a title given to him by Queen Elizabeth II in 2006.

Padma Lakshmi is the only person who can constantly eat on a competition show and still look that good. And did we mention the Carl’s Jr. commercial?

Sexy fact: She played the love interest in the Eels’ music video for “The Love You Give That Guy.”

“Talk about some good eats.”

Alton Brown is a good ol’ Georgia boy who used to make biscuits with his grandma, Ma Mae. His Southern charm and knowledge of food make him the ultimate culinary and dating threat. If that doesn’t whip you into a frenzy, then your heart is as flat as a cheese souffle gone bad.

“The host with the most.”

We first fell in love with Ted Allen when we saw him on “Queer Eye for the Straight Guy.” Sure he’s always on the sidelines as the host of “Chopped,” but we guarantee he’ll be front and center in a relationship. And he’ll always be on time!

Sexy fact: Allen graduated from Purdue University with a degree in psychology.

Geoffrey Zakarian, or GZ to his Twitter followers, has the best style of any chef, but don’t let those hipster glasses fool you. He isn’t afraid to get down and dirty when it comes to cooking (and probably dating).

Sexy fact: Zakarian is a Leo, so you know he has a fire in him hotter than the flames in Kitchen Stadium.

To whet your palette even more, here’s a clip from “Creme Fraiche,” a South Park episode dedicated to our love of food and those who cook it.