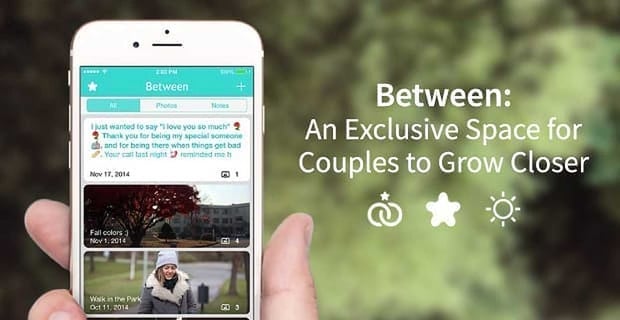 Between: An Exclusive Space for Couples to Grow Closer

The Short Version: Introducing the first-ever application geared especially toward couples: Between. In a world with countless communication and data-sharing portals, Value Creators & Company has constructed a private forum for couples to communicate, commemorate and cultivate lasting relationships.

Founded in 2011 by a group of guys from Seoul National University, Value Creators & Company’s mission focuses on just that — “adding value to our customers,” according to the team at VCNC.

Leading up to the startup’s launch, CEO Jaeuk Park noticed people were “growing wary of the open social networking space.”

That is, “we all talk to each other and we post pictures, but that doesn’t necessarily mean we want everyone looking,” the team at VCNC said.

Park and his team wanted to create a space for people to keep to themselves as the social networking space grew more and more overwhelming.

Introducing the “Hotline for Couples”

In a global launch catering to six diverse languages (English, Japanese, Korean, Chinese Traditional, Chinese Simplified and Thai), VCNC created a chat service that allows users to combine all of their social media communication sources rather than have conversations scattered about.

“Between is like a private room in a large, bustling cyber city somewhere you can focus only on each other in a world full of other people’s statuses, conversations and advertisements,” the team at VCNC said. “We believe the magic sauce that allows couples to grow closer is a combination of communication, remembering and planning.”

It seems this secret sauce is leaving tasters coming back for more.

The team reports that many users who have tried the app are now turning off notifications for other social media forums and relying solely on Between because they know who is connecting with them, and that’s who they care about.

It’s Not About the Breaths You Take but the Moments

One facet of Between’s platform definitely worth noting is the Moments feature. You can find this handy gadget in one of the main tabs of the app.

Moments is a portal to collect your shared Kodak memories as a couple, and Between automatically sorts the photos chronologically.

Couples are able to scroll through the photos they’ve taken over the last year and enjoy a “nice visual representation” of their relationship history.

In keeping with the theme of treasuring the moments, Between also has a calendar feature that allows couples to look back on past dates, as well as plan for future memories to be shared.

In their third year of service, with a team of approximately 40 innovative members, VCNC prides itself on its company atmosphere, as well as the feedback received from customers.

A fun fact about the company culture of VCNC is their TCIM benefit. Every other Monday, the company has lunch catered in, and employees are given the opportunity to submit anonymous questions about the happenings of the company.

The CEO addresses their queries to the best of his ability over lunch. This keeps the team members informed and connected.

Both of these applications are only available in Korea right now, but the team hopes to expand in the near future.

Results were very telling of cultural differences between these nations that we assume to be so similar to one another.

“As a heavily data-driven company, we love analyzing differences between countries and doing local marketing,” the team at VCNC said.

VCNC frequently receives letters and wedding invites from Between couples, even requests to incorporate thematic elements of the brand into their weddings.

As the company grows older, their loyal customers are growing with them, and many stay to reap the benefits even after the wedding bells fade.

In 2015, VCNC is focused on growing internationally, including bigger markets like Europe or the United States. Right now, this app is available anywhere that Google Play and the App Store can be accessed.

If you’d like to see your love life transpire into one of these happily-ever-afters, visit between.us.