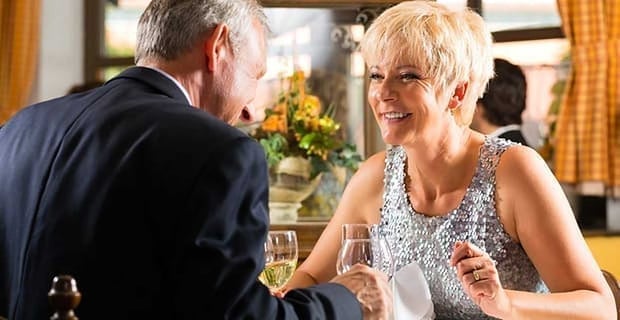 Dating in the 1970s, with the advent of the modern feminist movement, left so many boomer women confused about dating and the roles of men and women in contemporary courtship.

Modern dating can be confusing, especially if you’re freshly getting back out into dating either after divorce or death. You might be wondering, “How should I behave? What do the senior singles expect me to do?”

Nothing’s worse than jumping back into the deep end of the dating pool only to discover everything you’re doing is overly out of date and bordering on offensive to the opposite sex.

However, ladies, if you do everything for him what a man expects to do for you, you’re spoiling him like a little boy. Allow to me explain:

Who makes the first move in boomer courtships?

In order to create romantic chemistry, do so in a flirtatiously feminine manner. You can express your interest and receptivity to him and let him actually ask you out.

Alternatively, you ask him out, let it be as your plus one to the black tie semi-formal gala you’ll be attending next month in conjunction with your profession.

Do boomer men expect senior women to pay for dates?

Single senior men, for the most part, are expecting to pay for the first date and the next few that follow. He knows he’s displaying masculine prowess so let him.

However, do so by articulating your appreciation, “Oh what a lovely restaurant you selected. The food is delicious. What do you recommend I try?  Thank you for a wonderful meal. The food was wonderful, but the company was the best part.”

The vast majority of mature modern men expect to demonstrate their being gentlemen by paying for the meal. However, they simultaneously desire to be appreciated for who they are, not the meal they bought you.

Sure, you’ll find some of the PUA guys advising men not to pay for dates, but remember they have a different goal in mind than relationship-motivated singles.

“No man wants to feel he is

Should senior singles split the bill?

Splitting the bill “to be fair” is the behavior of women. Men, when they eat together, just alternate who picks up the whole tab.

Otherwise, you run the risk of your cobb salad costing less than his New York steak. Keep it simple.

How can I show him I’m not a gold digger?

You can give back to your mature mate after several dates when the two of you are moving into exclusivity and courtship by inviting him over to your home for dinner.

Many baby boomer men have been bacheloring it for so long that they are very grateful and appreciative of a home-cooked meal that is more than canned chili warmed up, takeout and omelets.

Of course, if he is an excellent cook, then suggest he join you in doing the food shopping and preparing a meal.

What about the holding the door dilemma?

If a man is gracious enough to hold the door for you, accept it with your most sparkling smile and words of thankful appreciation, “Oh thank you! Such the gentleman. What a treat!”

Of course, when his arms are laden down full of groceries, bringing them in from your food shopping for that special meal, you can be courteous to him as well by getting the door with no fuss as you take one of the bags or small boxes out of his arms.

No man wants to feel he is carrying the whole load of the relationship, either literally or metaphorically.

Just because you two are partners in modern life doesn’t mean you are each doing precisely the same things.

Where to Meet Senior Men

How to Be a Sexy Midlife Woman

The Right Way to Break Up with Your Senior Mate