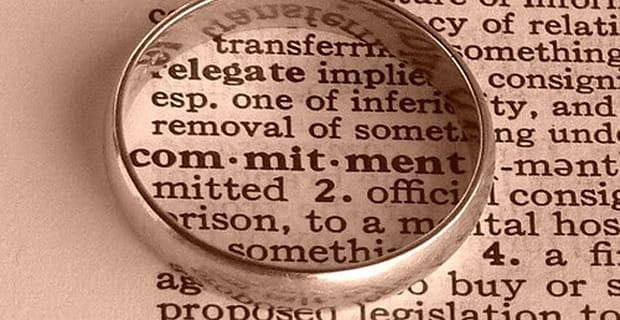 Many single men over 50 have confided in me as a dating coach that they just want to be lazy when it comes to dating, courting and romance now that they’re older.

Sure, their hormones aren’t wired the same way as their 20-something counterparts, but a mature man who has found his lady love still does make an effort and pursues her.

If that baby boomer guy you just started seeing is asking you to become exclusive after only the second date, it’s time to watch for the warning signs that it’s just too soon to commit and take yourself off the market.

Typically boomer men have already been married at least once by the time they’re in the senior dating pool, so they often already have an idea of what to say to grab a woman’s attention.

Mature men know single women want commitment with a man who wants a relationship. However, if he is racing to that finish line too fast, that’s a red flag.

1. He just doesn’t know you well enough yet.

With romantic love, men fall in love with a woman’s essence first, so it is possible that he could be in love with you after two dates.

But if you two only just met via that cool senior dating site, then your first date was really just a time to get acquainted, which barely qualifies as a date.

You want to make sure the two of you are acquainted and sharing weekly activities for at least a month before you consider his request for exclusivity.

time to grow some roots.”

2. He cuts you off from dating other men.

It’s one thing to dabble with exclusivity in your 20s when you’re too young to consider marriage, bo you want to take yourself out of the dating pool for a year or more at this phase in your life for someone who isn’t looking to marry you?

To become a couple changes your whole social life and blocks you from seeking out and meeting additional mature men who might actually be a great mate for you.

How a relationship-minded man treats you while courting you is his time to audition his behavior with you.

You want to look for what his love language expresses to you during this courtship phase of the relationship before you allow him the prize of winning the coveted boyfriend position in your heart.

And while you two might feel it’s premature to discuss the M-word, have you at least started talking about your desire to marry and what you want in a marriage?

It’s always flattering when a man wants to become exclusive with you, and it gives your heart a little giddy flutter. However, be sure to give your relationship a little time to grow some roots.

Continue meeting new people each week and going on dates.

When you’ve seen his heart, mind and behavior demonstrated for some time and you feel he’s a wonderful man for you, then you can give his romantic request your “Yes!”

Senior Single Guys: How to Dress for First Date Success

What Not to Talk About On a First Date

How Long Should a Baby Boomer First Date Last?

How to Meet Active Senior Women