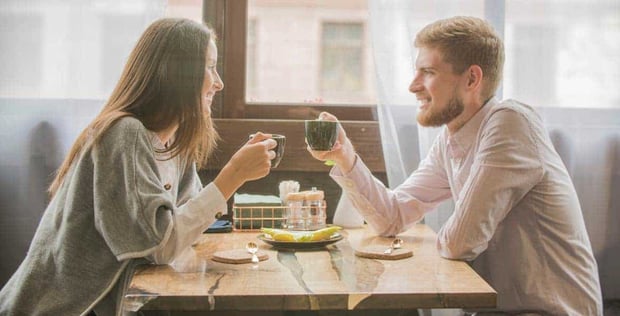 You’ve probably heard of liquid courage. Often the outcome is audacious declarations made when the filter preventing us from morphing into an idiot gets washed away with a glass or two of hooch.

There’s a similar boldness created through the anonymity of online dating, one I’ve labeled: Cyber Balls.

I experienced a new breed of man through online dating.

There was the guy who saw nothing wrong with sending email messages that read, “Nice breasts” or “Your hot. Let’s hook up.” That he used “your” instead of “you’re” was probably basis for deletion and the hookup? He had to be kidding.

Ignoring those types of messages was probably the prudent choice, but there was something about the brazenness that made my fingers itch. The senders were all hopped up on zero accountability — a byproduct of online dating.

It’s much easier to throw caution to the breeze when you’re “MisterBigStick” instead of “John from accounting.”

It was time consuming to send responses with the perfect balance of snark and shaming, and I quickly began to wonder, “Why bother?” Even if they apologized, I would never date them.

“Call out the fools who have contacted

you with presumptuous messages.”

I eventually came to the conclusion sometimes we need to do things for others that have no benefit to ourselves.

How does anyone learn appropriate versus inappropriate behavior? Someone tells them.

Maybe these men had confused online dating with catalog shopping. Perhaps they surmised that socially acceptable behavior in the real-world dating arena did not apply when electronically connected.

“Why waste time with pleasantries when we’re both single and here for the same thing, so meet me at 8, Caligrl70, and show me your tits.”

Cyber Balls is at epidemic proportions.

And it’s not limited to online dating.

If you want confirmation, read the comments section after any article posted online. I guarantee those commenters (hiding behind a username and avatar) wouldn’t dream of saying those things to the author’s face.

Nor would any of the men I experienced walk up to me in a bar and say, “What you number?” Yes, that was one message I received and I replied, “What you crazy?”

It felt good to give it back to those men and I’d highly recommend trying it. Do it for man or womankind, as the ladies are just as guilty as the guys.

Report the men who’ve sent you penis photos or ladies baring their double D’s. Send a message letting them know they’re busted. Then block them.

Call out the fools who have contacted you with presumptuous messages or dating profiles stating they want someone “athletic and toned” while they’re carrying around 20 extra pounds.

Perhaps they’ll disregard your words but maybe, just maybe, you’ll reach one person and he or she will grasp the negative impact their communication is having on their love life and adjust their online presence with the next man or woman.

I saw it as good dating karma to help someone else (yep, even a jerk) find love.

Given the reality of my situation as a single woman over 50 living in a city where women outnumber men, I needed all the good dating juju I could round up.

Melani Robinson is a writer, online dating expert and creator of the award-winning blog www.1yearofonlinedatingat50.com. She lives in New York City.

Do You Have the Balls for Online Dating?

How to Ignite a Love Connection on Social Media