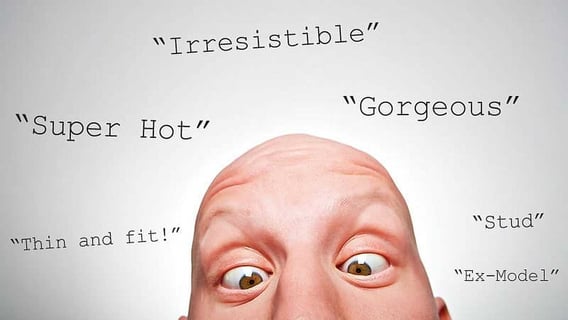 The other day I was talking to this guy online. Conversation was flowing great. He was very intelligent and had done all kinds of things. I was impressed.

He was former military, had an engineering degree, had traveled to all kinds of places, was taking a year off before starting grad school, used to be a paramedic — the list of stuff this guy had done was seemingly endless.

While he had great stories, I finally took pause to ask him, are you sure you’re only 30? He was taken aback and asked what made me think that. He went on to say that he was actually 34.

What had happened to me has often happened to you, too. People tell lies in online dating.

Here I break down the most common online dating lies that you can expect to experience.

Sometimes these correspond. Sometimes they don’t. When they don’t, you get people online who want to change their age. It’s often because they assume people their age are not a proper match, they don’t feel an attraction for people nearer to their actual age, or they feel their interests are better with someone of a different age.

How you catch an aging liar:

Unless you can imitate an Obama birther and demand to see a birth certificate, you may not realize you’re being duped.

Pictures can your biggest clue to this online dating lie. They either look old in the photo or their photo looks like the quality is from when you still had to shake your Polaroids.

The other way to tell is to test if their references are off. Ask them what they were doing when 9/11 went down. Then ask them where they were when Diana died. Compare if their life answers makes sense or if things just don’t add up.

Let’s face it. You go on a date and you’re worried whoever is there is not going to look like their pictures. You can stomach just about anything except this catfishing technique.

How to catch this catfish:

If pictures only include face shots or no CLEAR full-body shots, you’re probably being scammed about their body. This is the most common lie. You should also look to see if their pictures are all from the same angle/pose/selfie/position. Honest people show variety in their photos.

Daters often lie about their location because where they live is either undesirable or they don’t want to be known in their own town. They live in the suburbs or someplace where they have fewer options to date.

To diffuse this ruse:

Ask where they like to hang out or which gym they work out in. Where do they work, and how long is their commute? Simple questions will get complicated for them to try and maintain.

The other day my friend sent me a screenshot of a guy who openly admitted to being married and looking for something extramarital. He lived in Chicago and was searching in Sacramento.

It’s no big secret that married people are looking to meet someone online. More often they try to hide it, though.

How to eyeball the cheater:

Married people often hide their real location or have weird photos that don’t show them clearly, but they promise to email you more. While online, they may go invisible from the site often, and they make excuses about being high profile.

What they don’t want is to get caught by someone who knows them on a dating site. When in doubt, ask. You can do it straight out or flirty like “You seem like a great catch, and you’re not married?? Or are you? ;)”

Why lie? I got sent a research study that stated online daters largely do not want to intentionally deceive their online dating partners because they think such lies would quickly be discovered face-to-face, but we know people do lie.

Here’s the thing: Daters often don’t actively feel as though they are lying in their dating profiles. In their mind, they are presenting their best self. How someone sees themselves in their mind is the picture they try to portray for others to see, too, so they are basically just delusional.

Trust your spidey sense when you feel like something is off, and when in doubt, just ask.

Are there more lies people tell? You betcha. Hit me in the comments section to tell me how you were lied to online.

The Manti Te’o Story: How Can You Avoid Getting Duped Online?

The Most Important Part of Contacting Women Online

3 Simple Ways to Not Suck at Online Dating