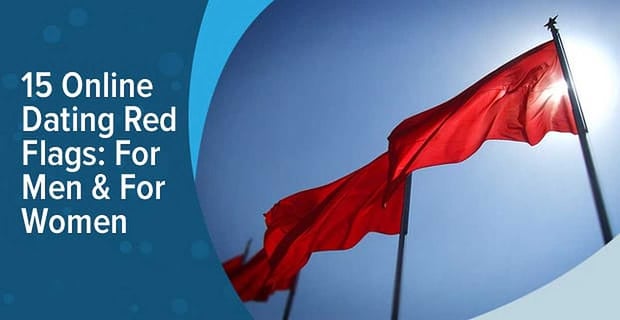 I remember watching this “Dr. Phil” episode one time about a guy who met a woman on a dating site with him who he really hit it off. Not long after, they were making plans to meet, but she was in another country and didn’t have the means to come to the U.S. to be with him. So, he decided to help — after all, he’d fallen hard for her.

For months, he’d send her money to use toward paying for her travel expenses, but something would always come up (it would get lost, there was another fee she’d forgotten about, etc.). Eventually, one of his friends asked Dr. Phil to see if he was being duped. Unfortunately, Dr. Phil’s team discovered that the woman didn’t actually exist and it was all part of an international scam.

Situations like this don’t have to happen if you know what signs to look for. Here are 15 red flags for online dating (which we’ve broken up for men and women) that can help keep you and your personal information safe.

For Men | For Women

Con artists target men differently than they target women, so below are seven red flags in online dating that men should be especially aware of.

1. She Asks for Money

As we saw from the story above, there are scammers out there who will try to get you to send them money, pretending to be a woman who’s in love with you and just needs a little help to come see you. If someone on a dating site asks you for money, report them to the customer service team immediately and then block them so they cannot contact you again. No matter what they say, do not give them your financial information or send them money — there’s never a good enough reason to do that.

2. She Says “My Friends Made Me Do This”

When a woman leads off her profile or a message with “my friends made me do this,” you can tell she’s not that into online dating. Maybe she thinks it’s desperate or whatever the case may be.

This tends to come off like a dispassionate statement, and the person should be excited about meeting new people such as yourself.

You want someone who’s excited to be meeting tons of new people, yourself included, and cares about finding a potential date, boyfriend, or husband.

3. She Has Tons of Photos But Little Information About Herself

You’re probably looking at a fake profile if she has all kinds of pictures (especially sexy ones) but doesn’t say anything about herself except for things like her name, age, and location. You need to know things about her interests, lifestyle habits, and things of that nature. There are tons of stock photos out there of pretty women, and it’s easy for anyone to obtain them.

4. She Only Has “Must-Haves” On Her Profile

While a dating profile pretty much has to say a person’s wants and needs (otherwise, what’s the point?), if a woman has a grocery list of items she’s looking for in a man, she may be asking for too much from one person. That’s not to say you shouldn’t give her a chance, but just keep an eye out. Try to look for people who value important characteristics, not superficial ones.

5. She’s Negative All the Time

We can all be Negative Nancys (or Negative Nathans!) from time to time. However, if she seems to be complaining about dating, work, friends, and her life more than sharing the qualities she can bring to a date or relationship or asking you about yourself — it’s time to take a pause and think about if she’s right for you. This is similar to how “my friends made me do this” is a somewhat pessimistic statement.

We’re all negative sometimes, but if the entire profile reads like one big complaint-fest, think twice about this person.

6. She’s Flaky About Meeting in Person

The ultimate goal of online dating is to find someone you like and meet them offline, right? When an online match keeps putting off the date, that’s cause for worry. Her excuses could definitely be genuine, but if it’s been weeks or months of you trying to meet her in person and she still hasn’t done it, you’ll probably want to ask her about it one last time and then move on.

7. She Seems Too Good to Be True

You don’t want to be too cynical, but at the end of the day, when someone says all the right things and has all the right qualities (or ones that are even better than what you could’ve dreamed up), just keep that in your mind and stay on your toes for anything that feels off to you. They’re called gut instincts for a reason, and it’s usually good to follow them.

Red flags of online dating can vary, depending on your preferences, the site you’re using, your age, your location, and things like that. We’ve compiled a list of eight that might apply to women more so than men.

8. His Profile Has Too Many Grammar & Spelling Mistakes

Most dating profiles are bound to have a few grammar and spelling errors in them, and that’s definitely OK. However, if almost every sentence has something wrong with it and you’re getting a funny feeling, listen to it. Either this person didn’t care about taking the time to make sure they were putting their best foot forward, or it could be a fraudster.

9. He’s Not Showing His Face in Photos

If he doesn’t have a picture that shows his entire face looking at the camera, he could be hiding something. Maybe he’s wearing a hat that’s tilted down over his eye, or maybe he’s looking over to the side.

There’s a time and a place for artsy photos, but an online dating profile isn’t one of them. You want to be able to see who the person actually is.

No matter what it is, a solution could be to send him a picture of yourself smiling directly into the camera, and then ask him to send one as well.

10. His Messages Seem to Be Copied & Pasted

The messaging part of online dating is so important. This is when you two get to determine if y’all want to take things offline or go your separate ways. If he’s sending you messages that sound generic and don’t mention anything specific from your profile, you’ve got to wonder if he’s sending it to every other girl. That’s not a good feeling. If he’s not willing to take the time to write a unique message, what else will he not take the time for?

11. He Gives You Too Many Superficial Compliments

Most of us like to be complimented and told we’re good at something or we look nice, but you can tell when someone is laying it on too thick and kissing your ass. When all a guy says is how you’re beautiful and funny and charming, it makes you question if he’s just a smooth talker, if you can ever get deeper conversations out of him, or if he might want something he’s not disclosing.

We all go through breakups, and we all heal from them in different ways and at different paces. If you broke up with someone who was one of the loves of your life, you’ll always remember them and will eventually discuss them with a new date or boyfriend. However, the first time you’re meeting someone (whether it’s on a dating site or not) isn’t the time to do it. If this is what one of your online matches is doing, we’d suggest being a little leery. You don’t want to have to worry about everything you do and if it’s going to remind him of what one of his former girlfriends did.

13. He Brags About Himself

This red flag isn’t for one-time offenders but for guys who just can’t seem to stop gloating about themselves and their accomplishments and everything else they do in life that’s amazing. We’ve all met people like this.

If an online match only talks about him or herself and never asks you any questions, that’s a bad sign.

14. He Frequently Talks About Sex

There’s absolutely nothing wrong with talking about sex — if it’s a two-way street. If that’s not what you’re looking for and he keeps directing the conversation that way, you should politely say you’re not interested and go find someone else.

15. He Goes a Long Time Without Communicating

When people really like someone, more than likely they’re going to respond to their messages, texts, and calls pretty quickly. On the other hand, when people aren’t really into someone, they tend to not be as eager to get back to them right away or have a back-and-forth conversation for too long. If he constantly goes days before responding to you, especially if you asked an important question, like when you want to go on a date, it’s not a good sign. Yes, he could be out of town or he’s lost his phone or something, but you should also consider the alternative. Look for patterns in his behavior, and then make your decision about cutting him loose or not.

Knowing These Red Flags Will Help Keep You Safe!

What happened to that guest on Dr. Phil was terrible, and no one should have to go through that. To keep something like this from happening to you or someone you know, remember these 15 online dating red flags. Online dating is the best way to meet a date or partner — you just have to keep your wits about you.

25 Problems With Online Dating & How to Solve Them

15 Statistics On Catfishing (And Ways To Avoid It)

Is BeNaughty.com Safe? 4 Reasons It Is