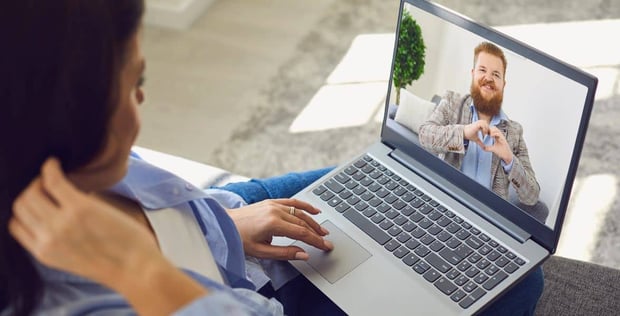 9 Ways to Spot Fake Dating Profiles: From Pictures to Messages

Analytical data abounds on the realities of online dating — and not all of it is good news. For example, 10% of dating profiles are fake, and over $50 million is lost every year from cons, according to the FBI, which receives thousands of romance scam complaints annually.

While these are some overwhelming statistics, there are steps you can take to ensure you or someone you know won’t be taken advantage of. We’ll show you how to tell if a dating profile is fake, whether you’re looking at the person’s photos, About Me section, or messages.

1. Are They From Another Country, Particularly Nigeria?

Seeking Arrangement and TC LogiQ, a background-screening company, reviewed 60,000 banned profiles to see what they have in common and found 28% were based in Nigeria, 23% in the Ukraine, and 21% in the Philippines.

We’re not saying every online dater from Nigeria, the Ukraine, the Philippines, or any other foreign country is a scammer, but you should keep an eye out, especially if international dating isn’t what you’re looking for.

2. Are There Empty Sections on Their Profile?

People who really want to meet someone special will put in the time and effort it takes to make their profile perfect. They won’t leave sections empty or skip a lot of questions.

If you come across a profile that’s mostly empty (except for their name, age, and location), it’s a sign that the person rushed to get it up and might want to get to the messaging part quickly so he or she can con someone.

3. Is the Text Filled With Grammar & Spelling Mistakes?

We’re not all professional writers and editors, so a couple of grammar errors and spelling mistakes is nothing to freak out over. However, if it happens a lot and you can tell that English isn’t the writer’s first language, it’s not nothing.

A study by Grammarly shows that just two mistakes means men are 14% less likely to get a response. That’s a crazy statistic, and you’d think that someone who genuinely cares about online dating would run their profile through a grammar tool, ask a friend to look at it, or at least look out for the red squiggle.

Photos on a dating profile are like eyes on a person — they’re the windows to the soul. When someone uploads just one photo or a couple that are basically all the same (e.g., headshots), you’re not learning anything about them.

Real people with real dating profiles will upload a variety of photos to showcase their personality and hobbies — but fake people with fake profiles don’t want to take the chance of getting caught by uploading too many stolen photos. It could raise a lot of questions.

Headshots, white backgrounds, a familiar face — could be a stock photo.

Stock photos normally have plain backgrounds (e.g., white) and people who seem just a little bit familiar (because you’ve seen them in other stock photos). It’s not hard to take photos from a stock photo site (or any other site, for that matter), so take advantage of resources like TinEye and Google’s reverse image search.

6. Are Their Messages Generic?

Time is the common denominator here — most scammers don’t want to put in hours on their profile or messages. So what you’ll end up getting is something that’s copied and pasted and that replaces your name with the last person they communicated with.

Be wary of a message that sounds like it could be meant for anyone.

Did they mention anything from your profile or photos? An interest, your job, anything? If your answer is no, that’s cause for an eyebrow raise. What happens when you ask them questions about their life? Do they always come back with general things like movies and spending time with friends? We all like doing that, so be on the lookout if they keep putting off details that make them unique.

7. Are There Discrepancies in Their Story?

Lying to someone online is easy because you’re not having to look them in the eye, but if you do it for long enough and to a lot of people, it’s going to catch up with you. If an online match is saying slightly different things about his or her life than what you remember, don’t make light of it. Suddenly they have a cat instead of a dog, their favorite food is pasta instead of tacos, or they’re the middle child instead of the older one.

Don’t ignore that funny feeling inside your gut. Go back to earlier messages to see what was originally said, and then ask them to clarify. If they start talking in circles, it’s no bueno.

Online dating scammers pretty much work around the clock, so they get really good at coming up with these sob stories that are hard to turn a blind eye to. You’ve got to fight the urge to help, even if you’re a big softy.

Whether it’s that they’re stuck in an abusive household or have extreme debt from hospital bills and just need some money for a flight to get to you, don’t give in to them. Offer up other resources that don’t involve your wallet, credit card, or bank account.

9. Do They Seem Too Perfect?

Not to be a Debbie Downer here, but if you think this person is too good to be true, they just might be. They’re tall, blonde, and blue-eyed (or whatever your preference is), they say all the right things, they have all the same interests, and their religious and political views perfectly align with yours.

Do they have a perfect appearance? Could be too good to be true.

Yes, it can happen, but that doesn’t mean you should let your guard down. They might’ve studied your profile enough to know exactly what to say and do to get you to fall for them. This would be a good time to ask someone you trust for their opinion on the situation. An outsider’s perspective can help.

With These Tips, You’ll Never Fall for a Fake Dating Profile!

It’s a shame that we have to write this article and that there are people out there who want to take advantage of those who are looking for love, but that’s the world we live in right now.

Dating websites do their best to keep their members safe (through verification systems, blocking and reporting features, etc.), but there’s a lot that you can do as well. If we all work together, eventually we can lower the number of fake profiles and the amount of money people lose to romance scams!