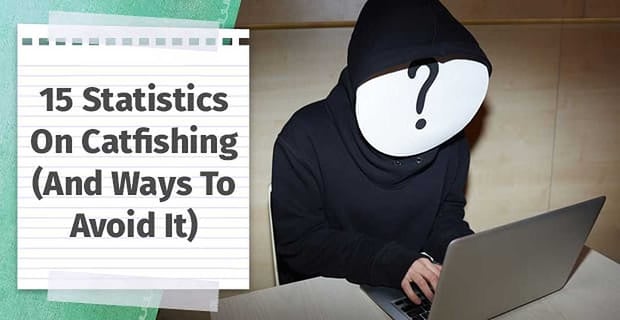 15 Statistics On Catfishing (And Ways To Avoid It)

One of my best friends is obsessed with the show “Catfish.” There are times when she’ll spend a whole Sunday watching episodes online, laughing about the harmless misunderstandings and getting teary-eyed about the serious heartbreaks (she’s a big-time crier). For those of us who haven’t experienced catfishing, it’s easy to enjoy the show and walk away without a care in the world when an episode is over. However, for those who have experienced catfishing, it’s a part of their lives that they’ll never forget.

Today, we want to share with everyone 15 catfishing statistics to shine a light on this ever-growing, deceptive activity. We also want to share some advice about how to make sure it doesn’t happen to you or your loved ones.

Statistics On Catfishing | Ways to Avoid It

Before you can protect yourself from a catfisher, you need to know the facts about them. Below are 11 stats (from studies, newspapers, magazines, nonprofit organizations, and dating sites, among other sources) that show just how prevalent these scams are.

1. Over 53% of Americans Fabricate Parts of Their Dating Profile

Psychology Today reports that, somewhat shockingly, one in two people exaggerate or lie on their dating profile. Sometimes in every section, and other times just in certain details. It could be as innocent as someone adding a few inches to their height, or it could be a scammer from across the world making up a sob story and hoping to get your money.

2. More Than Half of Online Daters Believe They’ve Seen Someone Else Present False Information in Their Profile

While more than half of online daters have lied about themselves, it looks like they’re also skeptical of other online daters. An article in Scientific American, a US-based magazine that covers developments in science and technology, says that 54% have seen a profile where they think the person lied. Call me crazy, but perhaps if we stop lying to each other, then we’d be more trusting?

An infographic created by FreeDating.co.uk shows that some of the most common reasons people catfish others is because they want revenge, they’re lonely, they’re curious about catfishing, or they’re bored with their lives.

From teenagers with nothing better to do to hackers looking to get into your bank account, catfishers come in all shapes and sizes. Just keep your eyes peeled and trust your instincts when you feel like something isn’t right.

4. Catfishers Are Commonly Compulsive Liars, Have Low Self-Esteem & Have Been Abused or Did the Abusing

That same FreeDating infographic also shows that catfishers tend to compulsively lie, are addicted to false persona and fantasy, feel unloved or unaccepted, may want to hurt other people, lack confidence, and have been abused or have abused someone else. Mental illness can play a role in some of these behaviors, and people often do bad things when they’ve been hurt (emotionally, psychologically, or physically).

5. Over 28% of Online Daters Have Been Contacted in a Way That Made Them Feel Harassed or Uncomfortable

A huge part of online dating is, obviously, the communication, but it’s not all flirty banter and date planning. Scientific American found that 28% of online daters have received a chat, email, or message that made them feel harassed or uncomfortable. For example, someone getting mad for not getting a response (or not getting the response they wanted), someone asking for money, or someone professing serious feelings very early on.

6. In Terms of Free Dating Sites, 10% of Accounts Are Scammers

We like free dating sites because they allow singles to try out the signup, searching, matching, and messaging processes without spending any money. Unfortunately, though, since there aren’t any financial barriers, that means it’s also easier for scammers to join and spoil everyone’s good time. According to Phactual.com, one in 10 profiles on a free dating site are fake.

Free dating sites are great because you can test everything out before fully committing, but just be aware of possible fakes, scammers, and frauds.

The good news is you can spot fake profiles pretty quickly because a lot of them won’t have photos. Also, most dating sites will let you know who’s a paying member and who’s not, so you can tell if your online crush is serious about finding a date or partner.

7. More Than 51% of Online Daters Are Already in a Relationship

That’s not all Phactual.com discovered. Another statistic is that over half of online daters already have a boyfriend/girlfriend or husband/wife — even though their profile and actions say that they’re single. For instance, 30% of Tinder users are married and 12% are in a relationship. In these cases, the catfisher would be someone who’s leading a double life and looking to cheat.

8. Women Are More Likely to Lie About Their Age

We mentioned earlier that a majority of people have admitted to lying on their dating profiles, and we’ve found what they tend to lie about varies based on gender. That same Psychology Today article says that women are more likely than men to lie about their age and appearance. These lies can come in the form of using a photo that was taken years ago or selecting a different body type than what they actually are (e.g., slender instead of curvy).

9. Men Are More Likely to Lie About Their Finances

It’s not just the women who are liars — men seem to have trouble with the truth as well. When it comes to their careers and financial situations, a lot of male online daters are dishonest.

In fact, 40% of men (versus 33% of women) have misrepresented their work position and salary. This particular study surveyed more than 1,000 online daters in the United States and the United Kingdom.

It’s not just dating sites that catfishers target — Facebook is another favorite. According to SocialNewsDaily.com:

Some other signs to look out for on Facebook include that the person is vague about their past, always seems to be traveling, and has had some sort of recent traumatic event happen in their personal life.

According to the Better Business Bureau, over 5,600 romance scam complaints were submitted to the FBI in 2011, with collective losses totaling more than $50 million. We expect that those numbers have only grown since then.

Now that we’ve given you all the stats, here’s how to avoid being catfished in the first place and what you should do if you think you’re in contact with a catfisher. These tips are simple and can be done immediately!

Google isn’t just for looking up funny cat videos — you can also find out if the person you’re talking to on a dating site is using someone else’s photo. It’ll only take you a couple of steps. Go to Google, click Images, click Search by Image, and then paste the URL where the photo can be found or upload the image. Google will show you if the image is anywhere else online.

If the photo doesn’t show up anywhere, you should be in the clear. Sometimes results will show social media profiles or other dating profiles. If your online match’s name and photo match up with the name and photos in the results, and if the profiles look filled out and legit, that should be OK. If, on the other hand, you see the photo coming from a stock photo depository or being used on another person’s Facebook profile or website, you should definitely be wary.

13. Look for Them On Social Media

Some people will tell you not to Google your online matches, but if they’re being weird and/or you suspect they’re lying, then you should definitely look them up. See if everything they’ve told you matches up with what’s on their social media profiles (Facebook, Twitter, Instagram, LinkedIn, etc.). You’ll also want to look for articles, comments, forum posts, mug shots, police reports, or anything else with their name in it, just in case there’s something fishy.

14. Ask to Skype or Meet in Person ASAP

In general with online dating, you want to try to meet your match in person as soon as possible — or at least exchange numbers and Skype info so you can text and call each other. Not only is this the best way to tell if there’s chemistry in real life, but it’s also the best way to see if they are who they say they are.

When an online match keeps putting off meeting on Skype or in real life, that’s cause for alarm.

If your online match keeps making up excuses for why they can’t call, text, Skype, or go on a date, then your Spidey senses should be tingling. This is particularly true if this has been going on for longer than a month.

If an online dater makes you uncomfortable even in the slightest, block them and report them to the dating site you’re on right away. If it’s something very serious, like they’ve threatened you or asked you for money, you should also report them to the FBI’s Internet Crime Complaint Center. Both of these actions will help prevent other online daters from having to go through what you went through.

Whenever You’re On a Dating Site, Keep These Online Catfish Statistics in Mind

MTV’s “Catfish” entertains millions of people like my friend. But we should also remember that these are real people with real feelings and real lives that are being messed with (and sometimes even ruined). Hopefully, this article has taught you a few things about catfishers’ behaviors and schemes, so you can keep yourself safe while on that journey to love.

3.5 Million AdultFriendFinder Users’ Kinks Leaked — Why You Should Care

25 Problems With Online Dating & How to Solve Them

How to Catch a Catfish Online: 17 Tell-Tale Signs & What to Do