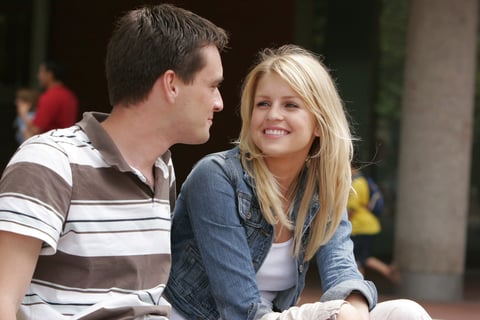 4 Ways for How to Get a Girl’s Attention

Getting the attention of a lady can be tricky. There’s a delicate balance between coming off as a suave, leading man type and giving off that “dude on the bus with soup-stained sweatpants” vibe.

Here are a few do’s and don’ts to keep you on the Harrison Ford from “Star Wars” end of the spectrum and away from Harrison Ford in “What Lies Beneath.”

1. Do put the friend in friendly.

Be talkative. Be engaging. Everyone wants to be the guy in the center of the circle making everyone laugh, but if that’s not your style, then don’t hide behind your bros. Moving around gives you a good opportunity to interact with a variety of people so you can zero in on who you’re really interested in.

If you have a hard time talking to new people, try asking them questions. People like to talk about themselves, so show off your listening skills.

This sounds absurd, but some guys think slowly isolating a woman away from the crowd is the best way to make a move. You are not a lion. Women are not impalas. Separating them from a herd is not a method of flirting. It’s super creepy.

Plus, if you ever watch Animal Planet, then you would know that this technique works best to pick off the elderly and weak. Going after a girl only to find out she has heart worms would be a total bummer.

“A lingering arm hold can give the

other person a good idea of your intentions.”

3. Do leave the couch for Oprah.

Poetry buffs and craft beer enthusiasts listen up: asking girls “thoughtful” questions comes across as creepy four times as often as it does sensitive.

Don’t ask a girl what makes her cry. Don’t ask a girl what she’s afraid of unless you’re expecting an answer like “sharks” or “whatever it is you’re doing.” It’s cool that you love Albert Camus and you probably have good intentions, but leave the weeping for daytime TV soft journalists.

We’ve covered not treating girls like prey animals, but don’t let that scare you off from a little touching. A lingering arm hold or a meaningful leg graze can give the other person a good idea of your intentions. Just make sure they’re reciprocating.

People naturally mimic the body language of someone they’re interested in, so watch to see if they’re playing back. If they’re backing away or staring off into space, take the hint to say goodnight with your dignity intact.

How to Initiate the Online Meet and Greet

How to Get a Girl to Ask for Your Number

How to Approach Women in Unusual Places