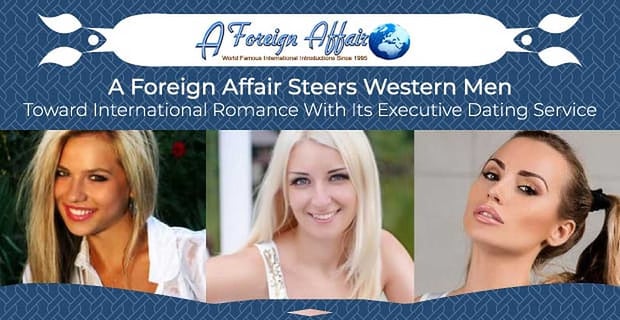 The Short Version: Building a relationship with someone overseas becomes much easier when you have a trusted dating service supporting you every step of the way. Over the last two decades, A Foreign Affair has provided thousands of singles with the resources to meet attractive dates in Eastern Europe, Latin America, and Asia. This international dating agency has run a hands-on service that gives men the best possible chance of finding romance in a foreign country. By organizing group tours and offering VIP consultations, A Foreign Affair has made distance a non-factor in the search for love and marriage.

International dating can get a bad rap in the industry. A few bad apples generate headlines and public outrage, which makes the entire system seem corrupt when it’s more of a mixed bag. Although many sketchy sites and services exist out there, singles can also find a fair share of well-intentioned teams trying to bring people from different backgrounds together.

Most people make assumptions about international dating services without looking into what the company does and how the system actually works. If they’d only dig a little deeper, they could be surprised by what they find.

A Foreign Affair has run over 500 singles tours in foreign countries since its founding in 1995.

Single men may want to take a closer look at A Foreign Affair, which is a longstanding international dating service with a transparent matchmaking process. Since 1995, this company has united thousands of singles and become a leader in transcontinental dating.

The hands-on team conducts European, Latin American, and Asian tours to facilitate introductions between Western men and local women. A Foreign Affair has over 300 affiliated offices around the world, so it definitely has the resources to connect relationship-minded singles with desirable dates in dozens of countries.

The company’s President, John Adams, told us international dating is slowly losing its stigma, and A Foreign Affair has seen its client base increase as a result.

“We’re getting more and more mainstream,” he said. “We see the stigma changing every day as the world continues to get smaller.”

In the last few years, A Foreign Affair has implemented a comprehensive Executive Plan that helps clients at every stage of the dating process, particularly in preparing singles for the dating journey ahead. This unique service gives singles everything they need to build confidence, find dates, and make a long-term match.

A Foreign Affair partners with professional dating coaches to provide image and wardrobe consultations to men seeking international romance. “It’s a dating tune up,” John explained. “Basically, we get him ready to go so he can actually be successful with everything we’re going to do for him as far as introductions.”

The team of dating experts takes the time to understand who their clients are and what they want. The goal is to ensure that person is mentally, emotionally, and physically prepared to meet women in another country and build authentic relationships. Then they put together photos, a dating profile, and a marketing package to show to women abroad. A personal consultant walks the client through the process and answers any questions or concerns along the way.

“With our service, you have someone who’s going through this whole dating process with you. They’re giving you a lot of advice.” — John Adams, President of A Foreign Affair

A Foreign Affair streamlines international dating by arranging about a dozen introductions, offering feedback, and providing translators. The team has decades of experience building relationships between people across vast distances and can help clients present themselves properly via letter, Skype, or in person.

By emphasizing dating readiness in the early stages of the process, A Foreign Affair puts clients in a position to take full advantage of the romantic opportunities to come.

“The Executive Plan is a very in-depth, very thorough, very personalized, very focused approach,” John said. “It’s not for the faint of heart because there’s a lot that goes on with this.”

Since the beginning, A Foreign Affair has led group tours that give men a chance to be pursued by beautiful women. In a recent event in Kiev, John told us the company had about 490 Ukrainian women competing to talk to 30 men. It was a confidence-boosting experience for the clients, many of whom had never been in that position before.

The group tours put clients in front of as many women as possible during a trip to Eastern Europe, Latin America, or other parts of the world. On average, clients meet 500 to 2,000 women in tours that last up to two weeks. The process isn’t as targeted or as personalized as the Executive Plan, but it does offer a time-efficient way to get into the international dating scene. Singles can join a group tour to take control of their love lives and meet attractive date prospects throughout the world.

A Foreign Affair takes a holistic approach to its dating services, endeavoring to help clients not only meet someone but feel better about themselves. It’s a lot of work, but it pays off when the client can show up on dates as the best version of himself.

“It helps in all aspects of life. It’s not just the dating part. It gives them more confidence. It makes them better business people because they feel more confident about themselves,” John said. “All the different things we work with them on helps them in so many ways.”

400+ Testimonials Prove the System Can Work

A Foreign Affair has received stellar feedback from former clients. Its success stories speak to the effectiveness of its matchmaking process.

Jeff and Olga fell in love while writing letters and enjoying lengthy phone conversations with one another. Meeting in person in Paris was just a confirmation of everything they felt. “We both spent the best week of our lives there,” said Jeff. “At the end of the trip, I asked her to marry me.” Today, the married couple live together in the US.

Another client, Trevor J., said he’d never received so much attention from around the world before. “I breaks my heart that I just can’t respond to them all,” he said.

“A Foreign Affair has not made any promises to me they have not kept.” — Michael, an AFA client

“Wow I loved the tours!” wrote Wayne in a positive review. “I want to go again. I learned so much and sincerely cherished the opportunity to meet so many wonderful women. I would gladly recommend AFA and their tours to my single buddy friends. If they are truly serious about finding a life mate, this is the way to go and the company to use.”

“AFA is the only company that lives up to its reputation as an international introduction agency,” said Gary. “It is not enough to collect millions of dollars from lonely men. A company must be positioned to actually help. AFA does exactly that.”

“The beautiful part of the Executive Plan is it doesn’t focus on geography,” John said. “Geography is no longer a boundary, so it doesn’t matter if she lives in Russia, Colombia, Peru, or China. We can find the best candidates in the world, no matter where they are.”

Bringing International Love Into the Mainstream

If you’re in a dating rut, it may be worthwhile to explore your options overseas. A Foreign Affair provides an exemplary international dating service rooted in personalization, accountability, and time-tested expertise. This company stands out from its less savory competitors by providing supportive services that help men understand what’s expected of them and how to get the relationship they want.

Since 1995, A Foreign Affair has endeavored to lower the barriers between international daters and encourage singles to fall in love across vast distances.

“The world is so small now, it just makes no sense to limit yourself to one city or one country when it comes to finding a match,” John said. “We’ve been saying that for 23 years now, and we’ll continue to do so.”