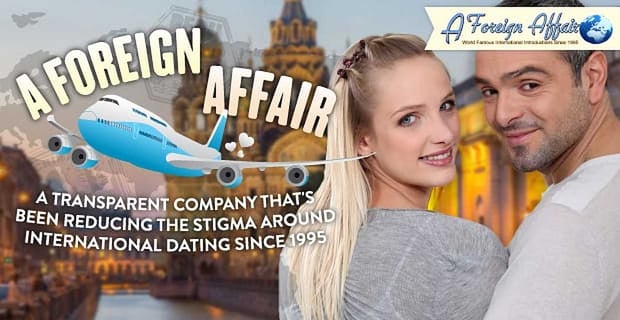 A Foreign Affair: A Transparent Company That’s Been Reducing the Stigma Around International Dating Since 1995

The Short Version: Connecting thousands of American men with foreign women from across the world — both in person and online — A Foreign Affair is “the #1 International Dating Agency.” Since 1995, A Foreign Affair has hosted more than 523 multiple-city tours in Europe, Asia, and Latin America and over 1,245 socials — which include unlimited introductions, champagne dinners, and personal interpreters. Not only is A Foreign Affair helping singles find their special someone abroad, but they’re also combating the stigma that often surrounds transcontinental dating.

International dating can be complicated for American men and foreign women who want to meet each other. Not to mention people can often make assumptions about those types of relationships.

But it doesn’t have to be this way thanks to A Foreign Affair, the premier international dating agency.

A Foreign Affair is the largest — and best — international dating service.

Since 1995, A Foreign Affair has hosted over 523 romance tours and more than 1,245 socials and has been responsible for thousands of dates, relationships, and marriages — bringing American men and foreign women together and dispelling common stereotypes associated with international dating.

We were interested in hearing more about the history of A Foreign Affair and its popular events, so we reached out to President John Adams to learn more. He also shared with us his insights about the controversy that tends to surround this topic.

Founded by John, Ken Agee, and Ron Redburn, A Foreign Affair’s core component is its comprehensive tours and fun socials held during those tours. With numerous events to pick from and 24/7 guidance, A Foreign Affair is there every step of the way and makes sure every client’s individual needs are met.

“With us, it’s always been our goal to try to put the two people together to see where the chemistry and the connection is going to be,” John said.

A Foreign Affair hosts over 75 romance tours a year and categorizes them by:

Ranging between $795 to $5,300, tours can be for individuals or in groups, last 5 days to as many as 14 days, and include up to 4 different international cities.

Each tour includes 2-6 socials, depending on which one is chosen, as well as:

A Foreign Affair even provides airline quotes and services to help members obtain passports and Visas before and after the trip.

It’s free to join A Foreign Affair and search through thousands of profiles (by nationality, age, etc.). But the way to go is the Platinum Membership — which gives members access to useful features like being able to write, call, email, and send gifts to people of interest.

A Foreign Affair also understands that it can be difficult to travel half way around the world into the unknown, which is why they hold regular phone, video, and in-person sessions. This way, members are prepared, their expectations are in line, and they have the best chance at success.

Then it just comes down to members finding someone who catches their eye, choosing a tour so they can meet, and booking travel arrangements. The staff will be waiting at the location when they arrive and host an orientation that evening to get everyone settled.

The next several days are a whirlwind of exciting socials and one-on-one dates. The socials include food, drinks, and music, making it easy for attendees to relax and mingle. A Foreign Affair will help make introductions, exchange contact info, and set up the dates — where singles could go on 3-5 in just one day (from a casual morning of coffee to an extravagant night at the opera).

Members Find Their Complements — Whether Like-Minded or Opposite

Ranging in ages from 21 all the way up to 91 and careers from doctors to accountants, A Foreign Affair’s male clientele is very diverse.

“I can’t thank all of you enough for everything that you have done for me. This experience has been incredible! I went to Poltava Ukraine, and within an hour of arriving at the office, I was already on my first date. I have met an amazing woman, Natalia!” — Kyle Z., Wisconsin

In terms of the women, a majority are in their late 20s and A Foreign Affair personally interviews each one before they join.

But what these American men and foreign women have in common is they truly want to find someone special to spend their life with.

John added that it’s also not a competitive atmosphere like one might assume — these singles are simply looking for a like-minded match and want to help the others do the same.

“They’re creating this bond and this kinship, and they’re helping each other throughout the tour,” he said.

Over the past two decades, A Foreign Affair has led to thousands of dates, relationships, engagements, and marriages. John, Ken, and Ron — as well as numerous employees — have met their wives or husbands through the company.

Yet no matter how many people A Foreign Affair helps, there’s still unfair stigma attached to this type of dating, John said.

“I’m married to a Russian woman, Tanya. We’ve been married almost 20 years now and still get some sideways glances from people because it’s different,” he said. “When you do something a little bit different, people will look at you funny, but I don’t care. I only get one life.”

Responsible for thousands of relationships, A Foreign Affair works to combat negative stereotypes.

To combat these stereotypes and challenge people to re-evaluate their opinions of international dating is, A Foreign Affair doesn’t fight with just words; they fight with transparency and honesty — even inviting the media to go on tours to see how they really are.

They also fight with action — holding call-in forums on Mondays where members can share their experiences and offering expert insights on Thursdays from leading dating coach Renee Piane.

“We open ourselves to this level of scrutiny because we believe in what we do. We’re trying to illuminate what really goes on here,” John said. “There’s going to be good, bad, and ugly, and we talk about that a lot on our site. And we do a lot to try to educate.”

Whether it’s their unique online features or extensive tours, A Foreign Affair is having a positive impact on the lives of American men and international women. And by consistently being upfront, A Foreign Affair is also transforming the international dating industry and the way people perceive it — which is something they’ll continue to do for the next two decades and beyond.