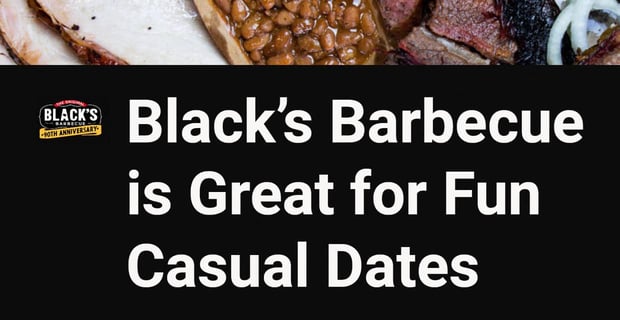 The Original Black’s Barbecue Offers a Fun, Casual Atmosphere for a Date

The Short Version: Instead of going to the usual restaurant for steak or salmon, switch things up with your partner and eat at Black’s BBQ to add more spontaneity to your relationship. Black’s Barbecue offers amazing food and a fun and casual atmosphere for couples to engage with each other. Skip the formal dinner where you have to worry about how you dress and go to Black’s BBQ where you never have to worry about who’s watching you. Black’s BBQ provides couples with an experience worth putting the utensils down and getting their hands dirty.

Over 75% of adults in the United States own a grill, according to Forbes. The article also stated that Memorial Day and the Fourth of July are some of the biggest turnouts for BBQ food. That just goes to show that Americans love their BBQ.

Taking your date to get some BBQ is always a good idea. Bonding over great food can lead to great conversations and good vibes. BBQ is comfort food to the next level. Date night doesn’t always have to include a 5-star menu, a slab of ribs can do just fine!

Located in Texas, Black’s BBQ holds its cooking and customers in high regard. Couples will be accommodated as Black’s BBQ ensures there is not a long wait for visitors and that they receive seats that complement their wishes.

“The seating inside was really open as well, so it wasn’t tough to find a seat,” said Thomas J., a visitor to Black’s BBQ.

Mouthwatering Meals With All the Fixins

Black’s BBQ’s menu will leave visitors wanting more. One thing you can never go wrong with is the taste of BBQ. Whether it’s a memory from a family event or a celebration, there’s something about the smell of seasoned food over a hot grill that makes you feel at home. Black’s BBQ menu is tailored to true BBQ fans who have an appreciation for smokey taste and strong Southern seasoning. Black’s BBQ has a well-rounded menu for all visitors to enjoy. Guests can choose from ribs to smoked turkey breast, beef brisket, and smoked chicken.

“We tried some lean brisket, fatty brisket, a beef rib that was HUGE, and some pork ribs and all of it was excellent! The beef rib was moist and very flavorful! Their jalapeños were nice! This location was a lot better than what we experienced at Lockhart,” said J.E. in a TripAdvisor review of Black’s BBQ.

Black’s BBQ is an establishment made for people with varying tastes and styles. The entrees are eye candy of BBQ-style food that we all know and love, but the sides are just as alluring too. They have an array of complementary dishes such as potato salad, coleslaw, green beans, mashed potatoes, and of course so many more enriching BBQ-style plates.

Couples will feel like it’s a national holiday anytime they visit. But don’t just take my word for it, Black’s BBQ has a myriad of reviews from people who not only loved their experience there but cannot wait to go back.

“This is by far the best barbecue I’ve ever had!” said Michaela C. on Yelp. “I have been to several states around the country and have tried their pork as well as beef ribs, and nothing compares to the succulent juices that came out of each savory bite at Black’s BBQ. I just wanted to admire the glistening highlights of each piece of meat I ate.”

Behind every plate of food is a chef with a dream. Black’s BBQ has a depth of history and culture in its roots which shows a true love for catering to the people. The story of Black’s BBQ starts in 1932 when the business was originally a meat market; that is until Edgar Black Jr. changed that dynamic.

Edgar Black had a vision for more than just selling meat to the public; he wanted to revolutionize his family business and make it a place to remember for people visiting Texas. Now it’s a booming restaurant that has over five generations of pitmasters who have served delicious food.

“The hype of Texas bbq didn’t yet exist, still, our family remained steadfast in serving best-in-its-class bbq, and it has brought us where we are today,” said the Black’s BBQ team.

The years of service that Black’s BBQ has contributed to its customers show how the team cares for its food and customers. The heads of the restaurant chain know where their true value comes from and it’s not just the food but rather the people they give an experience to.

The passion they put into making sure couples have a venue to enjoy the food Texas is known for is undeniable. Black’s BBQ is dedicated to the future of its business, as the owners are teaching the new generation of family traditions of cooking and serving the people.

After every visit, you can also carry home some of Black’s BBQ with you, and I’m not just talking about the food. Black’s BBQ offers store merchandise the restaurant can ship out. That includes multiple bundles of personalized brand apparel for you and your partner to enjoy at home. Along with that, Black’s BBQ also distributes its sauces, rubs, and seasonings so you can be a pitmaster at home.

Black’s Barbecue Is Slow Cooked Just For You

Black’s BBQ is more than just a restaurant, it’s an open space for visitors to enjoy the Black family’s culture and traditions. When you visit Black’s BBQ, you become a part of something bigger. It’s hard to find a good place to eat, but finding a place that has generations of workers dedicated to helping the public is surely something special.

Black’s BBQ is dedicated to customer service on a grand scale. Couples don’t have to stress if the local venue is packed, four locations in Texas have the same serving menu. Black’s BBQ is an establishment that puts its clients’ needs first. The restaurant ensures that its clients enter a venue that allows them to feel the essence of Texas and the freedom that comes with it.

If you and your partner are not living in Texas don’t worry, Black’s BBQ offers seasonal events where they travel to different cities and cater for major concerts or city festivals. Do you have an event coming up and need some tasty food to accommodate your guests? Black’s BBQ offers catering services and are willing to work within your budget to help add an exciting touch to your event. And you can feed more than several thousand, so everyone will get a tasty plate!

“Blacks was everything it was touted to be. Quintessential Texas bbq, replete with gorgeous, crispy bark, soft processed bread slices, and dill chip pickles,” said Jonathan R. One sauce can be doctored up with their bottled hot sauces like Chipotle mustard and ghost pepper. My favorite item of the meats was the “lean” brisket.”