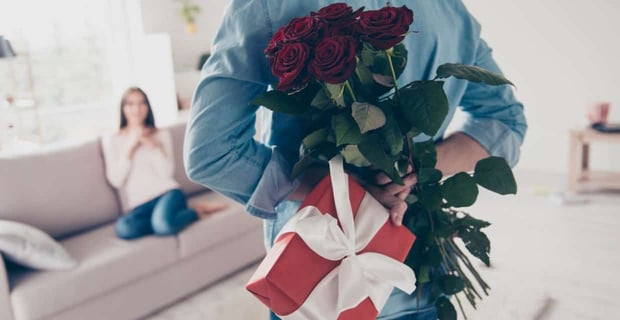 Don’t come crashing down to earth by trying to buy her affections. And yes, I know you’ve heard a ton of dating advice that tells you to give her presents, flowers, candy, and other things to show your romantic side.

If you buy into that nonsense, you will short circuit the magic. Here’s why:

To help you understand this, let’s review what you have done early on, and this holds true for many of the cases. To put it simply, you’ve likely risked rejection at many different stages of the dating process.

All of that is okay. In THE SYSTEM/DATING DICTIONARY, I teach single men to be a gentleman. A gentleman treats women with respect so that earns her good opinion, and that’s what you will do when you follow my materials.

Being a Respectful Date Is Gift Enough in Itself

At every stage, you could be rejected by her — and that’s okay too. I tell guys to never take any rejection personally. Never mistakenly believe that a particular woman is the only woman for you. Get comfortable with the word NEXT if something goes haywire with the current lady in your life.

Don’t you think all of that courting is enough?  All those points at which you could be rejected, and yet you show up with a smile intending for her (and you) to have fun as you treat her with respect.

A great lady will appreciate all that. She will be into you because of who you are. You don’t have to then buy her affection with all sorts of gifts.

It’s a turnoff to a great lady. Yes, perhaps a superficial person (also known as a gold digger) would love a ton of gifts, but then her affection and admiration isn’t about you. She’s just looking to burn your Visa Card away. The real-deal woman who really likes you and wants to get to know you is not going to respond positively to gifts early on.

Because it’s too soon. She knows she hasn’t earned a gift, just like you haven’t earned anything from her.  Just because you’ve had a few laughs and a couple nice dates doesn’t mean she should get flowers, candy, let alone more expensive gifts.

Guys who are new to my materials may balk at this point and protest that, if she likes you, then wouldn’t she like you more if you are giving her gifts on top of fun dates?  Unfortunately that’s the brainwashing that many believe, but it’s not true. Yes, give her gifts and attention once she’s your girlfriend. And of course give her gifts if she’s your fiance or wife – because it has meaning then.

If you give a gift too early then it looks like you are being manipulative. It won’t feel personal or special. She’ll think you must do this with every woman you are dating. She’ll feel like you’re trying to give her a bribe to go out with you. That’s how a great lady is going to perceive it.

Let’s reverse it:  What if you started getting gifts from people? It could be from potential romantic partners or even new friends or coworkers. The common theme is you don’t know them, and they don’t know you. But they start lavishing you with gifts.

Isn’t that going to cause you to question where their motives are?  Wouldn’t you have a mindset that says: “Hey, they don’t know me, what have I done to earn this?  What is up with this?”

Your potential Ms. Right is going to think the same thing.

Save the Gifts for Later in the Relationship

Hey, man, it’s enough you are risking rejection, planning great dates, and treating her with respect for those early dating days. Just focus on having fun – and keep doing that until she’s your girlfriend after 10-12 dates. I teach guys that you need two or three months of great dates before you can even consider her to be a girlfriend candidate. Some single guys rush in too fast. You have to really slow down and get to know her over time… but that’s another column for another time.

Remember guys, if lavishing her with gifts worked for the long haul, then millionaires and billionaires would never get divorced, and guys of more modest means would never have 30+ year relationships with wonderful women. Think about that before you’re tempted to get a bouquet of flowers you can barely carry for date number five.

Doc Love coached men for over 30 years after interviewing thousands of women in his lifetime asking them why they chose one man versus another. What Doc learned directly from women he then taught to men. Doc was a prolific writer and created a lot of timeless dating content for his team to continue sharing his message. Singles can also get additional coaching via his still active blog and podcast at www.doclove.com/blog and www.datingwomenpodcast.com. For more tips visit his official site www.doclove.com.

What to Do When You Have Nothing in Common

7 Things I Learned About Dating in High School

How to Be Interesting to Women

How Do You Make a Girl Go Crazy About You?