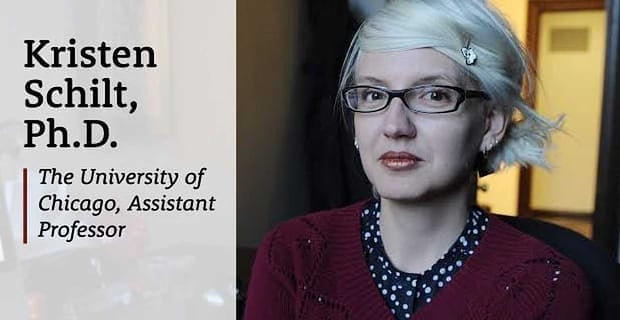 TL;DR: Few people have dedicated as much time to examining the persistence of gender inequality in the U.S. as Dr. Kristen Schilt, an assistant professor at the University of Chicago.

Going on her eighth year at the University of Chicago, Dr. Kristen Schilt’s research has covered a broad spectrum, but perhaps her most compelling work comes in the form of shedding light on cultural assumptions about gender and sexuality that normalize and reproduce social inequality.

“I’ve always been very interested in gender inequality and thinking through how to address that and make social change, and sociology was the first academic discipline that I saw as providing a way to do that,” she said. “I’m interested in the persistence of ideas that women are not as smart as men or femininity is devalued compared to masculinity and maleness.”

How do we “do” gender, and how do we determine gender?

Dr. Kristen Schilt, associate professor at the University of Chicago

“We looked at when people are opposed to transgender people entering these sex-segregated spaces, what are the arguments they use? What can we learn from this larger cultural opposition?” Schilt said.

Using a content analysis of newspaper discourse, such as statements like, “How do I really know who’s going into the women’s restroom?” Schilt and Westbrook were able to better understand people’s beliefs about what makes someone a man or a woman.

“When we looked at the sports case compared to the bathroom case, there’s been much more success in quieting cultural fears about transgender people on sports teams, and that’s largely because there are policies in place that require that if transgender people are going to participate on sports teams that are gender segregated, they have to follow very specific rules about what their bodies can look like and what kinds of hormones they have to take,” Schilt said.

According to Schilt and Westbrook, having policies like these puts people who are opposed to incorporating transgender men and women into sex-segregated spaces at ease, but when there is a lack of policies, they tend to become anxious.

Schilt and Westbrook’s main argument is that criteria like this puts regulations on what kinds of bodies are considered acceptable.

“It also creates a huge financial burden. Hormones and surgeries can be a financial burden to people,” Schilt said. “A lot of it [the study] is about shifting ideas about gender and sexuality and the people who oppose that, who want to stay anchored to ‘No, there’s men and women only. Men have to have certain kinds of bodies. Women have to have certain kinds of bodies, and we need to regulate that.'”

Opposition as a way to get social change

While Schilt is in the early stages of conducting a follow-up study that looks more closely at the opposition of transgender children in school, the overall impact she wants to make with her research is to educate and start a conversation, particularly at the policy-making level.

“Certainly I hope people making those kinds of policies think it through but also just giving people a larger understanding of what is behind this opposition, so when people say ‘I don’t want transgender people to use my bathroom,’ what does that mean for people and how do we explain this in a moment where there is a big shift?” she said. “The acceptance of transgender people is shifting broadly in society, which is great, but because of this shift, you start to see the anxieties of the people who want things to stay the same.”

To learn more about Dr. Kristen Schilt and her innovative work, visit uchicago.edu.