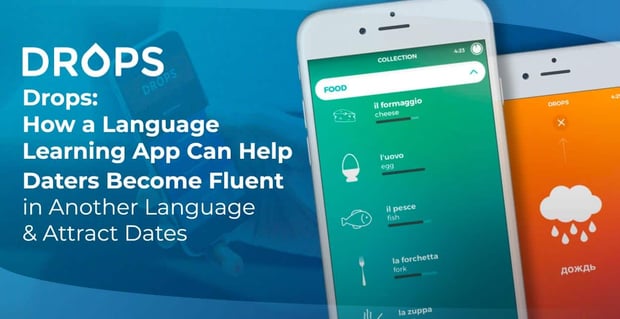 Drops: How a Language Learning App Can Help Daters Become Fluent in Another Language & Attract Dates

The Short Version: Learning a new language takes commitment and brainpower, which can be two attractive qualities for singles to possess. You can impress multilingual dates by downloading the Drops app and expanding your vocabulary in 33 languages. That’s a lot of different ways to say “I love you.” Launched in 2015, Drops has turned learning another language into a fun game and thus given citizens of the world an easy way to better understand and communicate with one another.

After I graduated college, I took a two-month vacation and lived in a friend’s spare room in Spain. The trip gave me a chance to clear my head and explore a foreign country for the first time. The only problem was my Spanish was no bueno.

One night, we were enjoying tapas at a bar when we got to chatting with a group of guys at the next table. That is, my friend got to chatting. I struggled to keep up with the conversation and could only chime in with my go-to Spanish phrases, which include witticisms such as “I like the food here.”

Drops gives its users a unique and fun way to learn another language.

One of the guys noticed me struggling and smiled. “We can talk in English, if you prefer,” he said with barely any accent. I couldn’t help but laugh in relief, and we ended up having a great conversation. He’d gone to college in the States, he told me, and his English skills made me feel at home.

A language barrier can stand in the way of a romantic connection, but all it takes is a few well-placed words to bridge that gap.

The Drops language learning app can help daters find the words to woo that special someone. This engaging app delivers vocabulary lessons in a beautifully visual way that feels more like a game than an exam. Its original interface has turned many heads, and Drops has become one of the world’s leading language learning solutions since its launch in 2015.

If you want to become fluent in a foreign language, you can start with the basics and build your knowledge one word at a time thanks to Drops.

“Most people who want to learn a new language fail because they jump in the linguistic deep end and quickly become overwhelmed,” said Daniel Farkas, Drops CEO and Co-Founder. “With Drops, you ease into language learning, and before you know it, you have the comprehension, confidence, and commitment to continue. We call these the three Cs, and we believe they are essential to language learning.”

The Game Has Vocabulary Words in More Than 30 Languages

Drops is a fun, interactive app that makes learning another language easy on the brain. You can download the app for free and start your educational journey immediately.

Simply choose a language — the app includes 33 languages ranging from Arabic to Vietnamese — and a category to start going through vocabulary words. The app differentiates between certain dialects, so you can specify if you’re interested in learning Latin-American Spanish or British English, for instance. This helps travelers pick up localized phrases and euphemisms in a straightforward and intuitive way.

Drops tests your knowledge by asking you to spell a word or match it with the correct picture.

The Drops app drops words on the screen one at a time, and users can drag the word to a picture of the definition. The game helps users get accustomed to the sight and sound of new vocabulary. This educational process is similar to going over flashcards with a friend — but it’s a lot more fun and fast-paced.

As a free user, you can spend up to five minutes flipping through vocabulary words on Drops. Paid subscribers have unlimited access to these brain-teasing language games.

Drops highlights everyday vocabulary and organizes words into categories so users can focus on the areas that will be most helpful to them. If you want to be able to order food at a French restaurant, you can browse sections for food, fruits, vegetables, drinks, herbs, snacks, and, of course, pastries. If you have a business meeting in Tokyo, you can look through business and tech terms.

The Drops app possesses a wealth of knowledge across many different fields and interests, so language lovers will never be at a loss for words.

You can add words to your Drops memory bank by browsing categories ranging from society and politics to home and garden. Drops uses frequent repetition to facilitate learning and retaining new words. Once you feel confident that you know a word by heart, you can swipe up to hide it, and that word won’t come up again.

In 2019, Drops partnered with Global Eagle Inc. to add a new Travel Talk section, which includes essential words and phrases you need to get around as a traveler in a foreign country. The list includes things like “Can you take my photo?” and “Where’s the bathroom?”

Having Drops as a language wingman is a great idea if you have a foreign trip coming up, or if you have a crush on someone who’s multilingual.

“Language is a huge connector,” Daniel said. “Whether you are a frequent traveler, want to brush up on a language, or just want the basics to impress your significant other’s family — speaking multiple languages is not only sexy, but it shows a curiosity and interest in the larger world. That’s always attractive.”

The Drops app is a passion project dreamed up by Daniel Farkas and Mark Szulyovsky. Both were passionate about education and language in their own way. Mark had used cognitive theory to create a mobile game called ThinkInvisible, and Daniel had written a self-help ebook that taught readers 2,000 of the most commonly used words in a new language.

“The Drops founding story is one typical of both the startup and the dating world,” Daniel said. “Two entrepreneurs who have like-minded interests are introduced to each other at a party. They hit it off immediately.”

Daniel and Mark wanted to create an app that would teach language in a fun and effective way. They wanted it to feel more like playing a game than sitting in a classroom.

Drops became a game-changing language tool with the ability to keep users focused and entertained as they learn new words.

Today, Drops is operated by a highly curious and motivated team based around the world. The team includes coding experts, language aficionados, and other creative types, including Shannon Kennedy, a polyglot and musician who has appeared as a saxophonist on “Jimmy Kimmel Live!” and speaks nine languages.

“We’re a completely remote company with no offices whatsoever,” Daniel said. “This enables us to hire the best talent in the world, wherever they may be.”

Every three months, the Drops team gathers for company outings to “Drop-sites” in cities around the world. In the last two quarters, they have visited Budapest and Reykjavik. The Drops team’s passion for travel and language spurs it to create better tools for users who share that sense of wanderlust.

The Drops team took the idea of gamifying language learning and ran with it. Recently, the team released Scripts, an app that teaches users to write in another language. The app’s well-crafted visual format guides users to make sense of five complex alphabets and character-based writing systems.

Reviewers on iTunes Give the App 4.8 Stars

Drops has received praise from many media outlets since its launch. The app was featured in EdTech Digest as a top language learning solution, and it ranked ninth in Fast Company’s Most Innovative Education Company list. Google also honored Drops by naming it the Best App of 2018.

“Drops is great for a daily dose of vocabulary,” according to the Editor’s Choice section of Google Play. “Explore lessons on a broad range of topics — from pastries to pets to politics.”

Many users are fans of the app as well. After over 180,000 star ratings, Drops currently has an average rating of 4.8 stars on iTunes and 4.7 stars on Google Play.

“I’ve tried many different apps, websites, books, audio books, and lessons to try and learn a second language,” said Kiralee Doyle in a review. “In only one week, this app has progressed my skills further than anything else I’ve tried and made me enjoy the lessons too. It is incredible, particularly if you are a visual learner.”

Daniel said the Drops team frequently hears from users who say they’ve used the app to learn the first language of a boyfriend, girlfriend, or spouse. The app can help them make a good impression on family members and show that special someone that they care. Taking the time to learn someone’s first language can be a touching way to grow closer and express what’s in your heart.

The thank-you messages and review from Drops users are important to the team because it gives them a direction for improvement and growth. For instance, a woman wrote to Drops asking if they would add Bengali to the app because she had fallen in love with someone who spoke that language. The Drops team takes such recommendations seriously and is always open to adding more languages to meet the needs and aspirations of its loyal users.

“I find it very addictive, just want to learn more,” said GD in a review. “Would love it if it was possible to get Irish language lessons on the app soon as well. Always wanted to learn Irish.”

The Drops team answered the review, “Keep playing and let us know if there’s anything you would suggest us to improve on!”

Drops Can Teach Travelers the Words for Friendship and Romance

You can open the door to new relationships with the right words at your disposal. My Spanish-speaking skills may not have been top-notch, but I was fortunate during my stay in Spain to meet some kindhearted, multilingual people who could meet me in the middle and speak my native tongue well enough for us to reach an understanding. We didn’t have to be fluent in each other’s languages because a few words and gestures can go a long way.

The Drops app can give people the words they need to express themselves in a foreign language. The more you use the app, the larger your vocabulary will become. Whether you’re single or in a relationship, you can use the Drops app to deepen your relationships and send a romantic message to someone who speaks another language.

By becoming multilingual, you can impress potential love interests and create connections across cultures and borders.

“What’s cool about Drops is that we are equally effective for frequent travelers, casual language learners, or people who are fluent but could use a quick refresher,” Daniel said. “We want to be a go-to tool for every type of learner.”