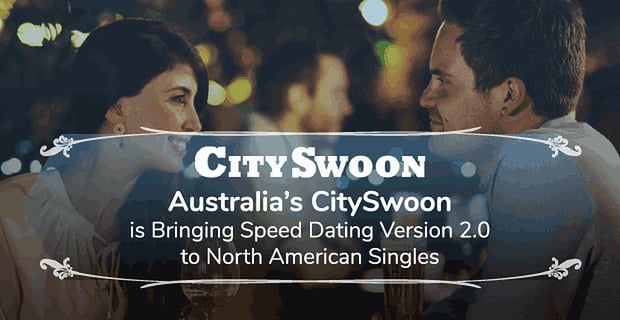 Short version: Brett Couston and Louise O’Connor noticed the ways that technology was disrupting traditional dating, but one popular method had still been left in the dust: speed dating. So the married couple used their expertise to create CitySwoon, which holds modern speed dating events that pair compatible matches in real time. CitySwoon’s large-scale speed dating events deploy technology while still allowing couples to test out their chemistry face to face. The company’s first event broke a world record for the largest speed dating event ever orchestrated. CitySwoon, founded in Australia, has also rolled out events in the United States and has plans to expand to Canada.

We’ve all heard the dating adage, “There are always more fish in the sea.” But what if that sea was filled with 700 fish, all swimming around the Sydney Opera House?

That scenario was orchestrated for the grand opening of CitySwoon, an Australian company that aims to revolutionize speed dating.

“We launched the company with a Guinness Book of World Records-breaking event in Sydney,” said CitySwoon Co-Founder Brett Couston. “We had 700 people there, and we used software to match people. What we did was create a live-matching software for speed dating.”

Brett founded the company with his wife Louise O’Connor, a software developer with 20 years of experience. Using his background in finance, Brett organized and publicized the company while Louise developed a complex matchmaking software that pairs couples in real time.

“At first, we had this pretty average dating website,” Brett said. “But then we thought, ‘Let’s do something with this matching software my wife developed.’ So we looked at speed dating because nothing had changed in speed dating in a while.”

Building on the momentum of such a successful opening event, CitySwoon continues to evolve its pairing software. The company aims to disrupt the idea that singles at speed dating events must talk to everyone. Some singles will never be compatible, and the situation itself — being trapped across from someone for a predetermined period — can be uncomfortable.

“The software presents photos of your matches at the speed dating event, and we’ve got a matching filter deployed. So the people you meet are more targeted,” Brett said.

Brett said he believes CitySwoon’s large-scale dating events are turning the traditional model on its head.

“Seated speed dating feels confrontational, like a job interview,” he said. “Our format allows users to date where they want to date, on a couch, or bar, or rooftop. After an event finishes up, we find that most people stick around. It creates a nice social environment.”

Believing Daters are Better in Person, Not on Apps

CitySwoon attracts a demographic of daters who have either lost interest in dating apps or don’t have time to keep up with the demands of other platforms.

“The average age is early 30s. Our user base is mostly city professionals and people with college degrees who are too busy to be on dating apps all the time,” Brett said. “Our events create a nice way for people to get offline.”

“It’s a small percentage of people who are looking for a casual thing,” Brett said. “We have fewer and higher-quality events because we want people motivated to find one another. It’s not about volume. Only a few people are just there to hook up.”

CitySwoon’s events rely on technology, but that is where the similarity with online dating platforms ends.

“Our events aren’t like online dating at all,” said Brett. “If we have 100 people at an event, the software will split those people up into 50 pairs based on their preferences.”

Dating apps, of course, make users do most of the work.

Further, CitySwoon events don’t include the drudgery of sifting through the same group of singles, over and over.

“The platform remembers who dated who, so there are no duplicates,” Brett said. “It remembers both at the current event and at future events. That’s a key piece of what we do. No one wants to come back and talk to the same people again.”

With so much drudgery involved in online dating — from messaging to setting up dates — singles can quickly grow tired of the scene. That’s why CitySwoon created adventure dating.

“We’ve created a new way of dating, called adventure dating, where people find out where they’re going to meet on that day,” Brett said. “We’ll send them a message saying, ‘Your first date begins at this bar.’ And we might have three or four starting venues.”

But the dates don’t stop with the first bar. Instead, the adventure moves to various locations.

Once speed dating events are done, singles can keep the conversation going at after-parties.

“The groups will turn out and individuals are introduced to various dates on various rounds of speed dating,” said Brett. “We can move them around to different bars, or bring the whole group to a party venue at the end. We can have whole groups gathering together for a finale.”

Ultimately, though, CitySwoon consistently receives feedback that the speed dating events provide singles more excitement than the same boring night at home scrolling on their smartphones.

“People tell us our experience is different,” Brett said. “They tell us they like having a night out, not sitting in front of an app. Sparks are flying at every event.”

Brett and Louise built CitySwoon as an alternative to the oversaturation of dating apps, and users find its modern take on speed dating refreshing.

“Apps are convenient, but you still have to spend all that time using them. But when you attend our events, you’ll find a lot of motivated singles,” Brett said. “You could meet eight people in a night, and one or two of those are at least going to be interesting.”

After seeing success in the US and Canada, CitySwoon is expanding its presence even further.

Next for CitySwoon is a focus on more global disruption of the speed dating scene. The company is continuing to roll out its service throughout the United States and Canada.

Events in New York and San Francisco are popular, and the overall response has been fantastic, Brett said. CitySwoon’s next plan is to develop an app of its own.

“We have a web application, but there are a few extra features we’ll bring to a mobile app in the next few months,” he said.

Ultimately, Brett and Louise said they find satisfaction in building a company that actually helps singles find the love they seek — in a romantic, fun way.

“The connections we help make is what keeps us going,” he said. “We just love it. It sustains us. It’s so different from a corporate job. At the end of the day here, you get a text message that says a couple that met at one of our events is getting engaged. You get a buzz from that feedback.”