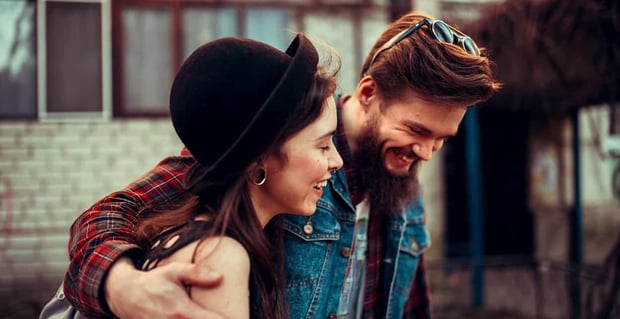 As Taylor Swift once intoned, “So it’s gonna be forever, or it’s gonna go down in flames.”

Relationships really only have two options, so we’re all going to go through a breakup of some sort before we find our lobster. And that is totally normal and fine!

What is the right length of time to wait before getting out there again? Is it better to wait a while or just jump right back into the fray? You’ll get conflicting advice from everyone. For example, “The only way to get over someone is to get under someone else” or “You have to wait half the time of your last relationship to be available for the next one.”

Everyone is different, and each of us processes things differently. So there’s no one-size-fits-all answer. However, we want to watch out for certain commonalities whether it was a 10-year marriage or a two-month fling.

One of the first things to consider is how long the last relationship lasted. If you are divorcing, chances are that you guys were together for a long time.

A divorce usually does not end simply and quickly. There are lots of things to untangle besides emotions. There are finances, properties, and possibly kids.

There’s a difference between ending a 15-year marriage and ending a five-month relationship.

This isn’t something that can get figured out and finished in a weekend. There’s going to be a process involved, so you’re most likely not going to be ready to start swiping two weeks afterward.

On the other hand, if the relationship was only a couple of months of dating, you may be ready almost immediately to look for a new belle. That leads us into the next point.

If the Relationship Ended Badly and You Haven’t Processed It, Give Yourself a Break From Dating

How quickly you can get back into dating is going to be directly related to how the relationship ended. If the two of you calmly and maturely decided to mutually and amicably end your partnership, you may not have a lot of things to work through.

If it was a slow withdrawal, you may have already had time to think about and process your emotions.

On the flip side, if you had an incredibly tempestuous relationship, and you found out she cheated on you with your brother and stole money from your savings account, well, you’re going to need some time.

Make sure you work through any anger, bitterness, or other negative emotions first.

The emotions that were there during the breakup are going to dictate the amount of time you’ll need to process things. There can be a lot of anger, bitterness, jealousy, guilt, and a plethora of other emotions.

However, people who realize that they need to break up with their significant other, spend the last few months of the relationship disengaging, processing their emotions, and looking toward the future. So, when the actual breakup happens, they are ready to get back out there and find someone new.

It Depends: Do You Want a Serious Relationship or Something Casual Like Friends With Benefits?

As a dating coach and carpenter, one of the metaphors I use is that of the toolbox. My job is to teach you about as many tools as possible and how to use. What each person then chooses to build with the tools is up to them. I have taught everyone from 15 to 70, and, obviously, different people are looking for different things.

A friend of mine named Nate got out of a relationship with a late-in-life virgin who he almost proposed to. The next thing he did was to get with an open-minded, sexually experienced cocktail waitress who liked to be choked. He wasn’t looking to jump right back into relationship territory, but he was ready to experience that which was lacking in his last relationship.

If you were in a relationship with someone who would put you down or make you feel bad about yourself, you may want to be around someone who makes you feel wanted and special. That’s totally OK!

Sometimes having a fling can help you move on.

I had another (former) friend who asked me for help moving his second ex-wife’s stuff out of his apartment. I figured it was just to clean house and get rid of memories, but no. He informed me that the first woman he started dating after the divorce wanted to move in, and he needed to make space.

I swallowed all my comments and realized that I didn’t think I could continue being friends with this person. He was just trying to replace what he had. He wasn’t trying to learn, heal, and move on. Don’t be like this guy.

The advantage of a breakup is that you now know more about what you do and do not want in a relationship and partner.

She may have been vibrant, exciting, and great in bed, but she compared you to ex-lovers and never made time for you. Maybe now you want someone a little calmer and more of a homebody.

Perhaps your ex liked your hobby, and you realize that you still want someone who likes to do the same things during their free time.

Think about what you’ve learned, and try not to make similar mistakes.

You should also consider what you did or did not do that may have helped lead to the breakup.

If you didn’t give your partner enough time, now you know to either spend more time with them or find someone who values their own personal time. If you loved that she was very organized, but you hated that she yelled at you every time you left a dirty dish in the sink, it could be that it’s better for you to have someone more laid-back.

Take what you have learned, and try not to make the same mistakes.

One of the reasons people want to get right back into the dating market is that they liked what they had and want it again. However, a lot of what people liked (comfortable silences, relaxing and binging TV, and lazy Sunday brunches) are things that come after a bit of time together.

Many singles want to try and rush back into the relationship part and skip right over the dating part. I get it; you want that easy intimacy again. But that’s only something that comes with time and getting to know someone. Don’t try and create something that isn’t there yet.

We All Heal Differently, So Do What’s Best for You

All of us are going to go through some sort of breakup at some point in our lives, and we all just have to move on.

That relationship didn’t work out for a reason. Be careful not to idolize the woman or the relationship as you look back on it. If you were meant to be together, you would be.

Now spend time on figuring out how to have an even better relationship and look toward the future!