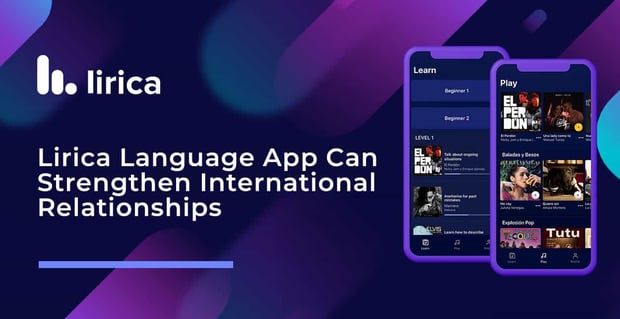 Lirica: How Jamming to a New Language Can Strengthen International Relationships

The Short Version: Lirica has created a unique language-learning playlist that can educate and entertain people across cultures. Since its launch in 2017, the Lirica app has used music as the primary instrument for learning a language, and its methods have struck a chord with an international audience. Lirica’s musical lessons and games aim to teach Spanish, German, and English as a second language. By translating the words of pop hits and love songs, Lirica can inspire a deeper understanding of languages and strengthen relationships in today’s multicultural dating scene.

British entrepreneur Paul Custance began teaching himself Spanish a few years ago in anticipation of work trips to Latin American. However, he soon became frustrated with flashcards, vocabulary apps, and textbook learning.

The Lirica app uses musical lessons to convey the fundamentals of another language.

Paul realized the traditional ways weren’t working, so he brainstormed nontraditional ways to make the Spanish words and phrases stick. He decided music was the answer to his problems. He downloaded Spanish songs and looked up lyric translations to understand the full meaning. As he got into a rhythm, he became more familiar with the Spanish language.

“I had to do it all myself,” he said. “And I thought it would be better if an actual teacher had created a song list and translations for me.”

Paul then abandoned his solo act and began a tech startup dedicated to revolutionizing the way people learned a second language. In 2017, Lirica launched with Spanish songs and lessons curated by experts. Today, the app has a varied repertoire of Spanish, German, and English songs that convey common words and phrases. The team is currently working on adding French songs as well.

Whether you’re gifting Lirica to a partner or using it for yourself, the app has the potential to break down language barriers through the power of music. Couples can use these lessons to build common ground through common language and strengthen their relationships one song at a time.

Lirica has found a new way to get language lessons stuck in a person’s head. Its music-based games have proven popular among young people who live in multicultural areas. The app has become particularly popular among millennials in the U.S.

“About 90% of our users are Americans,” Paul told us. “Which makes sense because Latin culture is so prevalent in the U.S.”

Over the last few years, Lirica has partnered with multilingual artists and international learning institutes to perfect its innovative music-based learning program.

Lirica started with Spanish lessons, but it has slowly but surely expanded to include other language-learning opportunities. By working with the Goethe-Institut, the Lirica team has been able to add dozens of German songs to the app.

Throw out your flashcards because Lirica rocks at teaching everyday vocabulary.

Learning Spanish via Lirica isn’t much different from rocking out to a salsa or merengue playlist. The curated learning program starts with reggaetón singer Nicky Jam asking a girl what her name is and where she’s from, and then it moves on to songs about saying goodbye or wondering what time a girlfriend will arrive home. These songs teach important conversational phrases to an undeniably catchy beat.

Lirica has fill-in-the-blank games and grammar lessons to make sure users know the lyrics by heart. The app can teach you the words to a Spanish love song and thereby help you deepen your grasp on the language.

In addition to its structured lessons, Lirica has a Play mode that allows users to explore songs at their leisure. The more users listen and interact on the app, the more “fans” they earn, and they can level up from Shower Singer all the way to Grammy Award Winner.

Paul said he wants to add a Challenge a Friend feature, so users can become more social and build relationships by challenging each other to the language games.

“With Lirica, our hope is you emotionally engage with the song so you remember it better,” Paul said. “It’s a learning process that is more interesting, more meaningful, and, hopefully, more memorable.”

Romantics Can Take Notes From the Songs of Latin Lovers

Fluency in another language can come in handy in a variety of situations. It can be an impressive talking point on a first date, or it could be the key to landing an international business deal. Plus, if you’re dating someone with a multicultural background, it could become the foundation for a relationship strengthened by mutual understanding and appreciation.

Lirica can set the tone for a fun exploration in another culture and another language. The musical playlists include Merengue classics and pop hits, so listeners get a full scope of the genres, artists, and melodies in a foreign industry. And some of it might just hit close to home.

Paul said he has heard stories of second-generation or third-generation Latin users learning the words to songs their relatives would sing or play years ago. It’s an opportunity for them to connect with their heritage in a unique way, and it starts conversations through a shared love of music.

“If you’re dating a Latin person, you have to engage with the culture of your partner, and you can do that with Lirica,” Paul said.

Lirica has a multicultural song library that embraces all types of music.

Over 1,800 users have reviewed Lirica in the App Store where it boasts an overall rating of 4.8 stars. The app has proven popular among users and industry experts alike. Apple has recognized Lirica as the App of the Day, and Google Play named Lirica among its Best Apps of 2018.

“I think this app is great for learning Spanish music I actually like,” said Carrie A. in a Google Play review. “I found Nicky Jam on Pandora, so it’s great to see him on this app.”

“Your app is phenomenal,” said John, a user who lives in North Carolina. “I’m a huge music guy, and your app is the first thing I’ve found to be extremely effective.”

Listening to the songs on Lirica can present a good opportunity for couples to discover new artists and music styles, work on their salsa moves, and set the mood for a fun night at home.

In the face of rising globalization, many adults find it useful to pick up a second (or third, or fourth) language so they can tackle personal and professional challenges. Lirica can empower individuals and couples to learn new words and explore a different culture without missing a beat.

The app’s musical language lessons are unique in the way they engage international audiences. It’s easy to play and sing along with Lirica, and its songs can offer the building blocks for a second language.

Whether it’s a slow serenade or an energetic mambo, music can tell a touching love story — and it’s even more meaningful if you know how to translate the lyrics. Lirica can give multicultural couples the words to express their emotions and grow their relationship to be more understanding and inclusive.

“We want to make learning another language a more fun and engaging journey,” Paul said. “It’s all about getting more content, more songs, and more languages on the app, so our users have the best possible experience.”