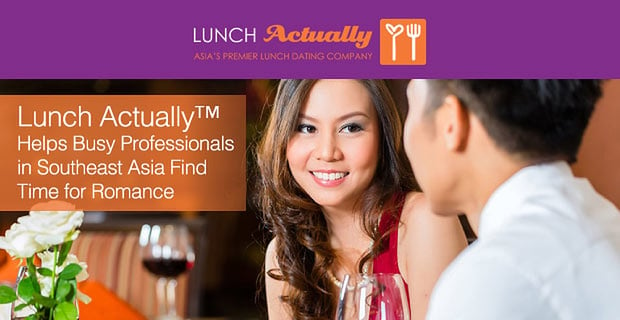 The Short Version: Violet Lim noticed that her colleagues at CitiBank in Singapore weren’t dating. It wasn’t that they weren’t interested in meeting new people; instead, their jobs kept them too busy to find love. One of the problems was that traditional dating typically took place during evenings when many professionals were still hard at work. In response, Violet co-founded Lunch Actually, a matchmaking service that unites daters over their lunch breaks. Not only are the stakes lower for lunchtime meet-ups, but the encounters are more likely to fit into a professional’s busy schedule. Since 2004, Violet’s lunchtime model has been immensely popular in Southeast Asia, and the service has arranged more than 125,000 dates.

At the Singapore CitiBank where she worked, Violet Lim found that her co-workers simply weren’t dating. Most weren’t married, or in committed relationships, they were just alone and not pursuing any prospects.

“I found that rather curious, especially since most of them were eligible and attractive,” Violet said. “So, I decided to dig deeper.”

She found the reason her colleagues weren’t dating was that they were too busy. So busy, in fact, that they would often joke that they didn’t even see daylight — as they arrived early and worked so late into the evening.

“Because they were virtually married to the bank, it was hard for singles to even meet other potential singles — let alone be in a relationship,” said Violet.

Violet also noticed that her swamped co-workers never cut corners on one aspect of their lives: their lunch breaks. Even if they had to work late into the evening — too late for a traditional dinner date — these busy professionals would still make time for lunch.

Violet later heard about the concept of lunch dating while she was traveling outside her home country. Then she wondered, if her single colleagues wanted to date but didn’t have time to do it, why not meet other singles over their lunch break? That’s when the idea for Lunch Actually was born.

“Lunch is short, sweet, and simple,” said Violet, the Co-Founder and CEO of Lunch Actually. “It is long enough to get to know someone, yet not too long to become awkward.”

Lunch Actually, which launched in 2004, hinges on the idea that daters can see if they click with a potential partner over one low-pressure meal. While the concept was initially aimed at working professionals, it is also effective for daters who want built-in time constraints for their first dates.

The matchmaking service is popular in Southeast Asia and is already responsible for 125,000 lunch dates — with an 85% match rate — and many more to come.

Lunch Actually’s typical singles are similar to the colleagues Violet worked with during her time at CitiBank. Many are well-educated, with the majority holding bachelor’s degrees and about 25% holding graduate degrees. Most are in their late-20 to mid-30s, still looking to start families of their own — and mature enough to be serious about settling down.

While the matchmaking service’s singles hail from many different professions, they typically share one trait: their work ethic.

“They are seriously looking for that special someone but, due to their hectic lives, can’t find them,” Violet notes.

In the 14 years since its founding, the matchmaking service has expanded its offerings for overcommitted singles. Lunch Actually’s premium matchmaking service, which matches clients based on personality and sets up lunch dates, is the oldest and most popular option.

For daters who aren’t entirely comfortable with their dating skills, the company also offers Lunch Actually Academy. Through the Academy, singles can improve their self-image, presentation, and communication skills. They can also work on their dating mindsets and begin to believe that they have much to offer in a relationship.

Two other products add another component to Lunch Actually. Integration With Peerage Matchmaking offers access to a database of elite dating options across Southeast Asia, as well as the ability to send gifts. And Viola.AI, a love advice app that uses machine learning, offers singles and couples dating and relationship advice.

“We have a lot of options,” Violet said. “We have more than 100 full-time associates and regional footprints in five countries in Asia. But, most importantly, we have helped more than 4,000 couples find happiness.”

Matchmakers Introduce Those Who May Not Otherwise Meet

Violet attributes much of the company’s success to its experienced matchmaking team. Not only do team members have the autonomy to operate in the best interest of their clients, but they also have regular meetings with Violet to discuss issues and success.

“When you empower associates with purpose and give them the support to grow, that’s when you can really see your company scale,” Violet said.

Lunch Actually has developed many successful matches as a result of its positive company culture. Sometimes, the matches are unexpected by clients, as they might be paired with someone who, on paper, doesn’t meet all of their expectations. But because they trust the matchmakers, daters are often willing to spend time with partners they wouldn’t otherwise choose.

Violet Lim is proud of the impact Lunch Actually has had on daters throughout Southeast Asia.

Violet told the story of one of these unexpected couplings. Chris, a lawyer, was paired up with Ben, a juggler and unicyclist. At first, Chris was furious at the match, believing that Ben wasn’t suitable.

“But we realized that they were very compatible. They have many similar values, as well as sharing a similar sense of humor,” Violet said.

Eventually, Chris agreed to the date. The matched pair got along famously, and, to Chris’ surprise, were engaged within three months. They now have two children.

“They probably would not have crossed paths had they not met through Lunch Actually,” Violet notes.

Ben and Chris are far from the only match to come out of Lunch Actually, and Violet often takes time to reminisce on all of the pictures and testimonials the company receives from happy couples.

“I don’t have one relationship I’m most proud of — I’m proud of all of them,” she said. “This business is not just about making money; it is about helping people find their lifelong happiness.”

Lunch Actually began as a way to pair up busy professionals — like whose with whom Violet worked at CitiBank — with other singles for low-pressure, daytime dates. And even though it is already Southeast Asia’s largest lunchtime dating service, Violet has much larger goals for Lunch Actually.

She has plans to expand the company to three new markets in the next three years, as well as reach out to more singles. The AI team will also roll out more features to help singles connect, and couples build their partnerships.

Lunch Actually also has its sights set on what it describes as a Big Hairy Audacious Goal (BHAG): creating 1 million happy marriages.

“There’s nothing more fulfilling than knowing that you’ve helped not just one person, but also generations to come. The result of what we do is so tangible. Many couples have thanked us because, without us, they wouldn’t have met and made a new family.” — Violet Lim, Co-Founder and CEO of Lunch Actually

For that goal to become a reality, the company is maximizing every lunch date it sets up. After all, the stakes are lower than they are with traditional dating because of the setting. And getting to know someone over lunch can feel more natural.

“Rather than always eating with people you already know, why not lunch with someone you do not know?” Violet asks. “Who knows, something might come out of it.”

And 14 years after she came up with a company that could combat her co-workers’ loneliness, she is pleased that she took a leap of faith to pursue matchmaking.

“There’s nothing more fulfilling than knowing that you’ve helped not just one person, but also generations to come,” she said. “The result of what we do is so tangible. Many couples have thanked us because, without us, they wouldn’t have met and made a new family.”

With this effective a model, then, perhaps it won’t be too long until Lunch Actually reaches its BHAG.