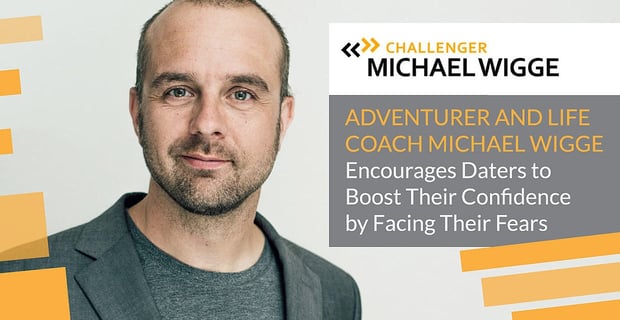 The Short Version: For more than 15 years, Michael Wigge has been an adventure personality who conquers travel challenges that he turns into documentaries and books. However, Michael has recently taken on a new set of challenges: motivational speaking and coaching. Through these new methods of communication, he helps people challenge themselves to overcome what scares them — in dating and life. While he values his adventurous life, Michael said he finds his latest venture to be much more rewarding.

Dating and relationship coach, author, and motivational speaker Michael Wigge was a staple of German television for more than 15 years. He interviewed celebrities on MTV — including Angelina Jolie — and later developed an adventure persona for various networks. By concocting ingenious schemes and then trying them out, Michael garnered an international reputation as someone who challenges himself.

One of the most daring examples of his adventurous spirit was challenging himself to travel the world for free. Michael completed the seemingly impossible task in 150 days, with the help of more than 100 people, after visiting 11 countries.

Dating coach and motivational speaker Michael Wigge challenges himself and his clients.

Later, he had another far-fetched idea: to trade an apple for a home in Hawaii.

“My goal was to barter an apple into a house in Hawaii, on the Big Island, and I did it,” Michael said. “That was a pretty spectacular adventure.”

The question, of course, is: How did this life of unbelievable exploits lead Michael into his latest venture as a dating and relationship coach and motivational speaker?

Michael wanted to pass on the lessons he’d learned through his adventures. Though his challenges had a higher level of difficulty than everyday challenges, teaching people to push themselves to overcome obstacles encourages rapid personal growth.

He isn’t always so different from his clients. As Michael notes in his TEDx Talk, he was a shy child who started working to expand his own comfort zone as an adult.

“At a certain stage, I decided I wanted to move forward and help others with what I’ve experienced,” he said of his work as a coach and motivational speaker. “I encourage my clients to overcome anxiety when it comes to dating. If you’re shy or anxious and have difficulty connecting with others, you can practice to improve.”

Michael’s adventurous life can be compared with the steps taken by a nervous single. Daters might push themselves to go to a bar, then talk to a woman, then ask the woman on a date — all “challenges” similar to the ones Michael set for himself.

For many of Michael’s clients, those challenges may seem as daunting as traveling the world for free. He mostly works with clients whose shyness or anxiety keep them from getting what they want out of life. His job, then, is to encourage them to do what scares them — even if that means they must conquer their challenges in smaller chunks.

“Figure out what your inner fear is and go through it, not around it,” he said.

Michael has written books documenting his various adventures around the world.

To help clients “go through” their fears, Michael encourages them to leave their comfort zones and continue practicing those skills that make them nervous.

“If we choose something as our challenge, and we’re willing to overcome the obstacle, it often ends up being not all that difficult,” he said.

Most of Michael’s clients are men and women in their 20s and 30s who want to change something about their lives. Some desire a new career, while others are having trouble finding a partner with whom to start a family. Michael is based in both Colorado and Berlin, Germany, but he has clients all over the world with whom he corresponds virtually.

When beginning work with new clients, Michael asks them to share what they need — and want — to change in their lives. Typically, clients have regular sessions with Michael, but they also need to complete between-session homework.

For example, a shy client might be asked to go out to a bar, so he or she can learn to feel more comfortable in groups. The most common problems his coaching clients report are shyness and anxiety.

“Most often, I see guys who lack confidence with women,” Michael said. “Even if they’re in the bar and getting anxious, they can call me, and I’ll motivate them to be successful.”

“Dreams and goals can only be fulfilled by taking responsibility for them.” — Michael Wigge

Michael also works with couples who are experiencing frustrations with jealousy and bickering that they can’t seem to overcome.

One of the most essential tools Michael provides his clients is what he calls “The Challenger Mindset.” The idea is that, if someone consistently creates goals for themselves that they meet or surpass, they can change not only their attitude but also their self-belief.

To develop this mindset, Michael asks his clients to create clear targets rather than vague goals and also encourages them to accept a bit of risk in achieving them. After all, a nervous dater can’t be so crushed by rejection from a stranger in a bar that he or she never tries again.

“Dreams and goals can only be fulfilled by taking responsibility for them,” Michael said.

Ultimately, he believes that single people and couples need to develop methods to examine their problems, find ways through them, practice habits, and normalize new actions.

Books and Videos Show Others How to Live More Spontaneously

Michael’s goal is to inspire clients and readers to add more variety to their lives. His travel books and videos can also encourage readers to take on a challenge.

“How to Travel the World for Free” documents the tools he used to travel the world without any money. The popularity of this book led him to appear on “The Tonight Show,” where he chatted with Jay Leno and pop star Katy Perry.

“She actually called me a cheap date, since I travel for free,” Michael said with a laugh.

Michael traveled through every state in the U.S. for his latest book, completing a challenge in each one. In Illinois, he challenged himself to find one of Hillary Clinton’s old friends within one hour of arriving in her hometown. His experience is detailed in the book, “Fifty States of Wigge.”

Travel or not, Michael aims to inspire clients and others by consistently forcing himself to face his fears. Every month, he exposes himself to things that scare him, including heights and crowds.

“In these little self-experiences, if fears come up, I always go through them rather than around them,” he said. “I always try to push my limits a little bit further. I do this on a monthly basis, and then I blog about it.”

For those who can’t make one-on-one coaching sessions with Michael, reading about his adventures can teach them how to seek out more surprise in their own lives.

Michael’s challenges aren’t all that different than what most people go through as daters and in other relationships. In both cases, people pushing the limits of their comfort zones can produce extraordinary results.

“Those similarities were how I changed from an adventure dude to a coach,” he said.

With all of his trendsetting travel and hobnobbing with celebrities, Michael certainly has an exciting life. Still, though, he suggests that his work as a dating and relationship coach and inspirational speaker is even more satisfying than his challenges.

“It was really entertaining to challenge myself, but to support someone in embracing change is much more fulfilling,” he said. “Helping people is the most fulfilling challenge I’ve had thus far.”