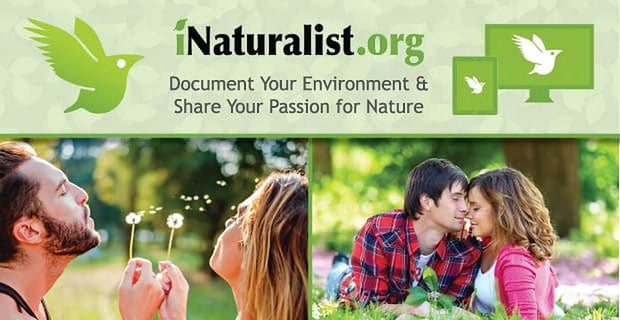 Nature Lovers Come Together on iNaturalist.org to Document Their Environment and Share Their Passion

The Short Version: Created for nature lovers seeking connection, iNaturalist invites users to forge a relationship with the outdoors and one another. Their active online community of environmentalists, scientists, and outdoorsy people often post, browse, and comment on photos of organisms from around the world. Since iNaturalist’s founding in 2011, nearly 4 million observations have been shared by naturalists. Nature enthusiasts can also socialize in person by attending BioBlitz events, which challenge people to record as many organisms as they can within a certain span of time. iNaturalist.org welcomes people of all backgrounds in a social environment ideal for meeting people, appreciating the natural world, and bonding through shared interests.

When I was 17, my boyfriend spent three months in Belize on an archaeological dig with his family. That was good news for me because writing a sappy, romance-infused letter once a week was about as much commitment as I was looking for at the time.

While camping with my Girl Scout troop, I wrote him a letter under the glow of a flashlight, and I waxed poetic about the sounds of crickets I heard around me. “They’re like us,” I said, “calling across great distances for one another until the night fills with their song.”

I was a teenager with a flair for the dramatic, and my boyfriend ate it up. He wrote back about his own lush surroundings and how the mystery of the jungle intrigued him. “Kinda like you,” he added with a winky face. His descriptive letters, postcards, and emails made me feel like I was there with him, battling diabolically huge spiders and snatching glimpses of colorful birds overhead.

By sharing our wonder of nature, we became closer as a couple, even though we were actually thousands of miles apart. In the same way, iNaturalist.org facilitates bonds between nature lovers around the world on a site made for posting and discussing the flora and fauna found in woods, lakes, fields, swamps, or even your own backyard.

Observations on iNaturalist let people know where they can find a particular plant, bug, or creature.

iNaturalist users record what they see on their outdoor treks and share it in a community of environmentally-conscious people. Since their founding in 2011, users have posted nearly 4 million pictures of organisms from all parts of the world. Open to anyone fascinated by the outdoors, this website welcomes thousands of users coming together online to identify critters and relate their experiences.

“The core mission of the whole enterprise is to connect people to nature,” said Co-Founder Ken-ichi Ueda. “A lot of people give lip service to protecting the environment without actually knowing the environment on a personal level. We introduce people to the organisms around them, and a big part of that is doing it socially.”

iNaturalist maintains a community of 350,000 registered users, 17,000 of whom are actively interacting on the site on a day-to-day basis. Some are students on assignment from their teacher, but many others are naturalists truly passionate about wildlife.

Ken-ichi described the typical user as “an adult who isn’t raising children,” reasoning that they’re the ones with the funds and time to explore the outdoors. As a whole, iNaturalist users are people who value environmental protection and biodiversity, so they’re worth getting to know. They can even tag your photo with an identification, so if you don’t know what kind of bird or bug you saw, someone can classify it for you.

Ken-ichi said some users form niche groups around particular plants or animals. “There are even cadres who love land snails,” he added with a laugh. “That’s something unique to this site. You don’t find many land snail societies out there.”

This crowdsourced species identification system puts nature at the fingertips of anyone online. You can browse through observations by location, species, identifier, or observer. The world is your oyster.

“It’s pretty easy,” Ken-ichi said. “You can use your desktop or browser and choose a photo to upload to the site.”

From ants to zebras, all kinds of animal and plant life have been posted on the site, and the collection is always growing as more people get out there and discover what the natural world has to offer.

A BioBlitz event gives naturalists the chance to go outside in droves to record organisms within a certain time period (ranging from one hour to one week) and in a certain place. These projects are often organized by schools or academics seeking to learn about the area, so volunteers help their community while exploring the outdoors together.

These events are a good date activity for outdoorsy and competitive couples looking for an excuse to get off the couch and wander around a park, campsite, or some other public place.

“No matter where in the world you are, iNaturalist brings people together. Whether you have a Ph.D. or just love the outdoors, iNaturalist will bring you closer to nature and [to] many fellow naturalists.” — Carlos G. Velazco Macias, Biologist

The observations collected during BioBlitzes are often relevant to the study of biodiversity. “If we know, for example, that a pelican was at that place in that time, that piece of data can be really useful scientifically,” Ken-ichi explained.

iNaturalist doesn’t host BioBlitz events, but they do list upcoming projects and provide user-friendly infrastructure to participate and keep track of your observations. You can check out their BioBlitz calendar to stay up to date.

“iNaturalist is predicated on the physical world activity of getting outside and looking at stuff, and BioBlitzes provide the opportunity to meet people you only knew before by their profile pics,” Ken-ichi said. “When you go together, you can learn to pay attention to what other people pay attention to, and appreciate your surroundings all the more.”

Since 2011, iNaturalist.org’s Team Has Celebrated the Natural World

The inspiration for iNaturalist came in 2008 as part of a final project for grad students Nate Agrin, Jessica Kline, and Ken-ichi Ueda, who attended UC Berkeley’s School of Information. What started as a side gig soon grew as Nate and Ken-ichi continued working on the site long after graduation.

Ken-ichi Ueda, iNaturalist.org Co-Founder, built the site to combine his love of nature and the web.

Working in collaboration with Scott Loarie, now Co-Director for iNaturalist, these nature lovers officially founded the company in 2011, planting a seed that would grow into an international social network.

“We’re a pretty small team,” Ken-ichi said. “It’s still got a little bit of a start-uppy feel. Decision making is pretty communal, and we all work well together.”

The dedicated team of developers, designers, and directors combine their talents and passion to raise awareness about environmental issues and make the site more interactive for naturalists everywhere.

The team is full of nature enthusiasts like Ken-ichi, who, according to his bio, “used to horrify my mom by waltzing into the house holding snakes and salamanders.”

iNaturalist Helps You Appreciate the Outdoors in a Social Setting

If my boyfriend had just stayed in Belize and kept writing letters dense with vivid imagery and clever simile, we probably wouldn’t have broken up. But, alas, teenage love is always better from a distance. Still, whenever I dig up his postcards and letters, I can’t help but smile and feel a renewed sense of awe for the natural world.

Founded in 2011, iNaturalist brings people together to appreciate living organisms in nature.

That connection to people through nature is a strong tie. After all, outdoorsy types have to band together to protect the environment and preserve these experiences for future generations. This is a mission close to the heart of iNaturalist.org, which offer thousands of recorded observations to facilitate the research of biologists and encourage enthusiasm for wildlife of all shapes and sizes.

For daters, this online community is a resource to help you get involved, attend an event, and meet people who share your interest in nature.

“I think people remember their interactions with nature better when they do it in a social context,” Ken-ichi commented. “That could mean going on a hike with someone else or posting a picture of a bug and realizing there are people out there who also care about that bug as much as you do.”