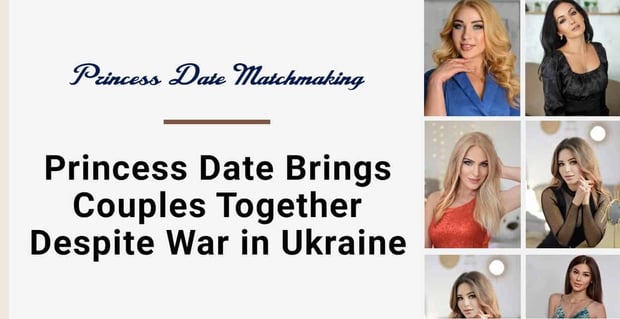 The Short Version: Yuliia Saurina founded Princess Date Matchmaking as a way to find quality partners for her beautiful and talented friends in Ukraine. She quickly grew the business into a popular international matchmaking service, connecting men abroad with women in Ukraine and other parts of Eastern Europe. After the Russian invasion of Ukraine at the start of 2022, Yuliia and her team have transitioned their work to being fully remote, and they continue to serve singles across the globe.

In 2009, Yuliia Saurina was working as a makeup artist in a beauty salon in Kharkiv, Ukraine. She loved her job and grew close to the other women who worked in the salon. As she got to know her coworkers, she saw how wonderful they were as people and how much they had to offer. Most of the women were beautiful, talented, kind, and family-oriented. Yet still, the vast majority of them were either single or divorced, despite wanting a traditional family structure.

Yuliia said she felt that women all over Ukraine struggled to find fruitful relationships, just as her coworkers did. There was an abundance of beautiful Slavic women who struggled to find quality partners in their hometowns. Yet there were plenty of upstanding men abroad who Yuliia knew would appreciate Ukrainian women.

While Yuliia enjoyed her work in women’s makeup, she realized she had a larger calling: finding women love. She decided to start by finding partners for those same women she worked with at the beauty salon.

She had her photographer sister take portrait photos of her new clients, and then Yuliia went about the work of finding them relationships. She earned her matchmaking certificate from the British Matchmaking Academy. Soon enough, Princess Date Matchmaking was born as a classy, safe way for Ukrainian and Eastern European women to find partners abroad.

While Yuliia, her clients, and Princess Date Matchmaking as an organization have all been rocked by the war in Ukraine, the company is still going strong and taking care of its people. Princess Date Matchmaking offers a personalized, values-driven option for singles looking to find love. Even in the face of destruction, Yuliia is committed to helping all of her clients find the person of their dreams wherever they might be.

As long as singles are looking for a fulfilling long-term relationship, Yuliia said she will do everything in her power to find them love. “As a matchmaker, there’s no specific type of person who I won’t accept, based on age, job, or anything else,” Yuliia told us. “As long as people have realistic expectations about the matchmaking service and don’t expect a miracle — even though it can happen sometimes — I’ll work with them.”

Princess Date Matchmaking is unique in its emphasis on shared values for its couples, no matter their country of origin. The service allows singles to forget about the more practical factors of dating like proximity and instead, focus on finding a partner who wants the same things out of life.

The women who use Princess Date Matchmaking come from traditional families, which they want to emulate in their own lives. Disenchanted with the unraveling family structures in their communities, they look abroad to find partners who are willing to provide a stable support system. Even if they hope to work outside the home in some capacity, they are more concerned with raising children and keeping a happy home.

“The male clients all have one common thing in common: they all are looking for lady with traditional family values,” Yuliia said. “They don’t want to date women who only care about their career. They want to date women who like to be led by their man, even if she has her own business, she still accepts that the man is the head of the family.”

It’s especially important to the women looking for partners that they find someone who is willing to support them, especially as they move to a new place. They need to feel protected and secure in their country. Additionally, Yuliia emphasizes the importance of her male clients being clear about their intentions and taking the lead in dating. For the women to move to a new country for their partners, they need to know their partners’ intentions for certain.

The women who use Princess Date Matchmaking are, by definition, brave individuals. “The girls are all very different, but they are all brave and open-minded,” Yuliia said. “Many of them end up changing their lives completely in moving to a new country.”

Matchmakers Who Care About Their Clients

Yuliia and her team are committed to making sure that their clients have the best possible experiences in love and in life more generally. They take the time to get to know everyone who uses their service and understand the specifics of their circumstances. The team’s personalized approach to matchmaking allows them to serve their clients well and with excellent results. Yuliia even told us that she was able to find her childhood music teacher a wonderful husband in Denmark. Yuliia and her team members are able to use their skills to better their clients’ lives and even the lives of some in their social circles.

Since the Russian invasion of Ukraine, Princess Date Matchmaking has worked hard to ensure the well-being of all who use its matchmaking service. Yuliia even has a psychologist on staff to help some of the women process the issues that are coming up for them in the war and to help promote their good mental health. Times are hard for women in Ukraine, but Yuliia is doing all she can to make dating a positive and safe experience for the women in her program.

Yuliia and her team have even worked to help their clients in ways that may seem over-the-top for a matchmaking service, but are necessary in the crisis. One couple who met through Princess Date Matchmaking was struggling emotionally early in the war, as one partner was in the Netherlands while his girlfriend was still deep in Ukraine with little chance to get out. Upon hearing of the situation, Yuliia’s team decided to help the couple by driving the woman to the Polish border. The trip took three days, but was totally worth it.

“I still remember how they met at the border, with their eyes full of tears,” Yuilia said. “Now they are living happily in Holland.”

Princess Date Thrives, Even During Conflict

The war in Ukraine has added some chaos to life for all Ukrainians, including Yuliia and her clients. But the team at Princess Date Matchmaking is rolling with the changes. While they previously had two offices in Ukraine, the whole team now works remotely from abroad. And since much of their work consists of coordinating relationships for international couples, little of their job has actually changed much.

When the war started, Yuliia and her team thought that their business would collapse. But luckily, they were very mistaken. “Our clients became more active,” Yuliia said. “After February, we had three proposals, two marriages, and more than 20 couples meet each other in different parts of the world. I think it happened because people somehow became braver, and women had less, making them want to stay in Ukraine.”

In the face of tragedy, many of Yuliia’s clients are able to find love.

Coordinating love in a war can be difficult, but Princess Date Matchmaking is working to bridge the gap of understanding between those directly affected by the conflict and those waiting for their partners on the other side. “Not all the clients can understand what is really happening in Ukraine,” Yuliia said. “Some asked the girls for photos proving that they’re in a war, and some were insisting that they talk to their partner nonstop and thought that if they weren’t active they weren’t interested. As a matchmaker, I need to manage and explain that now things are be different, but women still want to find love as men do, just sometimes they need to hide in the bomb shelters.”

Still, Yuliia and her team look forward to a day when they can go back to Ukraine safely and set up work at home. But until then, Yuliia will continue her work from New York where she now resides, as will her team in other parts of the world. “We never stop thinking about our clients, and we never stop looking for partners for them,” Yuliia said.