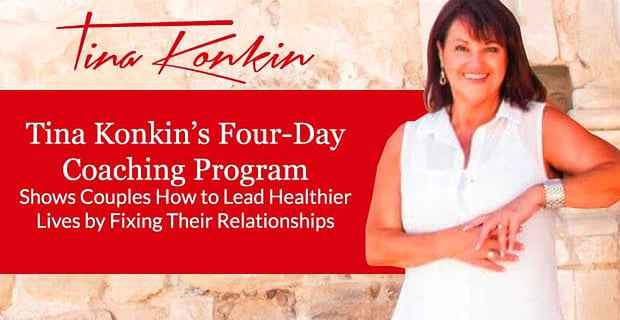 The Short Version: Relationship guru Tina Konkin started her mission to heal broken hearts by seeking a way to heal herself and her marriage. Over 30 years ago, Tina and her husband Ron were considering divorce when they attended a five-day couples counseling workshop. The experience changed them on a fundamental level by bringing to light how their past pains were birthing new heartaches. After the workshop, Tina felt empowered to renew her relationship and become a better wife and mother — but she didn’t stop there. She and her husband took training courses and became professional relationship experts capable of running couples workshops of their own. Today, the Relationship Lifeline program has inspired countless couples in California to look inside themselves and identify what’s going on in their own hearts so they can find a healthy way forward.

Tina Konkin was involved in a lot of compassionate youth work as a young woman, however, once she got married, she found her compassion came in short supply. At home, Tina was a screamer. She shouted at her husband and children, growing frustrated and resentful when they withdrew from her.

Tina and Ron Konkin worked through their marital problems by attending a five-day couples workshop.

For years, Tina’s family struggled to communicate their hurt with one another. Their relationship grew more and more distant as Tina’s emotionally abusive treatment of her daughter then 10 years old affected Ron.

Tina’s treatment of their daughter was what led them to a therapeutic experiential program run by Dr. Phillip McGraw’s partner before he became Dr. Phil, the TV personality. Years of resentment and ill-treatment resulted in an affair that threatened to end the marriage.

During the program, Tina and her husband explored the reasons behind their actions and grew to understand what childhood experiences influenced their beliefs and behaviors. Tina realized that she was mimicking her father, who would yell and chase her with a belt but never hurt any of his children. In her mind, screaming was safe, and it was her mother’s quiet discipline that was dangerous.

The couple then learned how to work through their disagreements in more constructive and healthy ways. The five-day program opened their eyes and inspired them to change. “It totally changed our lives,” Tina said. “This program literally saved my life, saved my kids, and saved my marriage.”

Inspired by the transformation they saw in their personal lives, the couple decided to dedicate their professional careers to helping others have a similar experience and rescue their relationships.

Today Tina is the Founder and Director of Relationship Lifeline in Orange County, California. She has spent the last 30 years running seminars, giving speeches, and comforting the brokenhearted. Her Couples Retreat has been incredibly successful at helping couples recognize their triggers and misconceptions in a nonthreatening and healing environment.

“We’re not therapy or counseling, but we’re a very experiential program,” Tina said. “We help people look at what’s not working in their relationships through exercises and games in small groups.”

An Intensive Retreat Gives Couples the Space to Talk & Heal

When Tina started her relationship program, she wanted to stake out a middle ground between pre-marital counseling (when couples are still blissfully happy) and crisis couples counseling (which likely is too late to fix the hurt and rebuild trust). Tina designed the Relationship Lifeline program to be an intensive detox for couples on the road to recovery.

“My purpose has always been to heal relationships one broken heart at a time,” she said. “I believe the individual heart has to get healthy before two hearts brought together can be healthy.”

The Relationship Lifeline and Lifeline for You programs last four days and offer emotional revelations that can be life-changing for couples and individuals. Tina said she typically sees anywhere from 16 to 20 couples at the regular program, but she also offers a more exclusive and private couples retreat for Orange County residents who value their privacy.

The couples retreat follows the same program as the other workshops — but it takes place in an all-inclusive five-star hotel and provides a personal relationship coach for each couple participating.

In Tina’s view, talking for an hour once a week isn’t enough to truly help couples reset their expectations and resolve their disputes. That’s why she offers an in-depth program where couples spend a long weekend learning, growing, and healing. Whether you’re seriously dating or in a committed marriage, you can attend the Relationship Lifeline to give yourself the relationship knowledge and self-awareness necessary to move forward and avoid common mistakes in building communication and trust.

“We have put up walls made of one rock at a time,” Tina said. “We harden our hearts to not feel that same pain again. Our program is about tearing that down so we can have healthy relationships.”

Tina understands that the work isn’t over once the four-day retreat comes to an end, so she offers follow-up coaching sessions and other instrumental self-help programs to give couples the tools to stay committed to one another. The Renew YOU coaching program was designed to motivate seminar participants to keep moving forward with their newfound knowledge and sensitivity.

By working individually with couples, Tina can have a long-term impact on their mindset and choices. She trains couples to take a compassionate and joy-filled attitude in everything they do.

“Our life is truly changing due to the opportunity to grow and learn more about each other and ourselves.” — David and Cindy Meek, participants in the Relationship Lifeline program

Her process is unique, simple, and effective. Tina calls it the R3 approach — reveal, rewrite, and renew. The first step is revealing what toxic thoughts, beliefs, or emotions are holding couples back from true intimacy. This step is often the most difficult because it involves getting to the root of a problem and exploring the pain beneath the conflict.

“We all do things to escape pain, so it’s about revealing what we’re doing to escape pain,” Tina said. “What we do is go beneath the symptoms and find out what the root is — whether it’s rejection, shame, guilt, or abuse.”

The next step is rewriting the story and reframing experiences for the better. Each individual in the relationship has to rewrite their own personal stories so they can move forward together.

The last step is renewal. Once a couple has changed their patterns of behavior, they can renew their relationship and start fresh. They can use the lessons they learned from the Relationship Lifeline or Renew You Coaching to transform their relationships, their families, and their lives. This is critical because healthy couples can raise healthy children.

These hands-on relationship programs have made a difference in the lives of countless couples and families in the US and Canada. Some couples sign up looking for closure as their relationship comes to an end, and they end up learning so much about themselves and each other that they want to give the relationship another try. Tina said many marriages have been saved thanks to the four-day program, which is more approachable and engaging than a typical therapy session.

“We don’t lecture,” Tina said. “We don’t look at the relationship or marriage. We look at what you’ve brought into it. In other words, it’s your belief systems, the different way you think and believe. We are the culmination of what we saw, heard, and experienced as children and adolescents.”

“In the workshop, I discovered my strength and also the strength that comes from sharing and possibly helping others with my story.” — Mercedes Seraphim, a participant of Lifeline for You

Spending a few days at a rejuvenating retreat can be good for couples in a relationship, but it can also help individuals better themselves in other ways as well. Tina said she has seen many people excel at their jobs in the months following the seminar because they’ve mastered effective communication skills. Participants often feel empowered to go after the life they want and free themselves from the hang ups that held them back in the past.

“It reframed our perspective in a way that counseling never could have done in the little time that we spent over the weekend,” said Jason S. about the Relationship Lifeline program. “You must do this. It’s an investment for yourself, you wife/husband, your children, and your future.”

Because Tina and her husband had different experiences with shouting when they were growing up, their communication styles as partners and parents didn’t mesh at first. They had to recognize the false beliefs behind their actions — in Tina’s case, that shouting was safe — and correct the unhealthy habits instilled in them since childhood.

After 30 years of soul searching, Tina has now developed an in-depth relationship curriculum to come to the assistance of couples all over the country. “We help you identify your triggers through looking back,” she said. “We go into discovery mode. We help you in that discovery process as you look at what isn’t working and why it’s not working.”

Tina believes that both individuals in a relationship must be healthy and emotionally secure before they can raise healthy children. Her mission is to get adults to that point so that they can be positive role models for their children.

“Any issues that are unresolved from our past, we carry with us into our future,” Tina said. “Our purpose is to resolve the past so it’s not affecting healthy decisions in the future.”