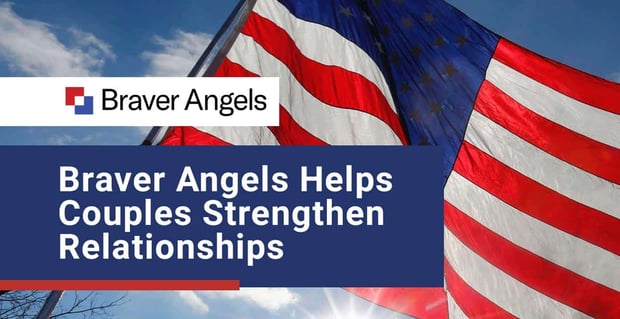 The Short Version: Braver Angels has strengthened relationships by helping singles and couples learn civil discourse tactics. The bipartisan organization launched in 2016 to advocate for rational and respectful debate on potentially divisive issues. Braver Angels fosters healthy political debates through in-person and virtual workshops. Couples who disagree politically can engage in these events to find common ground — or at least a sense of understanding — and get one step closer to becoming a more perfect union.

In today’s hyperpartisan landscape, most American singles have decided that politics is a dealbreaker in their relationships. In a 2020 survey, about 75% of the 5,000 singles surveyed said they would not date someone of the opposite political party. This number has increased significantly within just a few years.

“Only half of the survey participants felt that it was so vital as recently as three years ago. And before that, the numbers hadn’t budged since the study began,” wrote Belinda Luscombe for Time magazine.

Dating within the same political party may seem comfortable, but it can be harmful as well. It limits understanding and undermines empathy. We can learn from others who don’t share our political persuasions. If couples can disagree cordially, they can consider opposing viewpoints and challenge their assumptions. Experts at Braver Angels say that could be a powerful thing for the dating and relationship space.

Braver Angels is a nonprofit organization that seeks to change minds and soften hearts by facilitating a sense of community that transcends political stances. This group is building a bridge across political lines and inviting people to participate in friendly, moderated debates.

This work is more important than ever in the U.S. where political gridlock and vitriol seem to dominate the dialogue. Braver Angels encourages people to put their biases and talking points aside, if only for the space of a workshop, so they can discover new ways of thinking and being.

This moderate group’s message is clear: Americans are one people regardless of their politics, and they should treat each other as compatriots rather than enemies.

“Listening to someone who thinks like you do on all subjects may eventually lead to a certain staleness. Difference is often exciting whereas sameness can be boring. Allow your partner to push you into new territory — it may be a path to a richer life,” notes Stephen J. Betchen, D.S.W.

How to Disagree Respectfully Amid a Partisan Divide

Braver Angels started in 2016 after the heated election between Donald Trump and Hillary Clinton. Political tensions were high, especially in the battleground state of Ohio. The nonprofit chose this Midwestern and historically purple state to host its first Red/Blue Workshop. An equal number of Republicans and Democrats showed up for a spirited dialogue, and a trained moderator ensured the discourse remained civil.

“The goal was simple. We needed to see if Americans could still disagree respectfully — and just maybe, find common ground. Some thought it wasn’t likely. We proved our skeptics wrong,” the Braver Angels team said.

Over the next five years, Braver Angels has helped participants with different political affiliations learn to communicate productively. The organization started holding these workshops and debates across the country.

In March 2020, Braver Angels had to pivot to online debates and workshops to make sure its operations were COVID-safe.

Within a month, the Braver Angels team transitioned all of its in-person events to online video meetings. These passionate uniters brought the spirit of compromise and compassion to the Zoom environment, and the change proved to be mostly positive.

Virtual events have allowed Braver Angels to reach more people across the country — or even outside the country.

Debates Can Connect Liberals and Conservatives

Before the online shift of 2020, the Braver Angels team didn’t always have the equal representation of ideas it desired. Sometimes it was difficult to find a local person who wanted to attend the event and express certain political opinions. The events were bipartisan, but they seemed to attract more liberal than conservative attendees.

“Shifting all of our programs online opened the opportunity to balance a workshop or a debate. You don’t have to look around the host city, you can look at the core of the Braver Angels’ national community. Here’s an event, we need a couple reds to represent,” Luke told us.

Over the last year, these online debates have gotten significantly more viewers than any in-person session ever did. Some online debates have attracted more than 400 viewers. What’s more, the online format has engaged both rural and urban participants in a way that wasn’t possible in community-based events.

“Having debates and workshops that are truly national has been a different conversation,” Luke said.

Watching a debate can encourage couples to adopt conversational tactics and attitudes that strengthen their relationship dynamics. The parliamentary format ensures that participants don’t attack one another or use harsh language. It also invites participants to talk and ask questions with the goal of fostering learning and better understanding for all.

All types of relationships can benefit from practicing civil discourse. Braver Angels debates elevate the tone of political talks and create bonds wherever possible. You don’t have to participate in the debates to get something out of them — many people choose to remain silent and exercise active listening as their way of participation.

Braver Angels pivoted to online sessions out of necessity, but this format change has proven to be popular and effective. The organization created a platform where people of all backgrounds could voice concern or ask questions and learn to see the other side of an issue. Sometimes the events sparked a friendship across the political aisle, and some couples found useful tips for navigating political disagreement in their relationships.

“The organization was able to consolidate into a well-oiled machine over the course of 2020. We were better able to do our job,” said Luke.

In the coming years, Luke and the Braver Angels team are gearing up to promote both in- person and online events for any American who is willing to talk and listen.

Braver Angels is working on its fall programming and planning nationwide tours for its more popular speakers.

“For us, 2021 has been a time for consolidating the lessons we learned in the last 18 months and figuring out how to frame our work,” Luke told us. “That means institutionally solidifying online things to bring our work to people all over the country.”

Braver Angels promotes respectful disagreement and factual debate. People in cross-political relationships can learn from watching these conversations unfold. Luke said he hopes more Americans see the value in their fellow citizens, regardless of their political leanings.

“There will be more 2020s, more periods of trauma, more moments in national history where we are tempted to stop having civil discourse. I hope the work we’re doing will help us to be able to use deliberative skills and goodwill of American democracy to get us to a better country,” he told us.