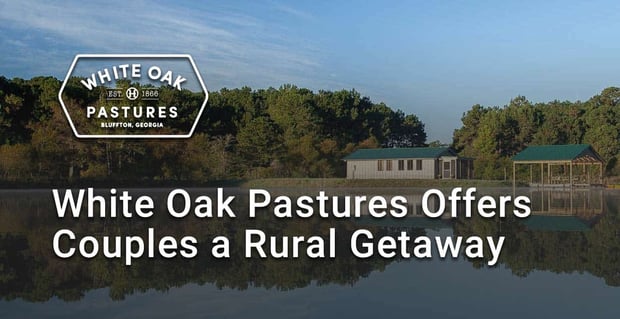 The Short Version: White Oak Pastures is a sixth-generation farm in Bluffton, Georgia, that has become a model for sustainable meat farming. It shifted to regenerative agriculture, which seeks to rehabilitate and enhance the entire farming ecosystem by focusing on soil health, water management, and humane animal husbandry, among other conventions. The 152-year-old family farm invites couples to experience its natural beauty and green practices. Couples can digitally detox while staying in one of the farm’s completely unplugged cabins and enjoy plenty of activities and amenities. For providing couples with an idyllic country setting to unwind and learn more about farming, White Oak Pastures earns our Editor’s Choice Award.

When couples decide they need to get away from their hectic lives for a weekend, they often want to go somewhere they can completely unplug. That’s the case with many visitors to White Oak Pastures, a sixth-generation farm in Bluffton, Georgia. But couples can also get something else while there: a lesson in sustainable farming.

Visitors can book one of the farm’s six log cabins near a pine forest. Each cabin includes its own bathroom and kitchen, and is designed for a digital detox: no TV or Wi-Fi connection. That’s because the property’s owners, the Harris family, want guests to explore the farm and learn about the sustainable methods it practices.

“It’s an opportunity for people to unplug and connect with nature. In a day and age where you can’t go anywhere without your cellphone, we find young professionals who commit to getting away from technology,” said Jenni Harris, White Oak Pastures Marketing Manager.

A typical morning begins with waking up to chickens and cows roaming the grounds outside the cabin door. Couples may decide to take a walk in the woods before touring one of the farm’s production facilities, where they learn more about how their food is processed. Later, they can visit nearby Bluffton, a small town that maintains many of its rural charms.

“It’s been labeled a place that time forgot, our modern-day Mayberry,” Jenni said.

At night, couples can bond over a meal at the on-site restaurant, The Farmers Table, with farm-fresh hamburgers on the menu. And when they head back to the cabin to call it a night, they can enjoy the sounds of the country as they drift off to sleep.

Partners Can Escape Their Hectic Lives Together

After generations of farming at White Oak Pastures, the Harris family turned the cattle farm into a more sustainable operation that included tourism.

“My family has always raised livestock. My father transitioned the commodity-type farm where we only fed cattle to a polycultural land-focused model. We move our livestock frequently to minimize their impact on the land. Soil health is the center of everything we do,” Jenni said.

White Oak Pastures’ new mission has also allowed the farm to become carbon-negative, as it takes more carbon out of the environment than it emits. And those sustainable, progressive farming practices attract many guests — and even other farmers — who come to visit.

One of the most interesting aspects of a stay at White Oak Pastures is touring its meat processing plants. In 1960, farmers could choose to process their animals at one of more than 10,000 plants. Today, that number has dropped to 2,200, with most plants already at full capacity processing large-scale farming operations.

Couples can digitally detox in one of the property’s cabins and enjoy seeing farm animals.

“That created a centralized system where farmers like us can’t exist. Farmers raise animals, and people want to buy meat, but the middle section is gone,” Jenni said.

Many people want to explore how to bring that middle section back into the equation. That’s why guests often want to see the processing practices White Oak Pastures has innovated.

“Our plans will include some on-site, on-farm training sessions so young people can come here and replicate what we’re doing,” Jenni said.

Not everyone who comes to stay at White Oak Pastures is a farmer, either. Others are concerned with strengthening rural economies or promoting farm animal welfare.

“It’s not just one demographic of people who visit us, but all of their core missions and values are emotional. They’re human values,” Jenni said.

Shipping Delicious Meats Across the Country

Those who can’t visit or stay at White Oak Pastures can still sample the farm’s delicious meats, and many people stop at the farm’s general store before heading to the mountains or the beaches of the Gulf Coast.

Even if you don’t live near Georgia, you can still buy ethical meat products from the farm. Each month, White Oak Pastures ships 5,000 to 6,000 orders to meat lovers around the country.

When people buy meat at the grocery store, it usually comes from a factory farm. White Oak Pastures believes that type of farming is harmful not only for the animals and the land but also for rural communities.

Some might argue that buying meat substitutes made from plants is better for the environment. However, many of these companies that use soy or other grain products can produce more carbon than they would with pasture-raised cattle. But cattle can sequester carbon, storing the carbon in the land to reverse or mitigate the pollution.

The meat produced on White Oak Pastures is pasture-raised and organic. The animals live better lives, and the type of farming is better for the soil.

The meat itself is also shown to have positive health effects. According to a White Oak Pastures blog post describing why pasture-raised meat is better, “There is documented research in circulation that states pasture-raised proteins are now being used in preventive healthcare and treatment plans for illnesses. It’s time to realize that nutritious food truly is medicine.”

While traveling too far from home is discouraged during the Covid-19 pandemic, a getaway to White Oak Pastures is a feasible alternative for people in the area. Jenni said the farm has had guests staying in their cabins throughout the pandemic because they knew they could maintain safe social distance on the 3,000-acre farm.

“We’ve had people sheltering in place here, so they socially distance, but aren’t holed up in an apartment in a city,” Jenni said.

Even if travelers come to the farm to relax, the Harris family hopes they’ll leave with a better understanding of the importance of polyculture farming.

“Historically, we thought a monoculture would yield the best cattle, but they benefit from living with goats, sheep, and hogs. Nature abhors monocultures. When you drive in the country, you don’t see woods with just birds or rabbits,” Jenni said.

This type of regenerative agriculture is the Harris family’s shared passion. Both Jenni and her sister work on the farm and say they are on a mission to continue making a living off the land.

Any revenue they make from meat or tourism can help them continue that mission to the next generation. They said they’re also excited to show the farming operation to anyone interested.

“If people decide they want to visit, that’s great. We’re delighted that people want to see us,” Jenni said.